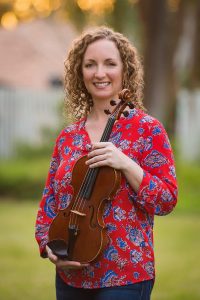 Abigail Albaugh, M.AmSAT, originally from Annapolis, Maryland, received degrees in violin performance from East Carolina University and University of Michigan. She is the winner of the Raleigh Symphony Orchestra Concerto Competition. Performing in various festivals and ensembles, Albaugh has toured England, Iceland, Scotland, Austria, the Czech Republic, France, and Canada. Albaugh has been a member of the Wilmington and Long Bay Symphonies, the Atlantean Piano Trio, and was a founding member of the Caretta Quartet. She was an alumni guest artist at the 2013 Four Seasons Chamber Music Festival, as well as the East Carolina Summer Chamber Music Institute in 2018 at East Carolina University. In the summer of 2015, Albaugh joined the bluegrass band Massive Grass and has performed with them at Floyd Fest and the International Bluegrass Music Association’s World of Bluegrass in Raleigh, NC. She can be heard on their album, “Ripe for the Pickin’”, released in June, 2017.

In 2008, upon completion of a three-year training program at Alexander Technique Ann Arbor under director Jane Heirich (author of Voice and the Alexander Technique), Albaugh earned Teacher Certification through the American Society for the Alexander Technique. Since then, she has done annual post-graduate training with Joan and Alex Murray in Urbana, IL. Intensive study and mentoring with students of Paul Rolland since 2011 has led to engagements teaching Rolland Pedagogy and Alexander Technique at Paul Rolland String Pedagogy Workshops at George Mason University and University of Illinois. Albaugh is also a Frisch and Denig Custom Chinrest Fitting Specialist, helping instrumentalists avoid injury through properly-fitted equipment. She has presented Alexander Technique workshops to musicians at three American String Teachers Association Conferences and will be presenting a two-hour learning lab at the March 2019 convention in Albuquerque, New Mexico. In February of 2019, Albaugh will present at Freedom to Make Music:  Alexander Technique Conference for Musicians in NYC. Other presentations to musicians include invitations to East Carolina University, UNC-Wilmington, IU-Purdue-Fort Wayne, the American Guild of Organists-Wilmington, Ashley Hall in Charleston, SC, the Wilmington Parkinson and Lewy Body Dementia Support Group, the North Carolina Suzuki Play-In in Raleigh, NC, and Miller-Motte College in Wilmington, NC. For the 2017-2018 school year, she taught in the Fine Arts Department of Pine Crest School in Boca Raton, FL. Albaugh has worked extensively with instrumentalists and singers in private and group class settings since 2008 and will be hosting her second Alexander Technique Retreat for Violinists and Violists in Fairfax, VA, in April, 2019. She is currently located in Myrtle Beach, SC, where she teaches and performs across the Southeast region.