Production of retort pouches, film-sealed trays, and other types of glued and fused structures is fraught with problems when taken to the production stage.  Often a producer of such packages relies on manual inspection, which is unpredictable, or on a variety of slow, destructive, or unreliable testing methods to reduce the number of defective seals.

The University of Illinois Packaging Laboratory has investigated nearly every method for post-production inspection, ranging from X-ray to high-frequency ultrasound. At one point thermal imaging utilizing residual heat from the sealing process was evaluated. There are now several commercial systems that take this type of approach, and while adequate for simple gross-failure detection, these are insufficient for very high-resolution detection and characterization. The problem lies with sealing heat that spreads laterally through the material and masks the temperature differential that provides a means for detection.

The confluence of several technologies such as solid state lasers, precise motion control, and thermal imaging allowed this “problem” to provide a solution. Working with a low-power laser, it is possible to heat a specific spot in the material and then measure the heat diffused to the other side using thermal imaging. The key to the problem is precise control of the heating and relative motion. The moving spot of an infrared laser heating the material will cause a “stripe” of thermal energy to emerge on the other side of the material that can be observed with a thermal imaging camera, with defects appearing long enough for detection.

Relative movement of the material past the laser will allow the system to highlight any defects, since there is no time for lateral diffusion of the material to obscure the thermal “shadow” of the defect. Evaluation of the images may be done either manually or using an image-processing algorithm, provided the interpretation is done quickly.

Extraordinarily, the method provides detection that does not destroy the material (temperature increases may be less than 10° F) and provides a better image the more quickly it is run, limited so far only by camera resolution and transport speed. While there are many parameters and limits yet to be explored, the logjam of inspection may be at least partially broken using this method. 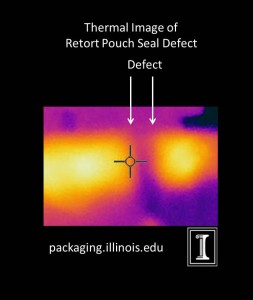 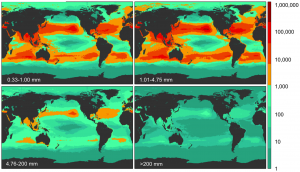 Much of tonnage of this is large (lost fishing gear etc.) but the largest number of particles are microplastics.