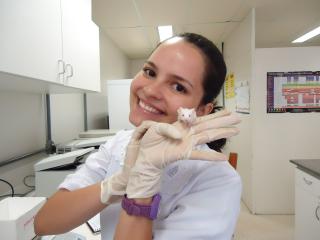 Biographical Information: Rachel was born Brasília (Brazil’s capital), but was raised in the coastal city called Fortaleza. Since kid she was drawn to science because she loved to watch scientific tv shows and animal documentaries, developing an investigative sense. During her undergrad, Rachel studied Biological Science and made an internship at Histology laboratory, working with freshwater fish. With a developing interest in reproductive disorders, Rachel started Graduate School in Brasília, where she investigated endocrine disruptors’ effects on female mice ovarian follicles. She then decided her next step would be to gain some international experience at a prestigious research institution. Rachel won a Science without Borders Scholarship to pursue her PhD working with Dr. Romana Nowak. Her favorite parts about studying in the United States are her new friends and the fast pace of research, but she also misses her family and the friendliness and warmth of Brazil. Fun Fact: Rachel studied Anthropology in France for 6 months.