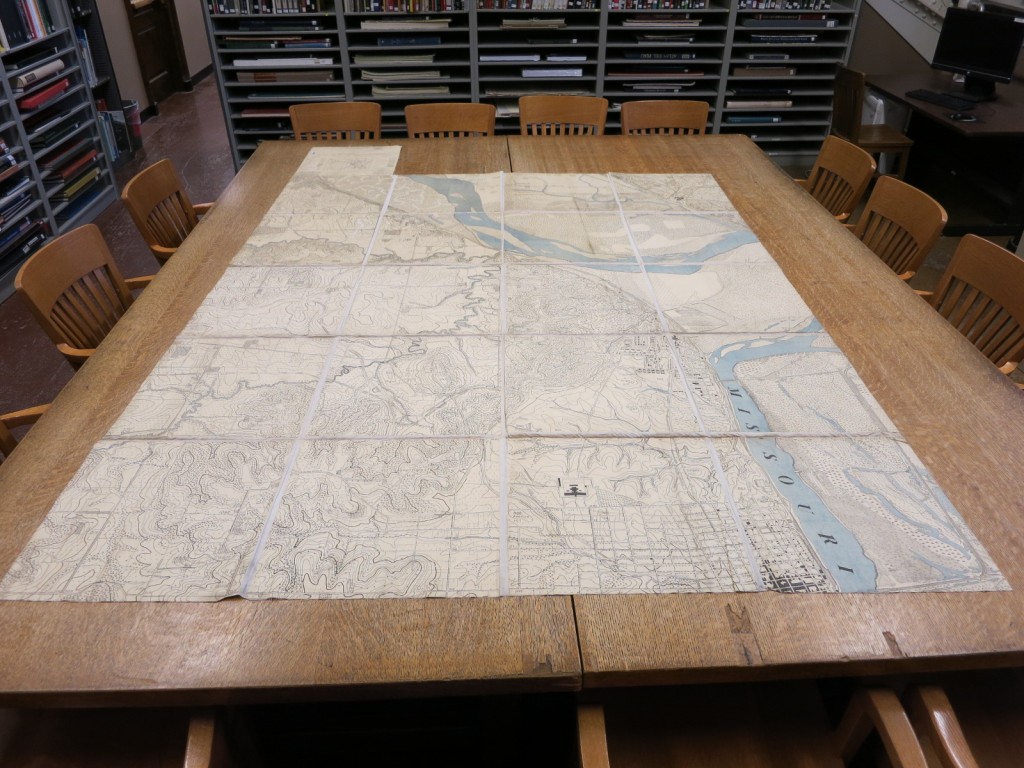 The School of Application for Infantry and Cavalry, located at Fort Leavenworth, was founded in 1881 by William Tecumseh Sherman to give graduates of West Point practical experience and additional training through a two-year course of instruction. In 1907, the School’s name changed to Army School of the Line, and the following year it was merged with other schools at Fort Leavenworth to create the Army Service Schools.

The annual report of the commandant of the Schools for its 1908 academic year discusses the need for “good maps for the war game.” During 1908 the course on “Map Maneuvers” had been greatly expanded and included both a ground- and a classroom/map-based component. War games “properly conducted [are] one of the best methods of teaching or acquiring a practical knowledge of tactics.” The lack of an appropriate map for the “Map Maneuvers” course seems to have been a stumbling point. The United States Army was dependent upon a German map created specifically for war gaming; Germany was a leader in developing this instructional technique. The writer of the 1908 report for the School of the Line calls for the War Department to create and distribute war game maps to all “posts.” The School had underway a map that was being developed by enlarging US Geological Survey topographic maps. The “map that as far as completed is superior for the purpose to any foreign map we have.” 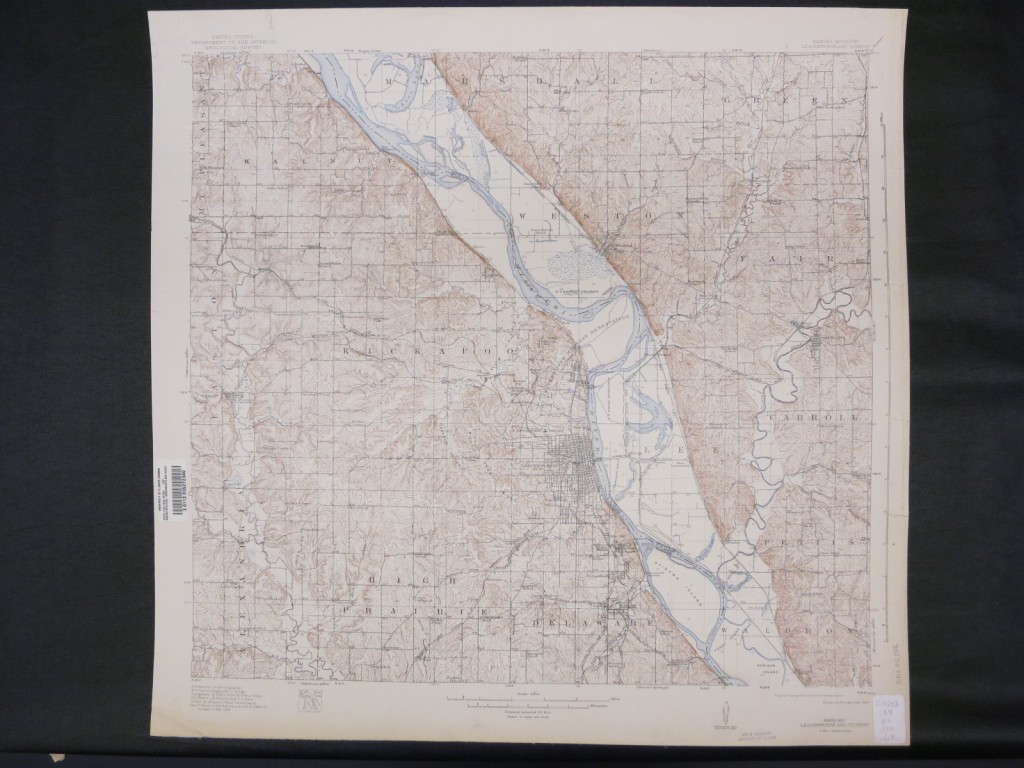 This call for a suitable, United States-produced map truly began to be answered in 1909. Two war game map projects were begun and well underway by the writing of the 1909 Army Service Schools annual report. From the section of the Department of Engineering:
“Our most important work so far has been a new war game map containing all possible desirable features for an American War Game Map. This map was based on an enlargement of the Geological Survey Map [see map above], carefully filled in with all desirable detail by Captains Conger and Fitch. Twenty sheets, 18 x 18 have so far been issued admirably printed, of a total size of 7½ x 6 miles. This map can be published at such reasonable rates that officers can procure the twenty sheets for thirty-five cents. It is the intention to keep on with this map until it reaches a size of about one hundred square miles or more. A similar map of the country in the vicinity of Gettysburg, where the country is much flatter, has been started. With these two maps available the service will be well supplied with War Game Maps. The cheapest map heretofore available has been the German War Game Map at about eighteen cents a sheet.”

The first described covers Fort Leavenworth. The twenty sheets, plus the title/legend sheet, are mounted on linen and when unfolded nearly fills our 8 x 10 foot reading room table [see map at top of page]. The only color, other than black, is blue showing rivers, streams, and ponds. 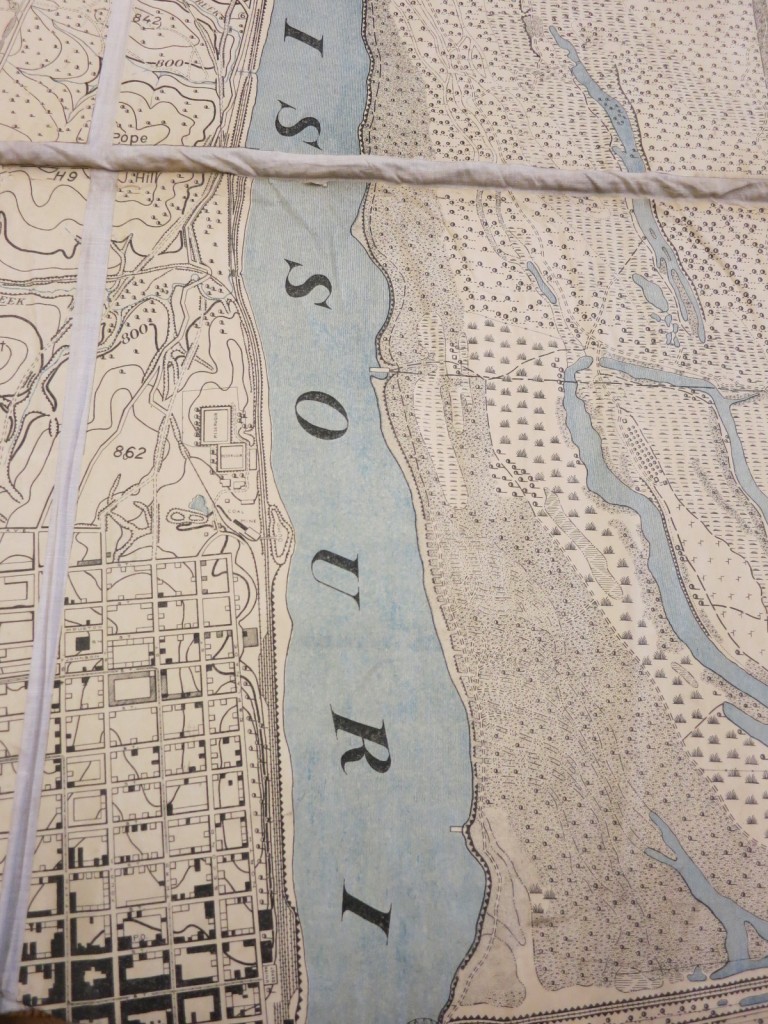 The symbol key is greatly expanded beyond the foundational US Geological Survey’s symbol set. Specific kinds of vegetation (corn, cultivate land, tress without underbrush, woods with under bush), railroads (single or double track), kinds of fences, and ground features are identified. Stone culverts appear as archways, and bridges look like bridges in profile. 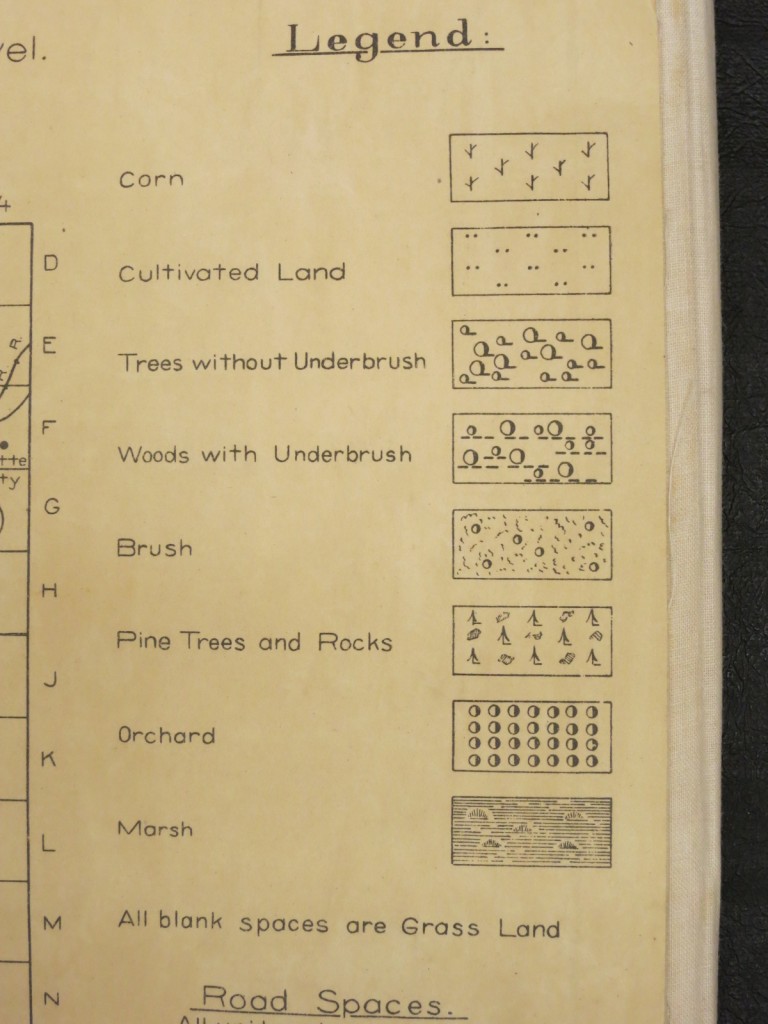 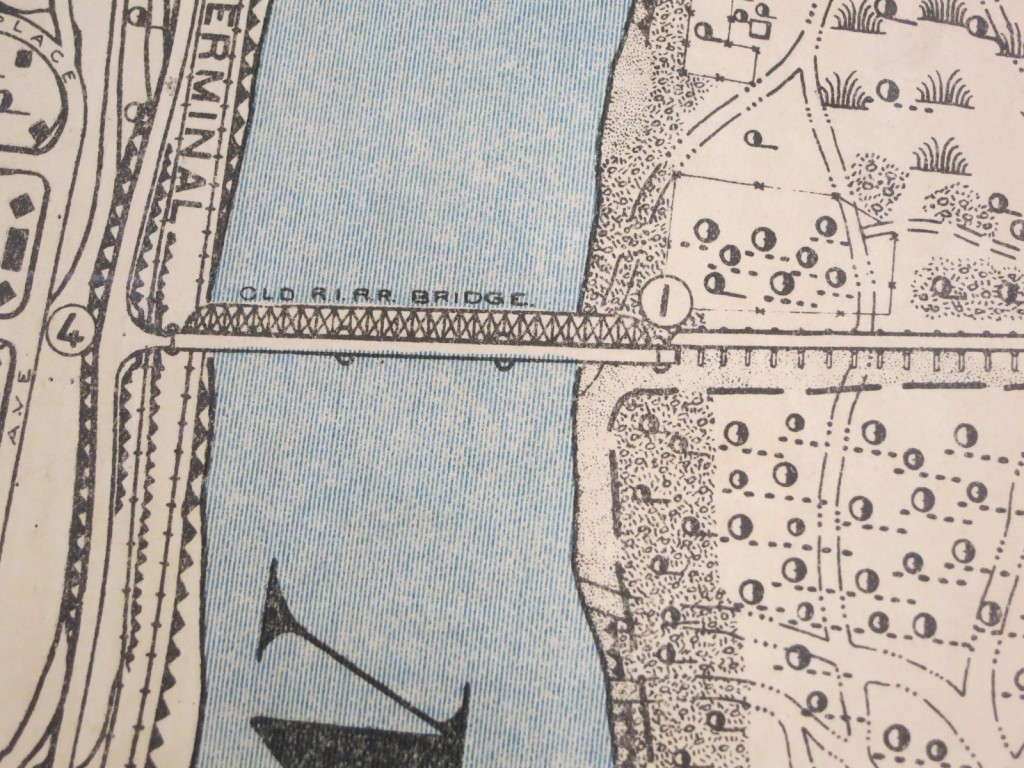 The scale statements, beyond the standard 12 inches = 1 miles, revolve around non-mechanized transport – by foot, either human or equine. 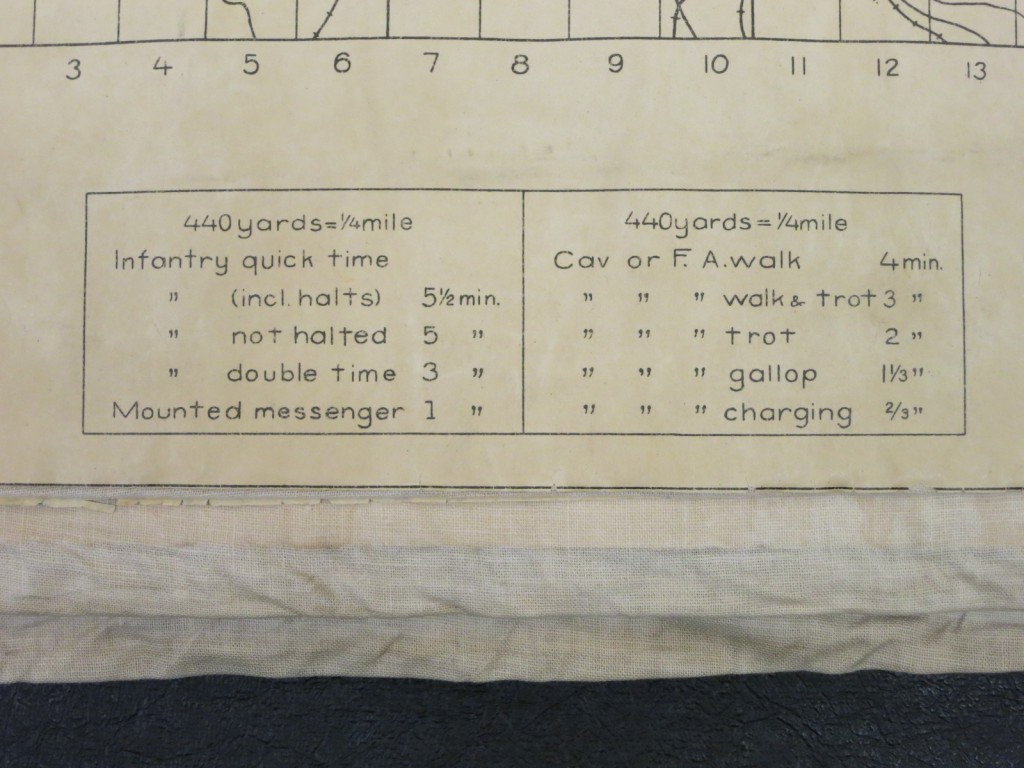 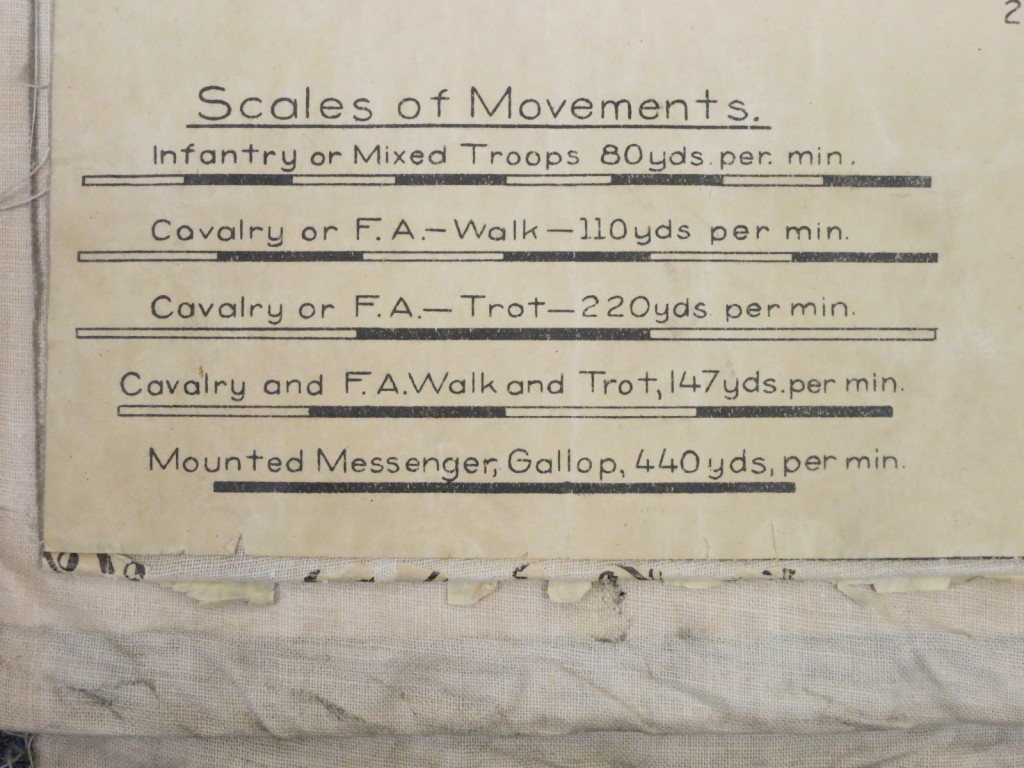 Scales were also available as separate pieces that could be laid on top of the map to calculate travel time. 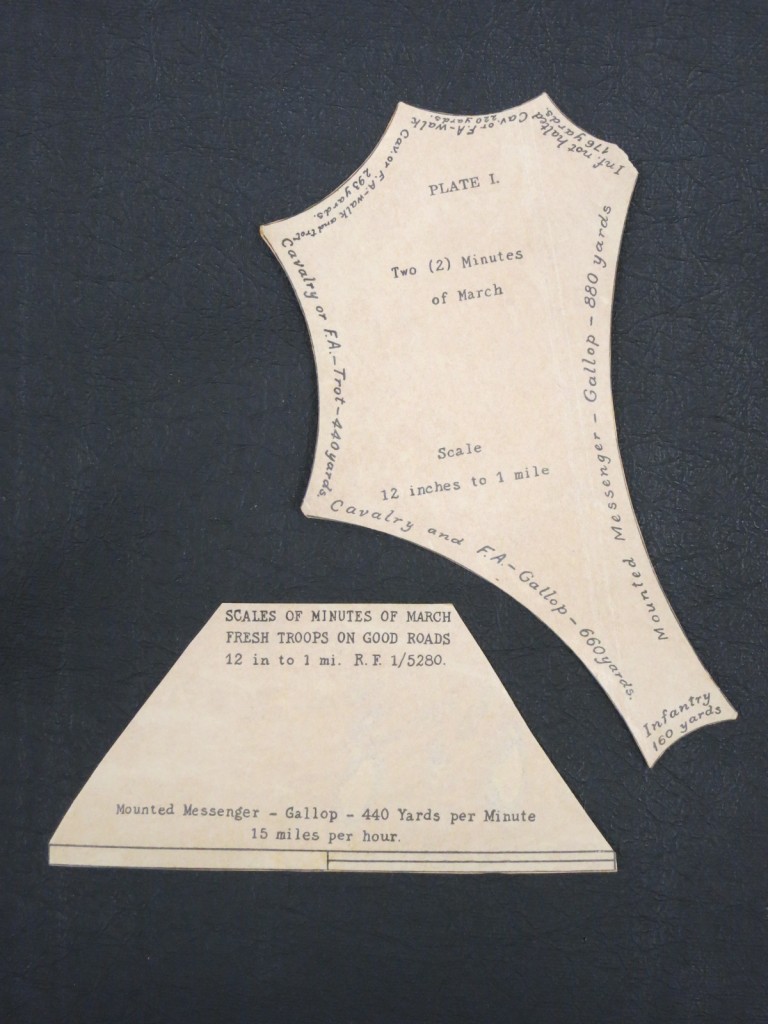 The map shows building locations as well as the names of rural land or home owners. 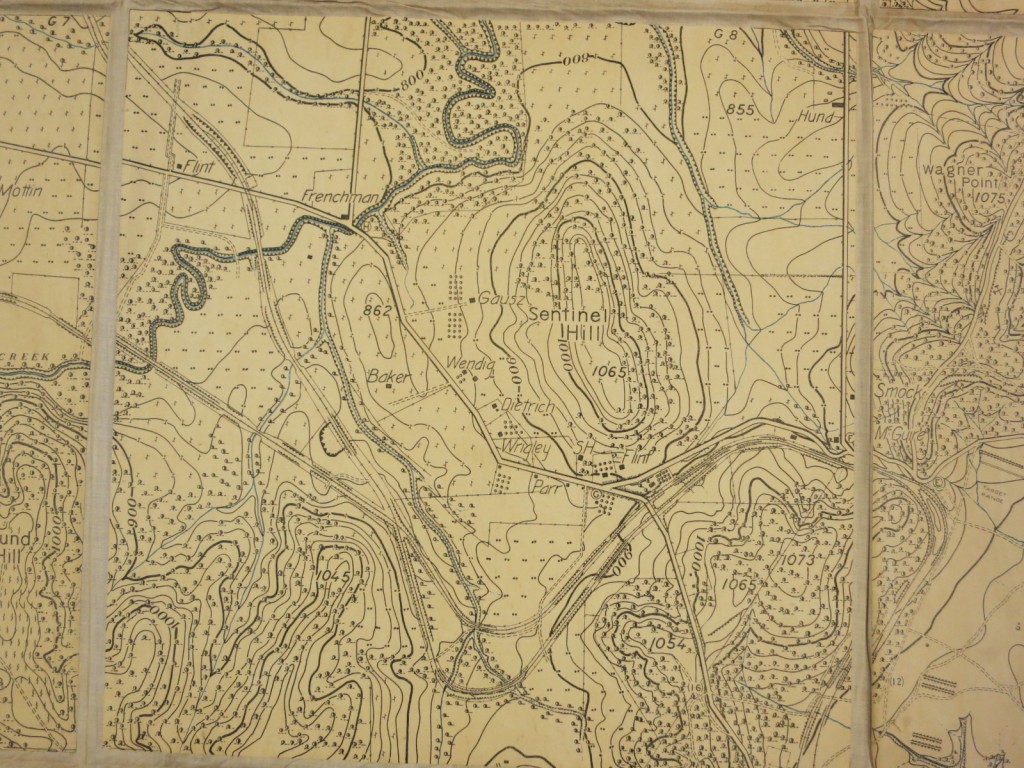 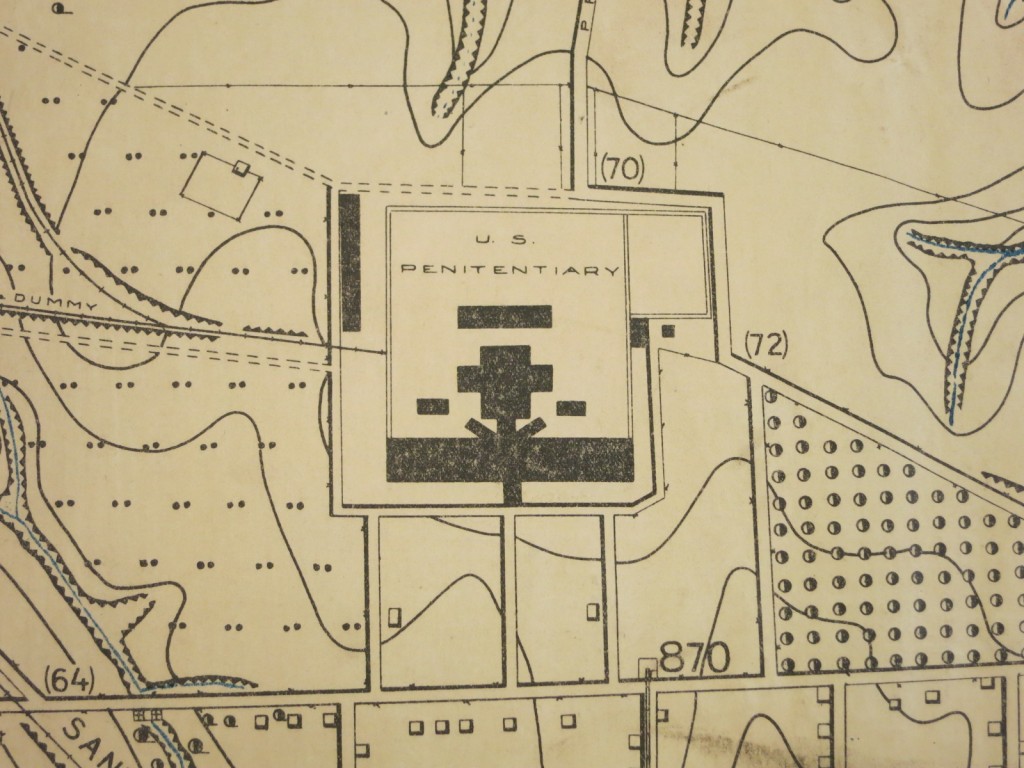 The availability of the Fort Leavenworth War Game Map was described in reports such as the annual report of the Adjutant-General of the State of New York and magazines such as The National Guard Magazine, Infantry Journal, Journal of the Military Service Institution of the United States, and Arms and the Man: The National Military and Shooting Weekly. It also appears in the new acquisitions list of the American Geographical Society’s Library. Additionally, the Army Service Schools produced pamphlets with “map maneuver” scenarios for both the Leavenworth and the Gettysburg set, and text books such as Map Maneuvers and Tactical Rides (by Farrand Sayre, a major in the U.S. Army and an instructor at the Army Service Schools) and Applied Minor Tactics (by Capt. Jas. A. Moss of the 24th U.S. Infantry) also including scenarios and instructions for running war games were published.