A new year, a new semester — a new blog!

Welcome to the Map Library at the University of Illinois at Urbana-Champaign’s new (first) blog.

We recently received a number of items that I have been showing off to anyone who came to the Map Library — things that I wanted to celebrate more widely.

So, look here for photographs of interesting, beautiful, and odd maps that are new to the collection or that have been recently discovered or used. We’ll also include updates on happenings in the Map Library.

Our current exhibit, in the hall outside of 418 Library where the Map Library is located, celebrates the centennial of the signing of the National Park Service Organic Act by Woodrow Wilson on August 25, 1916. The act created the National Park Service, within the United States Department of the Interior, to manage the United States’ national parks and monuments. In 1916, there were 37 areas under the Service’s authority; by 2016 this number has grown to well over 400 and includes areas such as national parks; national monuments; national battlefields and military parks; national seashores, lake shores, and rivers. 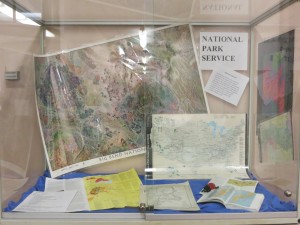