Dark Energy Survey was a 5000 deg2 optical imaging survey of the southern sky, conducted with the Blanco 4m telescope at CTIO. It probes dark energy via weak lensing, galaxy cluster counts, baryon acoustic oscillations, and Type Ia supernovae. Our group uses DES data to discover candidate “seed” and binary supermassive black holes from their variability “fingerprints” (e.g., see paper 1, 2). DES serves as a “sandbox” for us to prepare for the LSST.

The Legacy Survey of Space and Time uses a dedicated 8.4m telescope and state-of-the-art 3.2-gigapixel camera. Named the highest priority for ground-based astronomy in the 2010 Decadal Survey, LSST will produce an animated, 3D cosmic map with unprecedented depth and detail, opening a new way to study the universe. We develop novel data analysis tools for the LSST. Our group uses LSST to study the origin, growth, and ecology of supermassive black holes. 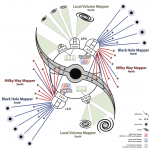 SDSS-V is conducting the first all-sky, time-domain spectroscopic survey. Starting from 2021, the SDSS-V survey is performing optical and near-infrared, multi-epoch spectroscopy for Milky Way stars and distant supermassive black holes, as well as integral field spectroscopy of the Milky Way and nearby galaxies. Our group uses SDSS-V to discover binary supermassive black holes by measuring their radial velocities – in analogy to radial velocity searches for exoplanets.

The Subaru PFS Survey will investigate the distribution of dark matter by measuring the kinematics of one million stars, perform a cosmological survey over 1400 deg2 to measure the expansion rate of the universe and density of the dark energy, and observe a million galaxies to create a census of early galaxies up to the epoch of star and galaxy formation. Our group uses PFS to study galaxy and black hole formation and evolution in the early universe. 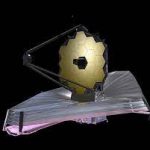 The James Webb Space Telescope complements and extends the discoveries of Hubble, with longer wavelength coverage and greatly improved sensitivity. Webb can look much closer to the beginning of time and hunt for the unobserved formation of the first galaxies, as well as look inside dust clouds where stars and planetary systems are forming today. Our group uses Webb to peek into merging supermassive black holes at much earlier cosmic epochs than ever seen before, and particularly in the “cosmic noon”, when mergers were much more prevalent than they are in the present day universe. 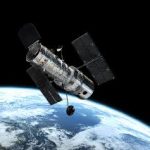 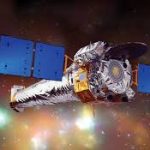 As the world’s most powerful X-ray telescope, the Chandra X-ray Observatory has eight-times greater resolution and is able to detect sources more than 20-times fainter than any previous counterpart. We use Chandra to observe the hot X-ray corona gas in the immediate vicinity of dual supermassive black holes to understand the physics of their accretion processes. 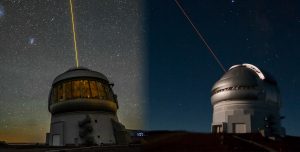 The Gemini Observatory consists of twin 8.1-meter diameter optical/infrared telescopes located on two of the best observing sites on the planet. Gemini’s suite of capabilities complements current space-based telescopes and the LSST. We use Gemini to conduct imaging and spectroscopic observations of distant galaxies and supermassive black holes to reveal their physical properties. 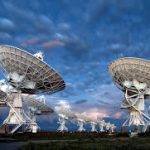 The Very Large Array is the most versatile, widely-used radio telescope in the world. We use VLA to discover and characterize dual and triple supermassive black holes via their radio emission. VLA’s high resolution and high sensitivity in the radio allow us to discover black holes that are hidden behind gas and dust, such as the triple merger system in the first known triple Type 2 Seyfert galactic nucleus SDSS J0849+1114. 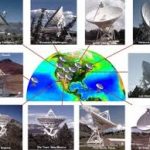 The Very Long Baseline Array is a network of ten observing stations located across the United States. It is one of the world’s most powerful radio cameras. VLBA can peer through dense clouds of gas and dust such as those surrounding supermassive black holes. High precision observations are its greatest strength. We use VLBA’s unmatched pinpoint accuracy to uncover binary and dual supermassive black holes in distant quasars. 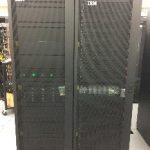 Our group leverages supercomputing resources available at the NCSA, such as the Hardware-Accelerated Learning cluster at the Innovative Systems Lab. HAL is a 16-node IBM POWER9 cluster with NVIDIA V100 GPUs. We also work with undergraduate students across the Illinois campus on computationally intensive projects through NCSA’s Students Pushing Innovation program. 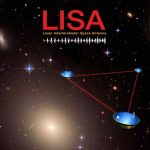 Laser Interferometer Space Antenna will be the first dedicated space-based gravitational wave experiment. LISA will discover parts of the universe that are otherwise invisible, including black holes, the Big Bang, and other, as yet unknown, objects. It will revolutionize our knowledge about the universe. We will use LISA to study intermediate mass black holes in the early universe and the origin and growth of supermassive black holes. We are a member of the NASA LISA Study Team.