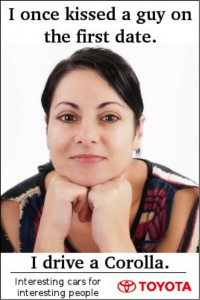 Want a sweet date? Get Corolla!

While I was doing my research online, an interesting TOYOTA image advertisement caught my attention. The only image in the advertisement is a white female who is about twenty-five to thirty years old. The image only shows her face and her shoulder. It seems like she is sitting and putting her arms on a desk while her hands are holding her face. Her face expression shows that she enjoys taking this photo because she is smiling gently. There are two messages with big and bold letters around her image saying “I once kissed a guy on the first date” and “I drive a Corolla.” There is also a message with smaller letters at the left bottom corner saying “Interesting cars for interesting people” and a TOYOTA logo on the right bottom corner.

The thesis of this car advertisement is that TOYOTA is trying to promote people to buy their Corolla because it is a nice and interesting car. The support of the thesis would be the text and the image showed in the advertisement. “I once kissed a guy on the first date” shows that the woman is brave and decisive. She is the type of person who is not afraid to take the risk to grip what he/she wants. Now she drives a Corolla. Similar to her date, she takes a risk now to try Corolla. By looking at the woman’s face expression, we can tell she is satisfied about what she gets – her date and Corolla. Her smile indirectly proves TOYOTA’s claim. The woman is not regretting buying a Corolla, and you will not regret if you get one as well. By saying “Interesting cars for interesting people”, TOYOTA categorizes Corolla as interesting and special cars. If you own a Corolla, you are fashionable, special, and you have a good taste. So why not get one?

The warrants of this advertisement would be spirit of adventure and fun. The warrants are not directly stated in the advertisement. However, since TOYOTA believes that kissing a guy on the first date is a good try, we can imply that TOYOTA believes their consumers like to take risks to experience new products as well. Customers are excited to try exciting stuff and have fun. TOYOTA also assumes that people like to be considered interesting and special. If majority of the population just want to be “normal” not “interesting”, then the text “Interesting cars for interesting people” will be pointless. TOYOTA is selling a typical adventurous life style.

The qualifier of this advertisement can be an issue. This advertisement gives people a sense that this car is only for those people who like to take a risk. However, from our common knowledge, we know TOYOTA is a famous Japanese brand and is well know for its good product quality. For those of people who do not know much about TOYOTA, about Corolla, this advertisement could be misleading. Some potential customers may be scared away just by reading this advertisement. On the other hand, the image of the woman enlarges the range of potential consumers. The woman in the advertisement is pretty, but not as sexy as many other female images we see from other advertisements today. Comparing to other super models, this woman is a “normal” person, just like you and me. It is trying to promote an idea that Corolla can be for anyone.

More and more advertisements today start to use the idea of sex to attract people’s attention on their products. Does driving a car necessarily have a connection with having a date? Probably no. However, when I first read this advertisement, I felt it was so reasonable, and the message really made sense to me. Why? One may argue that because this is what is happening in the reality and this is the truth. However, did people accept the same idea twenty years ago? Fifty years ago? A hundred years ago? The idea in the advertisement itself could be a qualifier. Older people may not accept this idea at all. Even my dad has concern about “kissing a guy on the first date”, and he is just 53 years old. Thus, this advertisement is limited to target fairly young population by its own promoting idea.

Some people may not agree on taking a risk. They may value safety and their lives on the first place instead of fun while driving. One indirect rebuttal in this advertisement would be the use of a female image. Female are usually characterized as loving and caring. Female drivers often drive carefully, slowly and safely. If Corolla can satisfy her, then there should be no problem for those who do not like taking risk to try Corolla. There is not really a backing in this advertisement. However, one possible backing TOYOTA could add into this advertisement would be safety measurement. Giving statistics to show customers that their cars are safe is the most direct and efficient way to back up possible safety concerns. Customers can have fun and be safe at the same time. Adding statistics will also make this advertisement more competitive. Consumers can quickly compare Corolla to other cars and make their decisions.

People view tons of advertisements every day on newspaper, magazines and Internet, etc. It is important for people to understand the elements of an advertisement and the tricks it is using. People should beware of details and not be bamboozled.

* References will be provided under tab “Works Cited”.