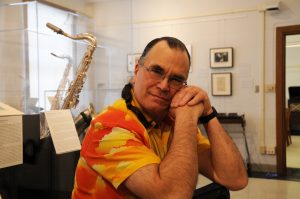 Scott Schwartz, Archivist for Music and Fine Arts and Director of the Sousa Archives and Center for American Music, has received the Edwin Franko Goldman Memorial Citation from the American Bandmasters Association (ABA).

Edwin Franko Goldman (1878-1956) was the founder, first President, and Honorary Life President of The American Bandmasters Association. In addition to honoring Goldman’s memory, the award provides recognition to those outside the membership of the American Bandmasters Association who have rendered conspicuous service in the interest of bands and band music in America.

“I am deeply honored and humbled by the nomination from my dear University Band colleagues. To be recognized by the country’s oldest and most recognized professional band organization is extraordinary. ABA’s first honorary president was John Philip Sousa whose music and papers are currently preserved by the university’s Sousa Archives and Center for American Music,” said Scott Schwartz. “It is hard to imagine that this humble archivist now shares this recognition with some of the country’s most recognized musicians, composers, educators, bandmasters, and one U.S. President.

“I was truly touched when my wife, Sarah, was able to attend the ceremony. I only wish my Palmyra-Macedon (NY) High School band and choir directors could have been there, too.”

Schwartz has been with the University Library since 2003. Prior to UIUC, he was an archivist at the Smithsonian Institution’s National Museum of American History for ten years. Schwartz’s extensive public engagement contributions include coordinating multiple efforts such as public programming, educational outreach initiatives, and exhibitions for the annual American Music Month for more than 17 years; “One Community Together” programming for more than 12 years; and “America’s History and Culture through Music” programming with local public schools for more than a decade. In 2004, he had Congress declare November American Music month in honor of John Philip Sousa’s 150th birthday celebration. His fundraising efforts have established a multitude of performance projects for the University of Illinois. In addition, Schwartz has authored numerous archival, musicological, and ethnomusicological publications and given an impressive number of presentations in these areas. His grand exhibitions include manuscripts, historical artifacts, photographs, news clippings, sound recordings, sheet music, and music instruments and have featured John Philip Sousa, Harry Partch, Samuel S. Stewart, Letritia Kandle, John Garvey, Henry Fillmore, Duke Ellington, and the four decorated Stradivari instruments from the Smithsonian that were displayed and played in 2006. Additional contributions to the profession include working on the Archives Space Project and the Archon Project: Development of a Unified Platform for Archival Description and Access at Illinois.

“The American Bandmasters Association is to be commended for recognizing the extraordinary contributions Scott has made to music, music education, and the history of bands and band instruments. Any review of the past recipients of the ABA’s Goldman Citation shows that Scott is in very distinguished company. His passion for making music and history alive for all audiences from kindergarten through senior citizens is a testimony to what a land-grant university and a research library give back to its state and its nation,” said William Maher, University Archivist at Illinois. “We thank Scott for how he fulfills the mission of the Sousa Archives and Center for American music thereby exciting interest in music and bringing honor to the University of Illinois, its Library, and its Archives.”

“The American Bandmasters Association is the most prestigious band organization in the world. The Goldman Citation is awarded to individuals who have done great service to the world of concert bands,” said Dr. Stephen G. Peterson, Director of Bands and Professor of Music at Illinois, who nominated Schwartz. “In the Harding Band Building, we are incredibly pleased and proud of Scott for receiving this award. Through his outstanding work with the Sousa Archives, he provides invaluable information to scholars from around the world. We are also very proud to count him as part of our family here at Harding and offer our most sincere congratulations.”