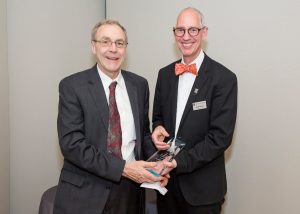 William Maher, University Archivist and Professor of Library Administration at the University of Illinois at Urbana-Champaign, is one of four faculty members honored with Campus Awards for Excellence in Faculty Leadership. Additionally, Maher has been chosen to receive the Chancellor’s Medallion this June, one of the highest honors available on campus.

The Outstanding Faculty Leadership Award is meant to recognize individuals who have provided extraordinary leadership contributions across many dimensions of shared governance that advance the excellence of a department, college, or the campus, and who exemplify the campus commitment to collaborative decision-making. It is the highest award offered for professional service that advances the mission of the University of Illinois. Recipients exhibit exemplary leadership skills and years of participation in a variety of shared governance roles. The award is sponsored by the Office of the Provost. Maher received it at the Celebration of Academic Service and Leadership Excellence this past April. This is the first time this award has come to the University Library. Past recipients have been in the Animal Sciences, and the Education Policy, Organization and Leadership fields. A full press release is available from the Illinois News Bureau.

The Chancellor’s Medallion was awarded to Maher for his contributions to the preservation and promotion of the history of the University of Illinois through his service in the University Archives. This award will be presented to Maher on June 28, 2017. The Chancellor’s Medallion has only been given 6 times since its inception, and it recognizes contributions to the campus that go beyond expectations and precedent. Others recognized this year include Maynard Brichford, University Archivist Emeritus, and Winton Solberg, Professor Emeritus of the Department of History. A full press release is available from the Illinois News Bureau.

William H. Mischo, Acting Dean of Libraries and Professor, University Library, greeted these announcements, noting, “These two awards recognize the singular contributions that Bill has made to the Library and to the campus over the course of his career.”

Maher has a long history of service and excellence at the University of Illinois. He began his archives career at Washington University in St Louis, where he earned a M.A. in History. He earned his Master of Library Science degree from the U of I after working as the Assistant University Archivist at the U of I for several years. During a one year’s leave, he was a Program Officer at the National Endowment for the Humanities. He is also past president of the Society of American Archivists and of the Midwest Archives Conference, and he is currently currently chair of the Section on University and Research Archives of the International Council on Archives. He has represented the Society of American Archivists for over years at semi-annual treaty meetings on copyright exceptions held at the World Intellectual Property Organization. His research centers around the management of university archives, the relation of archives to the notion of “historical truth,” intellectual property, and governmental information policy.