For open house, I imagine us having three separate videos similar to the one above, each focusing on different topics. The three topics would include agriculture, beaches, and rain-forests. In the videos, we would present some crucial information we learned about each topic. More importantly, we must show some of the visually appealing points of our trips to engage and attract viewers. We will use the pictures and go pro videos we took to portray our ideas. In addition to the videos, we will set up the mood of each location. This includes adding sand and wave noises to the beach as well as waterfall and bird sounds to the rain-forest. We will try to transform the setting so people feel as if they were in Puerto Rico. To help accomplish this, we will show them transition videos including the plane ride to and from Puerto Rico and the car rides between the various locations. This will make the booth feel more realistic.

In order to add an educational portion to this, we will give the participants a pre-quiz and post-quiz about Puerto Rico and Illinois. The questions will cover topics presented in the booth. I imagine that we will need an interesting set up outside the tents to attract people to the booth (as they will not be able to see the inside with the videos). This could be decorating the tent outside to look like Puerto Rico and also showing the video we used at UPR. After taking the post-quiz we will give a quick debriefing, answer any questions, and show the interviews from UPR. I anticipate this booth attracting many people as it will be unique and engaging, but also informative.

One of the goals of this trip was to compare and contrast the agriculture of Illinois and Puerto Rico. While this has been the main focus, I have noticed many other interesting differences, as well as similarities, between Illinois and Puerto Rico. While Illinois is mostly flatland, covered in either farms or urban/suburban area, anywhere you turn in Puerto Rico you see a completely different view. The variety is endless. Driving across the island, you are exposed to beaches, desserts, mountains, and rainforests. Just traveling a half hour away puts you into an entirely different universe. Everywhere you go seems like a new place, it’s hard to believe all these places are located on just one small island. We’ve spent weeks exploring beaches and waterfalls, yet there’s still so much more to see. The amount of variability and the beauty of the land is astounding. 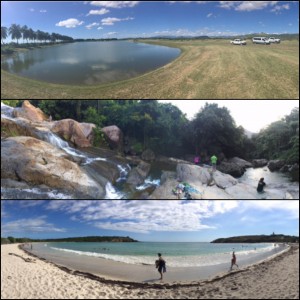 Something else special to Puerto Rico is its weather. While Illinois goes through all four seasons (one of them being an extremely cold winter!), Puerto Rico is warm year round. I was actually surprised, as I thought it would be warmer. Judging by other hot places I’ve been, such as Mexico and Arizona, I thought Puerto Rico would be similarly unbearably hot. Since its winter, the heat hasn’t been too unbearable, and it even gets chilly at night.

Because of this climate, Puerto Rico’s agriculture is very different from that of Illinois. While Illinois has mainly corn and soybean, Puerto Rico’s environment is able to accommodate a wide variety of crops. Some of their staple crops are Plantains, Bananas, Cocoa, Coffee, and Guava. However, while the climate is ideal for many of these crops, it is still not sustainable and therefore agriculture in Puerto Rico is not too prevalent and much is imported. 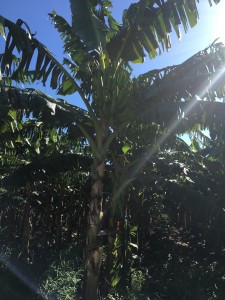 With different climates comes different agricultural methods. For example, in Illinois, we would like the increase the heat reaching crops, while in Puerto Rico this needs to be prevented. Therefore, greenhouses are built very differently in both locations. In Illinois, greenhouses consist of glass, a sight I am quite used to. However, in Puerto Rico, I was surprised to see how different greenhouses look. Rather than glass, they are built to reduce the heat and sun exposure. Most even come equipped with fans to help cool and circulate the air. Whenever I think of greenhouses, I think of glass, and of increasing heat, so this was quite a shock to me.

Something unique from our trip is that we all came from UIUC and visited UPR Mayaguez. Because of this, we were able to see the differences between the two schools, and get a feel for how college in Puerto Rico is different than back at home. I was lucky enough to actually have a long discussion with a student at UPR that was actually studying abroad from North Carolina. He said UPR was a really good school, everyone was friendly, almost everyone speaks English, and everyone was much more relaxed. He really stressed the last point. Back in the states, people are always so stressed and in a rush and we never take a second to just sit back as breathe in the fresh air and look around us and think. We never take a pause from our busy lives. He explained how relaxed everyone was and how it helped him be the same.

The trivia game also helped us learn about a lot of differences between Illinois and Puerto Rico, as well as the two schools. It was a great idea to implement that game, as it taught all of us and the students, all while providing a fun time corresponding to UPR’s laid back environment. I feel lucky to have been able to share this experience with all of my peers from UIUC, and not only enjoy a vacation, but also learn a lot about Puerto Rico and relate it back to our lives in Illinois. This was an incredibly unique and rewarding experience.

I didn’t have too many expectations going into Puerto Rico. Although it is technically part of America, I imagined it to be more so like Mexico, a place I’ve traveled to many times. From our discussions in class, I expected Puerto Rico to have common American food chains, however, it is still much more developed than I had imagined. In most places, there are a few fast food chains on every corner, similar to what I’m used to back at home. Their malls remind me of Woodfield and Hawthorne, two big malls around my home. I wouldn’t expect all of the department stores and fast food chains I’m familiar with to be so prevalent. Despite this, there are also many fast food chains common to Puerto Rico that are nowhere to be found back at home. One chain I’ve seen in almost every mall and on busy streets is El Meson. I look forward to trying this as it seems to be a Puerto Rican favorite. 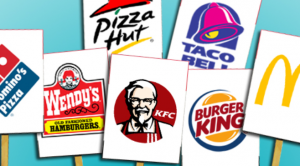 Although Puerto Rico is much more developed than expected, there are also some very underdeveloped areas. For example, the Kioskos, while great, are something unique to Puerto Rico. It’s quite uncommon in America to see small food vendors like that in my hometown anymore. Most things have developed into big chains by now. The Kioskos contributes to the different cultural feel that can’t be found from large malls and common American chains.

The traditionally Puerto Rican food found at the Kioskos made it difficult to eat there as a vegetarian. I knew being a vegetarian in Puerto Rico was not common, but I didn’t realize how odd it would be for most workers when I ordered things without meat. Although it’s uncommon, I didn’t realize it was almost unheard of. At most restaurants I went to, I would have to specially request something without meat. I used to get these weird looks when I told people I was vegetarian as a kid, however, this has decreased as it has become increasingly common in America. Now as I walk the streets of Puerto Rico, I am once again greeted with these confused looks. The cultural food in Puerto Rico hasn’t allowed for many vegetarian options, therefore people have never been exposed to the idea.

While it has been difficult to find vegetarian food, I have been exposed to a variety of freshly grown fruits. Because of Illinois’s climate, we are unable to produce most of these crops, however, having them in Puerto Rico was a great privilege. Because of Puerto Rico’s year round warm climate, they are able to constantly produce tropical fruits. My favorite fruit, guava, seems to be quite common here. I have also been able to eat plantains and some varieties of bananas. Due to the freshness, these fruits have all been spectacular.

While Puerto Rico is able to produce fruit, their agriculture in general has decreased a lot and therefore they are forced to import many crops that could normally be locally grown. One of the coffee production plants has to use coffee they grow along with imported coffee, as they do not have the ability to grow as much as demanded. Being able to try the high quality freshly grown coffee, I can see why it’s so important to grow crop locally and how much Puerto Rico would benefit from being able to once again grow most produce locally. In Illinois, we don’t have this privilege either, as the only staple crops are corn and soybeans.

This trip to Puerto Rico has led to many surprises and discoveries. I learned just how prevalent American food chains are to Puerto Rico. Despite this, their traditional food is still quite common, especially in Kioskos. I also realized how uncommon vegetarianism is in Puerto Rican culture. Regardless, I have been able to try many delicious locally grown fruits. What’s most surprising and concerning is the lack of agriculture found in Puerto Rico, a country that used to be thriving off agriculture alone.

My name is Priya and I am a freshman at UIUC currently in Undeclared Engineering. I am still deciding what I want my major to be, and this is partly because I have a wide variety of interests. Because of this, I will be able to provide some uniqueness to the open booth project. Having some background knowledge on all the fields of engineering, instead of in depth knowledge about ABE, I will be able to provide our team with new and interesting ideas. Being a part of this project will also give me a better understanding of what ABE has to offer and if it is something I can see myself pursuing in the future. 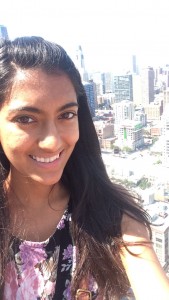