While our ABE 199 class visited Puerto Rico, we had the opportunity to meet Professor Perez, who worked with us during our study abroad trip. Professor Perez allowed us to tour the dam and irrigation canals that distribute fresh water to farms across the island, which was amazing to see. Each farmer has to send in a request for a specific amount of water. Gates in the canals are then opened to that the exact amount of water needed for each farm is distributed. Being able to see something like this was very exciting for me, since I am considering specializing in water and could definitely see myself in the future working on something similar.

After he finished showing us these canals, Professor Perez then showed us something else that I found very interesting: a large rice field. Although this might sound unimpressive, the story behind it is very important. The professor explained to us that the rice is part of a current project, which is being conducted to show that Puerto Rico would prosper by producing more crops domestically instead of importing much of its food. The project has been very successful so far, but is in danger of being cut short because of its location on this island.

The rice fields are located in a large area of land that originally contained a lagoon. Many years ago, the lagoon was drained so that farmers could use the land to produce more crops. Ever since then, it has been used heavily for agriculture, and many farmers’ entire plantations are located in the skeleton of the drained lagoon. This farmland is in jeopardy because of the Puerto Rican government’s efforts to revert more of the island back to its natural state. The proposed “33% by 2033” is exactly what it sounds like: by 2033, the government plans to have restored thirty three percent of the island back to its original form.

While this is a great idea, Professor Perez explained to us that the “33% by 2033” plan has some significant drawbacks. The government is planning on recreating the lagoon that once existed in this valley as part of its program. However, by doing this, they will be taking away a significant amount of valuable farmland that many farmers rely on. One of the benefits that the rice fields have brought to this area is improving the soil quality, which was previously very high in salinity and sodium. The soil in this area will now be able to support many more kinds of crops without needing excessive amounts of fertilizer. If the government goes through with their decision to recreate the lagoon, though, the rice fields will be completely underwater for the majority of the year, making them unusable.

The debate over the lagoon shows the island’s struggle between celebrating its past and moving forward into the future. History is very important to the island’s culture, and many traditions are proudly carried on year after year. Bringing back the lagoon would help restore the island’s original beauty. Some officials also believe that the lagoon could become a tourist attraction and bring in revenue. While reverting the island back is very appealing to many, others argue that it is preventing the island from moving forward and prospering. Agriculture is one of the most promising fields in Puerto Rico, with plenty of potential to bring great benefits and profit to the island. The rice project that Professor Perez was explaining to us is just one great example of how new technology and innovations in agriculture could have awesome results. If the lagoon is restored, however, many acres of valuable farmland could be forever lost. Also, it’s possible that the lagoon may not be successful as a tourist attraction, especially because weather patterns on the island would mean that it was only present for a portion of the year. The lagoon would change in size with the rainfall, shrinking, growing, and even disappearing for periods of time.

This debate between the lagoon or rice fields illustrates the current state of limbo that the island of Puerto Rico is in. The people are torn between staying true to the island’s history or evolving with the times. Of course, some sort of compromise on the large scale picture can be reached, and it doesn’t entirely have to be one way or the other. Over the rice versus lagoon debate, however, a compromise seems unlikely. I personally agree with Professor Perez that recreating the lagoon would be a mistake. In my opinion, sacrificing valuable land just because something else was originally there seems silly, and like a waste of space, especially since agriculture on the island has shown so much potential. Even though I’m against the lagoon, I do see the benefits that restoring it would bring and understand why the governement believes that it’s the right choice. What this debate really comes down to is what each individual places more value in: history or possibility. Both have their own set of risks and rewards, and only time will tell what the fate of this area of land consists of. 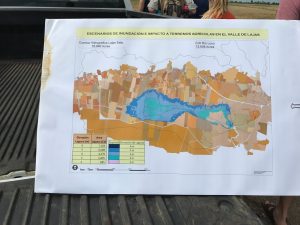 This image shows how much land the proposed lagoon would cover if the government decides to implement it.

2 thoughts on “The Great Rice Debate”