Welcome back iSchool! We hope your break was wonderful. Post your favorite moment from over Winter break. We're glad you're back. #MotivationalMondays

How are y’all doing, iSchool? It’s a cloudy, chilly Friday afternoon here in Chambana, so we are dreaming of fantastic adventures in warmer climates. As luck would have it, this week’s Pet of the Week is a fantasy creature in his own right. 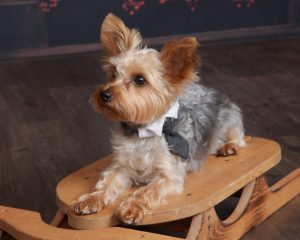 This handsome stallion is Griffin. Obviously, he’s magical, well-dressed, and the goodest boy. We’re also relatively certain he could take flight with those enchanting ears. His human, Shraddha, says he’s also sweet as sugar and a always brings the party. Pretty and a pup with personality? Griffin has put a spell on us!

Want your best friend featured and described dramatially with mixed metaphors? Send their best headshot over to the Help Desk! We’re always ready for future fluffs!