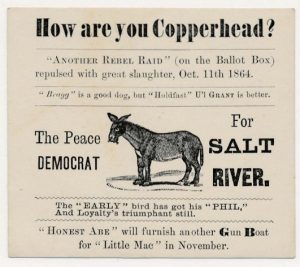 Explanation of innuendos and wordplay in 1864 Election Political Card (MS 1054):

On October 11th, 1864, state elections took place in Indiana, Philadelphia, and Ohio, resulting in victories for the Union Party. Many in the Union Party felt that the results of these elections would be an indicator of the outcome of the November presidential election.

“Bragg” is a good dog, but “Holdfast” U’l Grant is better.

Bragg refers to Braxton Bragg, a senior officer in the Confederate Army, and “Holdfast” U’l Grant refers to Ulysses Grant, General of the Union Army. Bragg and Grant were the commanding generals during the Chattanooga campaign, a series of battles in the fall of 1863 that resulted in the defeat of the last significant Confederate control of Tennessee.

The Peace Democrat for Salt River

Salt River was an expression symbolizing the path to political oblivion for defeated candidates or political parties.

“Early” refers to Lieutenant Jubal Early of the Confederate Army, who led a siege through the Shenandoah Valley to Washington, DC. He was later driven out and defeated by Major General Philip “Phil” Sheridan of the Union Army.

“Honest Abe” will furnish another Gun Boat for “Little Mac” in November.

“Honest Abe” was a nickname for Abraham Lincoln and “Little Mac” was a nickname for George B. McClellan. Gun boats were military boats used by the Union Army to travel along rivers for battle. This again implies that McClellan would be going up “Salt River,” or into political oblivion.