Abraham Lincoln’s election and re-election to the presidency of the United States took place during times of discord and animosity, with Americans at odds over slavery’s role in the states and territories. Through print and manuscript items from the Illinois History and Lincoln Collections, this digital exhibit explores Lincoln’s path from nomination to election in 1860 and his re-election in 1864, in the midst of the Civil War. It offers a glimpse into how presidential campaigns operated during the mid-19th century; while many political customs and processes have evolved over the years, parallels can still be seen in today’s elections.

James Buchanan, a Pennsylvania Democrat who believed that slavery was protected by the Constitution and should be decided by individual states and territories, was the outgoing president of the United States at the time of the 1860 election. During his presidency tensions between the north and the south were at a high, as the ongoing debate over the existence of slavery in U.S. territories became increasingly divisive. The next president would be responsible for determining the direction of the nation and the role of slavery in America’s future.

On May 18, 1860, former Representative Abraham Lincoln of Illinois received the Republican nomination for president, with Senator Hannibal Hamlin of Maine as vice president. While Lincoln was a lesser-known candidate leading up to the convention, he ultimately beat out the presumed frontrunner, Senator William Seward, who would later serve as Lincoln’s Secretary of State. The Republican Party platform condemned the slave trade and opposed the expansion of slavery into U.S. territories, but reaffirmed state sovereignty.

Between 10,000 and 12,000 people gathered for the Republican National Convention, which took place in Chicago in a temporary wooden structure constructed for the occasion, known as a wigwam (depicted below). Prior to the Civil War, it was common to refer to a temporary political headquarters as a “wigwam,” a word derived from Native American languages that refers to a shelter used for ceremonial events. 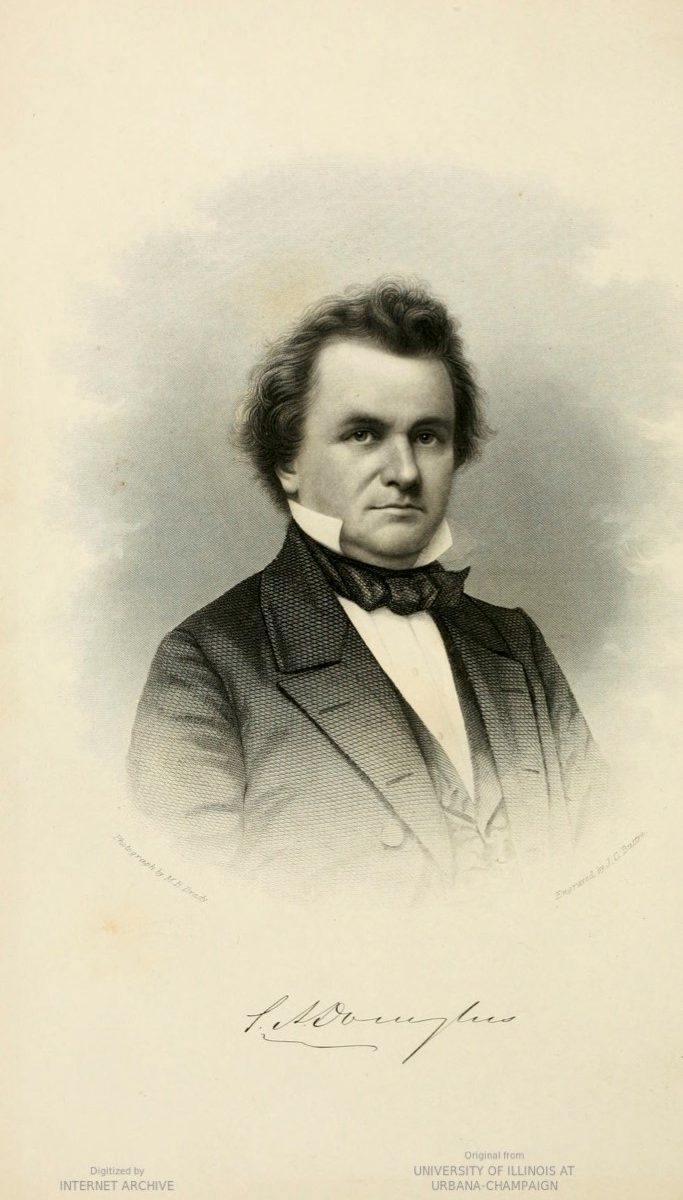 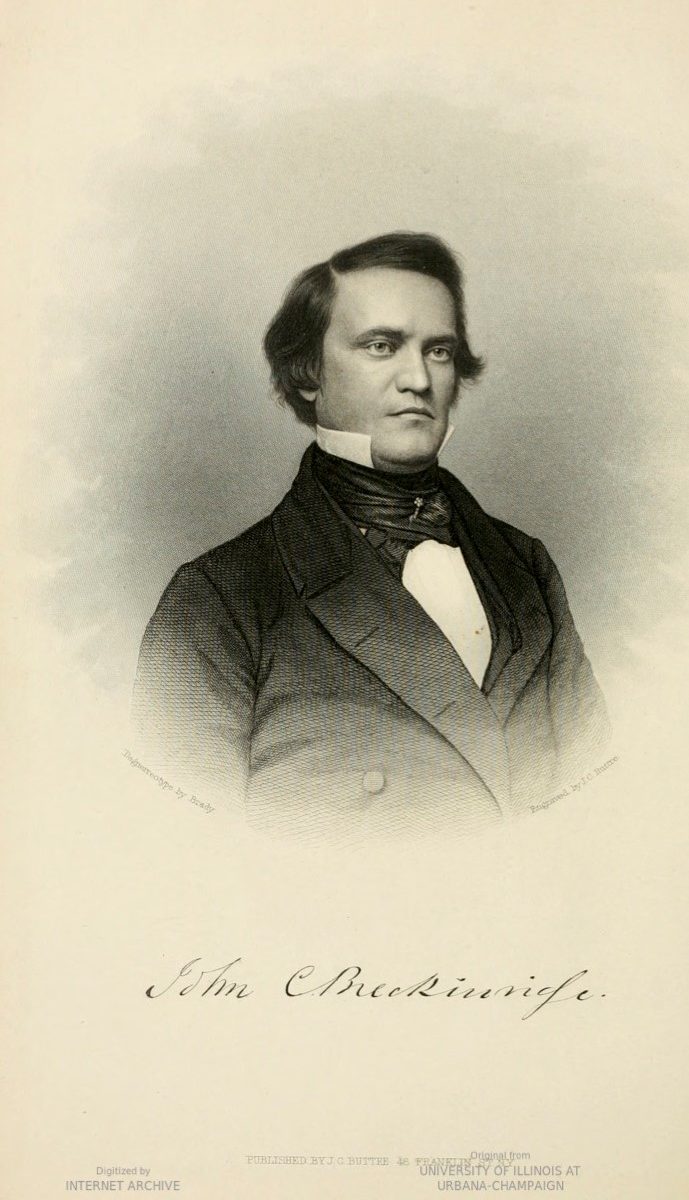 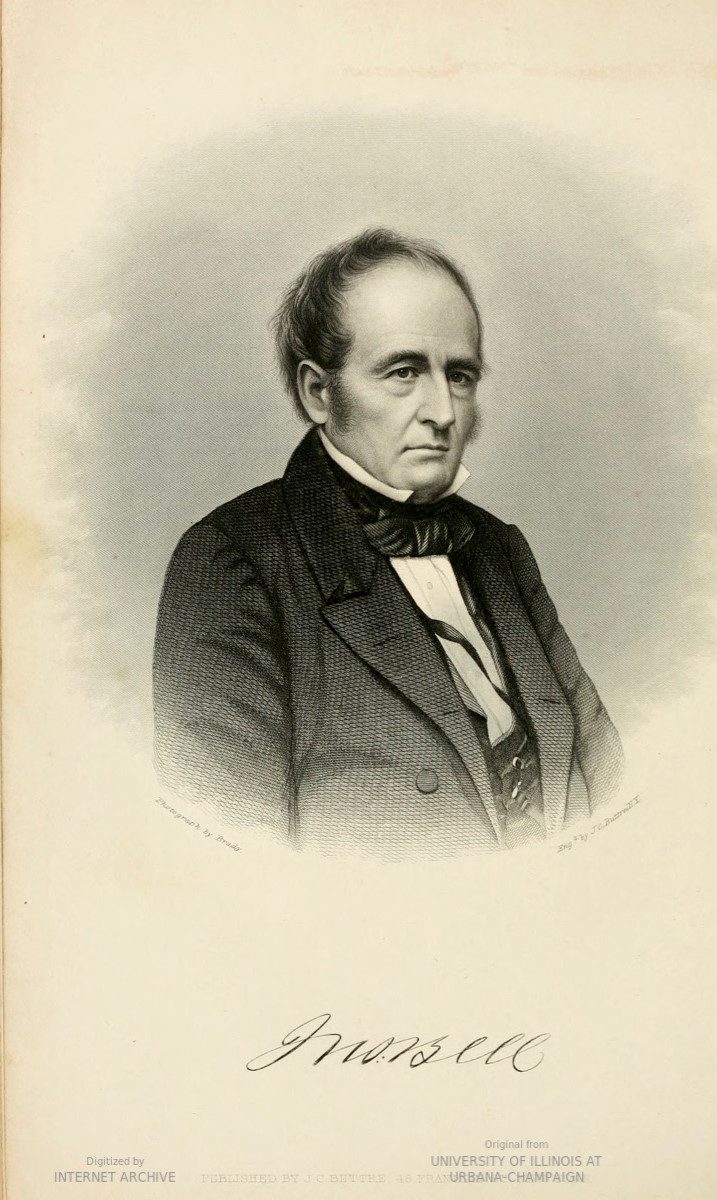 After delegates at the 1860 Democratic National Convention failed to agree on a nominee, the party’s northern and southern factions split and held separate conventions, choosing their own candidates.

The Northern Democrats selected Stephen A. Douglas, a senator from Illinois. Douglas had previously defeated Lincoln in the 1858 U.S. Senate race known for the Lincoln-Douglas debates between the two men. He believed in preserving the Union and was an advocate of popular sovereignty, wherein residents of U.S. territories would decide for themselves whether slavery would be allowed in their territory.

The Southern Democrats nominated John C. Breckinridge of Kentucky, who was the sitting vice president under James Buchanan at the time of his candidacy. Breckinridge was in favor of slavery in the states and the territories and believed in states’ right of secession.

Lincoln was criticized by his opponents for a perceived lack of political experience and his unconventional looks. However, his rise from an ordinary frontier boy to a successful lawyer and politician was a popular narrative among voters, and he became known as “the people’s candidate.” In the photo below Lincoln can be seen to the right of the door outside his home in Springfield, Illinois, during a campaign procession.

Unlike in today’s elections, political custom during this time was for presidential candidates to make few public appearances. Candidates rarely gave campaign speeches, leaving it to their party members and supporters to speak for them and rally voters.

The Wide-Awakes were one group of supporters who spread Lincoln’s message. Made up mostly of a younger generation of voters, the group’s name came from their energy, enthusiasm, and frequent torch-lit marches that took place at night. Members considered themselves keepers of order, wearing military-like uniforms and taking it upon themselves to guard the polls on election day. See the full contents of the University of Pittsburgh’s copy of the Wide-Awake Vocalist in their digital collections.

The process of casting one’s vote in 1860 looked much different than it does today. Prior to 1888, the government did not issue ballots for elections. Voters could choose to handwrite their ballot with their chosen candidates, but it was most common for the political parties themselves to print and distribute ballots for the public to take with them to cast on election day. These ballots were handed out near polling places or printed in newspapers to be clipped by voters.  It was common for ballots to be printed with color, making it easy for observers and party officials to see how people were voting.

On Tuesday, November 6, 1860, Abraham Lincoln was elected the 16th president of the United States. 81.2% of eligible voters (white men over the age of 21) voted in the election, the second highest turnout in American history.¹ Breckinridge, Douglas, and Bell split the southern vote, with Lincoln winning in all northern states. Lincoln won the plurality of the popular vote, with 40%, and the majority of the electoral vote, with 180 votes.²

While many Northerners celebrated Lincoln’s victory, others were less enthusiastic. Jacob Ruby of Hawkinstown, Virginia wrote to his friend Jacob Sheets of Vermilion, Illinois:

“I suppose your pleasure is somewhat abated since the election of Abraham Lincoln…but it is so arranged now and we will have to put up with it, another time perhaps they will think it best to keep the democratic party united…”

Sheets and his family were originally from Virginia, where most residents voted for either Breckinridge or Bell.

The air of victory for Lincoln and his supporters would be short-lived. Before the new president’s inauguration on March 4, 1861, seven southern states would declare secession from the Union and form the Confederate States of America.

The 1864 Presidential Election took place while the country was in the throes of a bloody civil war. Since 11 southern states had seceded from the Union, only 25 states fully participated in the election. Stakes were high, as the next president would determine whether the Union would continue the war and abolish slavery or negotiate an end to the war with the Confederacy.

Unlike in 1860, the Democratic Party was officially united, but it once again had two main factions with differing values. War Democrats wanted to continue fighting the Civil War until the Union was restored; Peace Democrats, also known as Copperheads, were in favor of an immediate armistice, whether by restoring the Union with slavery in place or by granting the Confederacy independence. At their 1864 convention Democrats adopted a platform that called for an immediate end to the war through negotiations with the Confederacy.

In an attempt to unite the two factions of the party, Democrats nominated George B. McClellan, a War Democrat and former General of the Union Army, to run for the presidency on their peace platform. As a general McClellan had been admired by his soldiers, and his knowledge of military strategy was well respected. However, his critics accused him of being too cautious in battle and not taking action quickly enough. McClellan and Lincoln had a contentious relationship, and Lincoln removed him from his position in November of 1862.

McClellan considered the restoration of the Union to be the country’s top priority, with little regard to the issue of slavery. Contrary to his party’s platform, he supported the continuation of the war should the Confederacy refuse reunification. These conflicting views led to an incongruous campaign.

Republicans created a new name for their party, the National Union Party, as a way to attract moderates and War Democrats who wouldn’t typically vote for the Republican Party. Lincoln was nominated along with a new vice president, War Democrat Andrew Johnson. Their platform included a constitutional amendment for the abolition of slavery and the continued pursuit of the war until the Confederates surrendered. The broadside below shows the platforms of the Union Party and the Democratic Party side by side and highlights their points of difference according to Republicans.

Early in the campaign Lincoln believed that his chances at re-election were low. He feared that large numbers of Union casualties and recent Confederate advances would sway voters against him. Both Democrats and Republicans suspected that the state elections in Indiana, Philadelphia, and Ohio, set to take place on October 11, 1864, would be an indicator of the outcome of the presidential election in November, as had been the case in 1856 and 1860.

The October elections resulted in significant wins for Republicans, and this, combined with the Union’s capture of Atlanta in September, led to a more promising outlook for Lincoln’s re-election. The political card above pokes fun at McClellan and his Copperhead supporters following the October 11 state elections. It includes innuendos and wordplays reflecting recent political and military events (click the image to learn more).

Voting from the Battlefield

The ability for soldiers to vote was a critical issue in the months leading up to the election. With the nation in the midst of war, many soldiers would be stationed outside of their home district on Election Day, leading to the first widespread instance of absentee voting in America.

Prior to the Civil War, most soldiers away from home at the time of an election were not permitted to cast a vote; but by 1864, several states had passed laws allowing white soldiers to vote in the field or vote by proxy. While Democrats hoped soldiers would be loyal to their former general, Republicans anticipated soldiers voting for Lincoln and in support of finishing the war in victory.

The forms below belonged to Thomas Halligan of Lansingburgh, New York, a private in the 104th New York Volunteer Infantry. New York allowed soldiers to vote by designating someone in their home district to cast their ballot for them, known as voting by proxy. The soldier was required to send his proxy voter his ballot along with written authorization.

The affidavit above, printed on the envelope that would have contained Halligan’s ballot, affirmed Halligan’s identity and eligibility to vote in the election.

Above, a form authorized John Tracy of Rensselaer County, New York, to cast Halligan’s vote as his proxy. Halligan signed these documents with an X mark in lieu of a signature, likely indicating that he could not read or write.

The affidavit above, completed in Lansingburgh, New York, on Election Day, affirmed the identity of John Tracy and his authorization to cast Halligan’s vote. Learn more about how the Civil War shaped absentee voting in STORIED’s “Delivering the Vote.”

Lincoln won the election by a landslide, with 55% of the popular vote and 212 electoral votes to McClellan’s 21.³ This made Lincoln the first president to win re-election since 1832. As Republicans had expected, most soldiers were loyal to Lincoln, and he received approximately 78% of soldiers’ votes. Lincoln’s re-election allowed him to see the war through to its end, with surrender by the Confederacy.