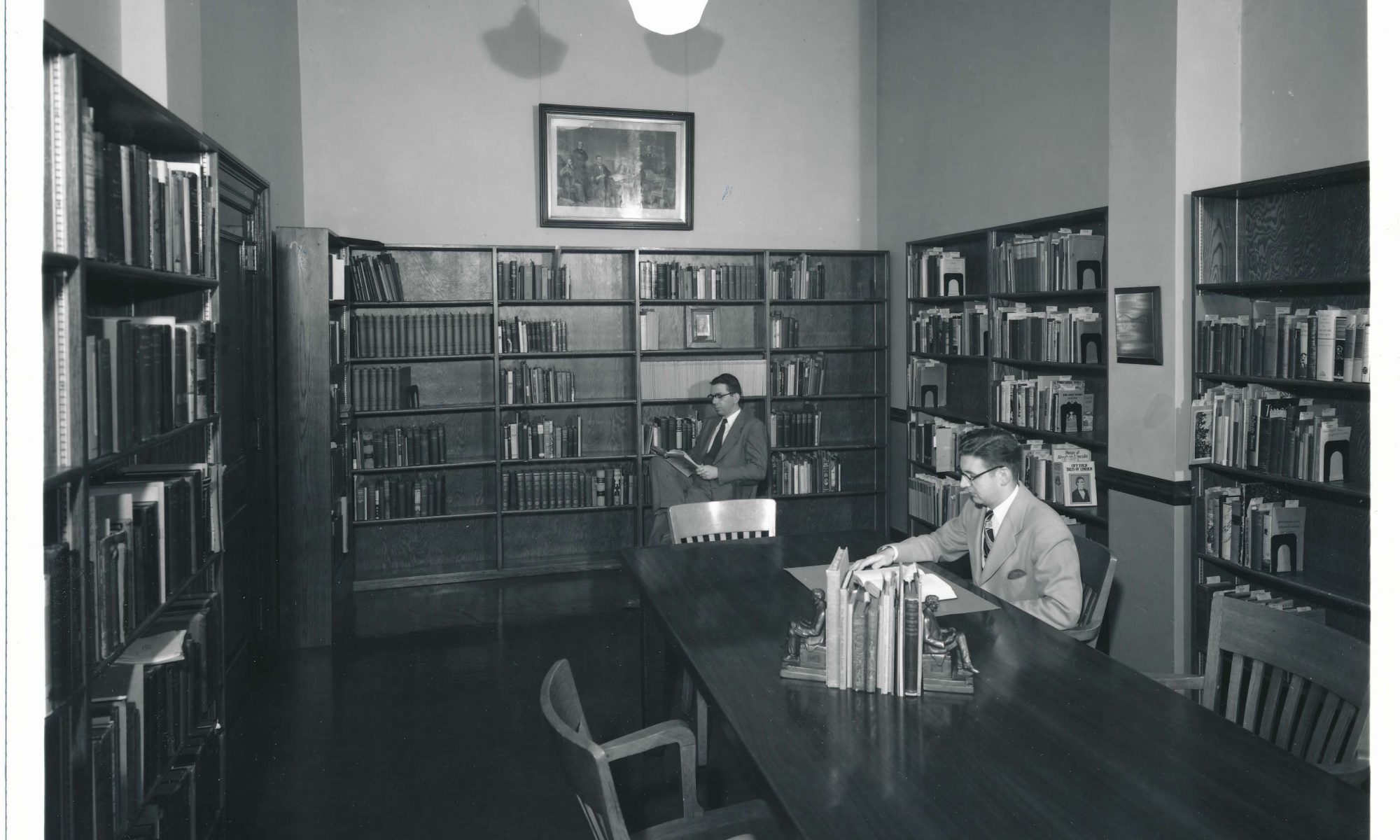 The Lincoln Room at the University of Illinois: 70 Years Since its Inception

The Lincoln Room at the University of Illinois Urbana-Champaign was established in 1951 and officially opened in 1953. Today, its collection is part of the Illinois History and Lincoln Collections, a unit of the Library’s Special Collections Division. This digital exhibit details the history of the Lincoln Room and features notable volumes acquired in the original donation.

On November 23, 1951, Harlan Hoyt Horner and Henrietta Calhoun Horner signed a deed of gift donating their personal Lincoln library to the University of Illinois at Urbana-Champaign. After years of negotiation between the Horners, University President George D. Stoddard, and Director of the Library Robert Downs, the parties agreed that the Horners’ donation would establish a “Lincoln Room” within the University’s Main Library. The Horners envisioned the future Lincoln Room as a “working library” that would be used for reference by students, faculty, and Lincoln scholars around the globe.

Both graduates of the University of Illinois Class of 1901, the Horners donated their collection in honor of the 50th anniversary of their graduation. It was their intention that the Lincoln Room would serve as a memorial to the Class of 1901. They encouraged members of their class to also contribute to the Lincoln Room, whether through donations of books or of monetary funds. Financial contributions ultimately established an endowment fund through the University Foundation.

After graduation, Harlan Horner was secretary to University of Illinois President Andrew Sloan Draper. In 1904, Draper left the University to become the first Commissioner of Education of the State of New York. Harlan went with him and in 1909, was tasked to write a biographical sketch on Lincoln in celebration of the Lincoln Centennial, which would be published for use in New York public schools. This project piqued Harlan’s interest in Lincoln, and he began researching aspects of Lincoln’s life and collecting Lincolniana (printed material about Abraham Lincoln).

At the time of his marriage to Henrietta Calhoun in March 1928, Harlan’s Lincoln library had around 300 volumes. Henrietta, a scientist, educator, and physician, was intrigued by Harlan’s collecting and quickly joined in seeking Lincoln books and pamphlets to purchase. Of their collecting, she said:

Both Harlan and Henrietta engaged in Lincoln scholarship. Harlan wrote on Lincoln’s relationship with the newspaper publisher Horace Greeley and aspects of Lincoln’s faith, while Henrietta extensively researched the lineage of Lincoln’s maternal ancestry. (IHLC recently processed a collection of Henrietta’s research on this subject, now MS 1201.)

Henrietta Calhoun Horner died in 1964 and Harlan Hoyt Horner died the following year. An endowment, secured in part by members of the Class of 1901 and from the Horner estate, continues to support the maintenance and growth of the Lincoln collection.

Acquisition and Opening of the Lincoln Room

The Horners’ personal collection of nearly 4,000 printed material formed the nucleus of the Lincoln Room, now housed in the Illinois History and Lincoln Collections (IHLC). Photographs, articles, news clippings, manuscripts, and objects were also included in the original Horner donation.

The Horners sought to collect all material published in two prominent Lincoln bibliographies, those of James Jay Monaghan and Daniel Fish. In preparation to send materials to the University, Henrietta created a detailed inventory of their library, complete with author, title, Monaghan and Fish numbers, and estimated cost of each volume. The Horner library left its home in Albany, New York, and made its way to Urbana, Illinois, via truck, where it arrived on October 22, 1952.

The original accession consisted of thirty-nine boxes; thirty-three boxes included volumes inclusively about Lincoln, while six boxes included volumes on associated people or topics, as well as books Lincoln was known to have read in editions that would have been available to him at the time. Also included in the original shipment were boxes of bronze and plaster artifacts and photographs, including a bronze Lincoln bust presented to Harlan by his associates and professional boards at the New York Department of Education on the occasion of his retirement in 1939. Today, the bust is on display in the IHLC reading room.

The Lincoln Room opened on February 12, 1953, and was formally dedicated during the University’s commencement weekend on June 20, 1953. It was located within the History and Political Science Library in Room 424 of the University’s Main Library. Leslie W. Dunlap, professor and director of the Graduate School of Library Science, maintained the collection until his departure in 1958.

Due to the rapid growth of the original collection, the Lincoln Room outgrew its original space in the History and Philosophy Library in the decades after it was established. In January 1982, the Room moved across the hall to rooms 422 and 426. A formal rededication took place on February 17, 1982, with remarks given by Lincoln scholar Mark E. Neely, Jr., director of the Louis A. Warren Lincoln Library and Museum in Fort Wayne, Indiana.

The new space allowed the Lincoln Room to continue expanding the collection and build a secure environment for its archival material. Still managed by the History Library, the Lincoln Room’s re-dedication garnered a renewed attention to the collection, leading to several notable donations and administrative focus on Lincoln-related projects, such as cataloging previously uncataloged material and creating a database for Lincoln-related articles.

“Our main concern is the future, not the founding, of the Lincoln Room.”

Today, the Lincoln Collection at IHLC has nearly 8,000 print materials about or related to Abraham Lincoln. Cataloged items include bibliographies; biographies; printed lectures, sermons, and eulogies; published speeches given by Lincoln; collected and selected writings of Lincoln, including letters, messages, proclamations, and poetry; fiction, poetry, plays, and music inspired by Lincoln’s life and legacy; memorial pamphlets from Lincoln celebrations, anniversaries, and colloquia; and facsimiles of Lincoln letters; among other items. In recent decades, IHLC has focused on acquiring more Lincoln-related manuscripts and archival collections, available for browsing here.

The Horner endowment continues to enrich the Lincoln Collection.

Finally, in commemoration of the 70th anniversary of the signing the deed of gift, we are highlighting several items  included in the original Horner donation, which established the Lincoln Room at the University of Illinois. 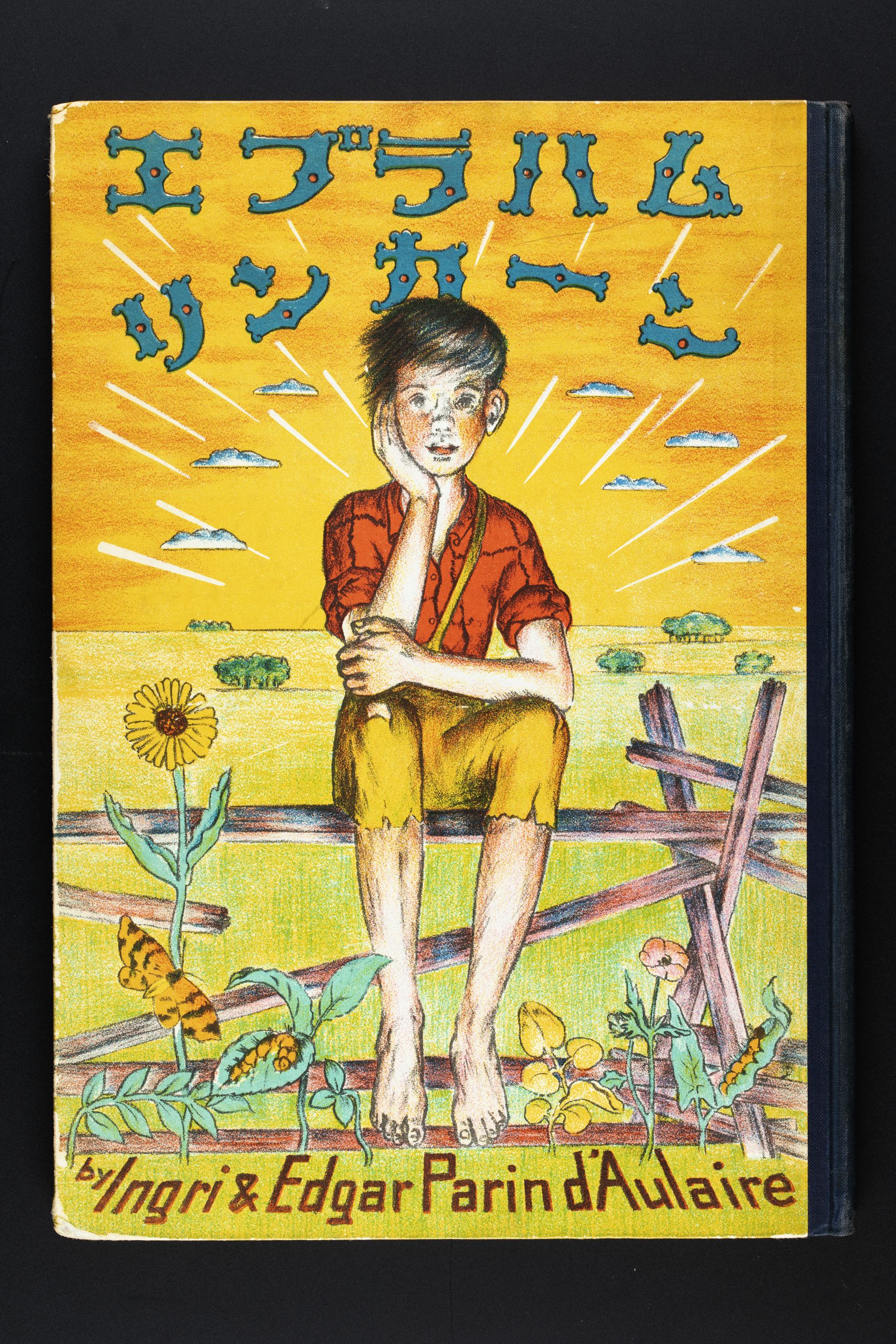 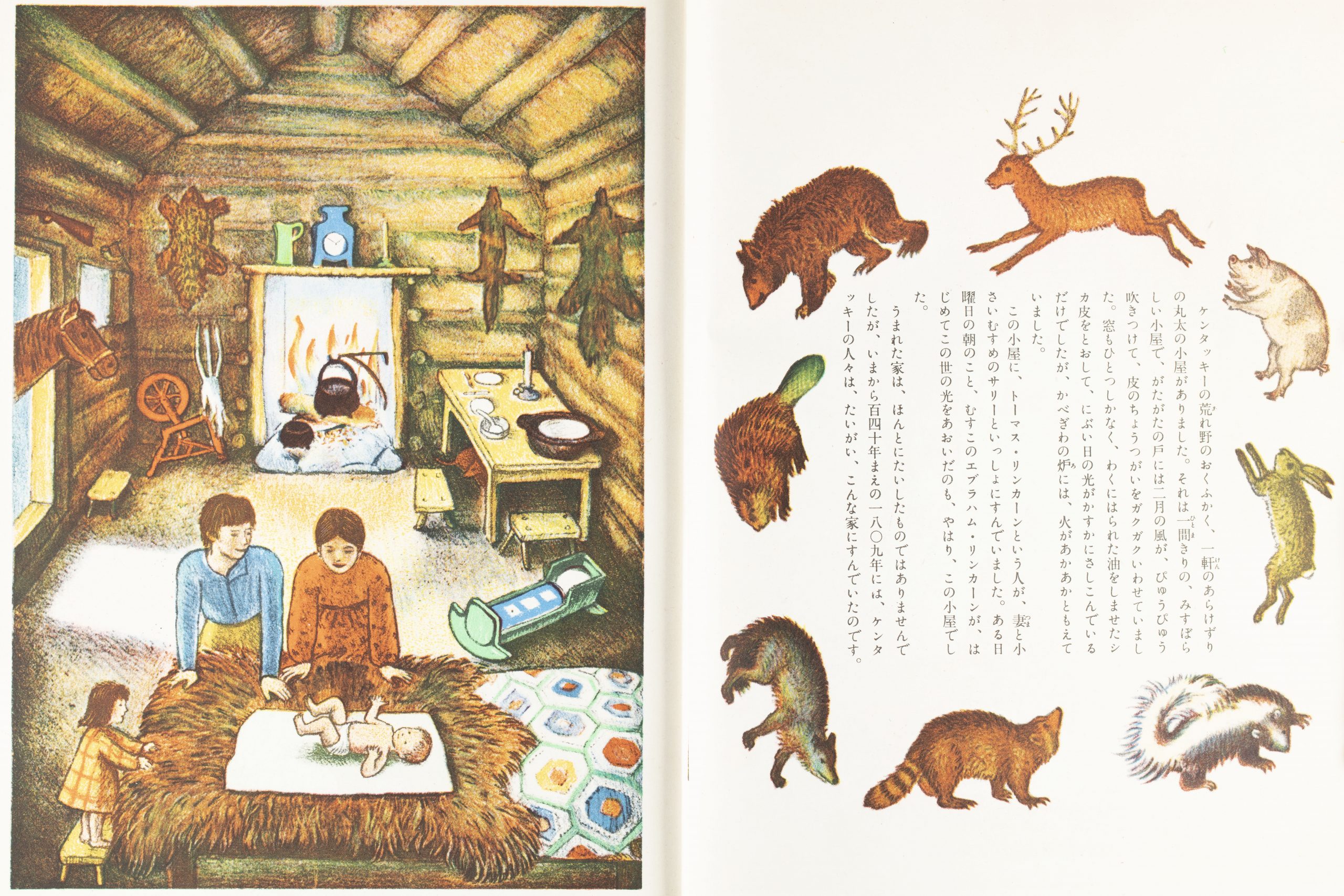 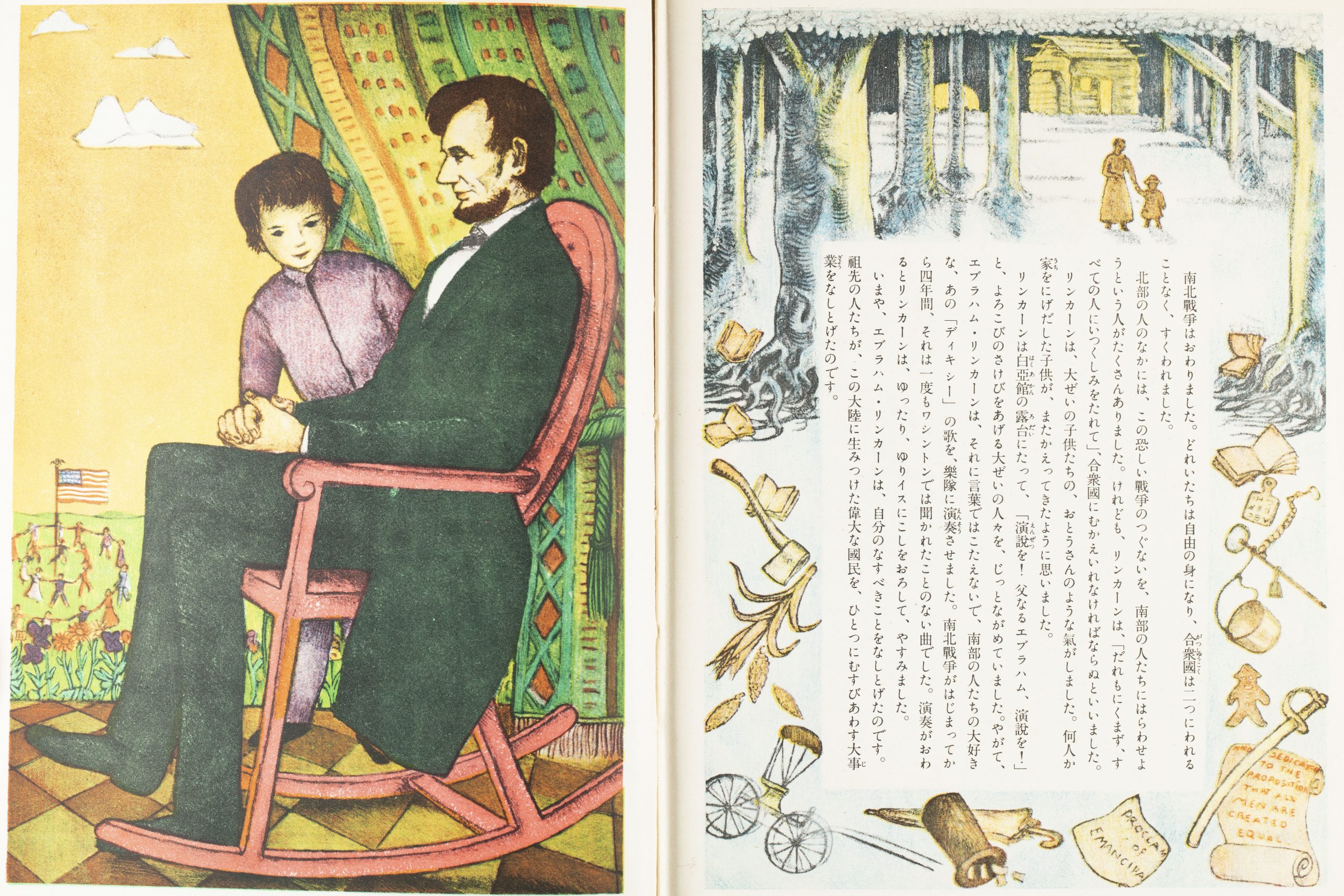 The Horners collected all books printed on Abraham Lincoln, including adult and youth literature. This children’s book is a biography of Abraham Lincoln written by Ingri and Edgar Parin d’Aulaire. Winner of the 1940 Caldecott Medal for illustration, it was translated and printed in multiple languages. This copy was published in Japan in 1950. Today, the Lincoln Collection includes over 200 books in languages other than English, representing thirty different languages. 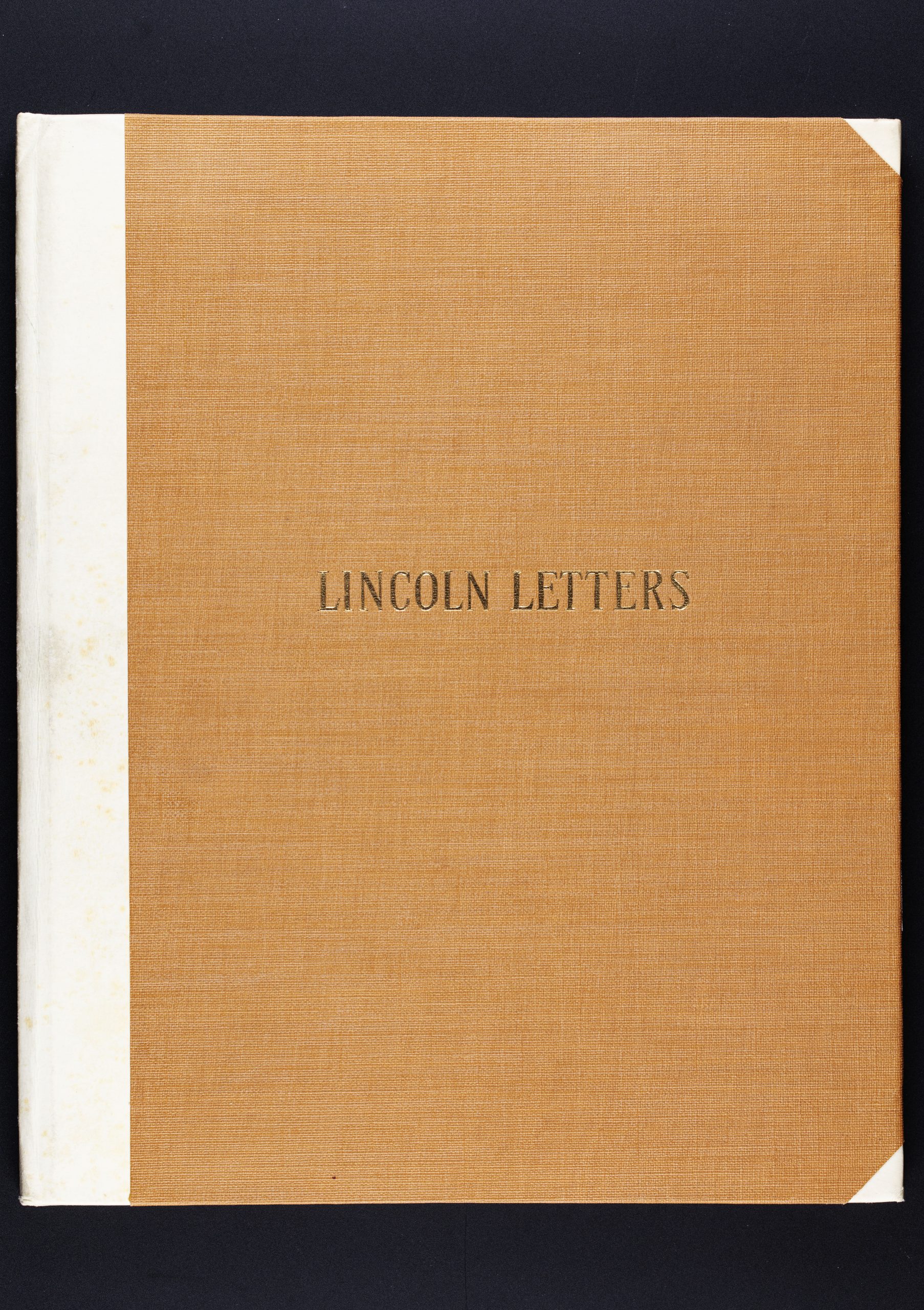 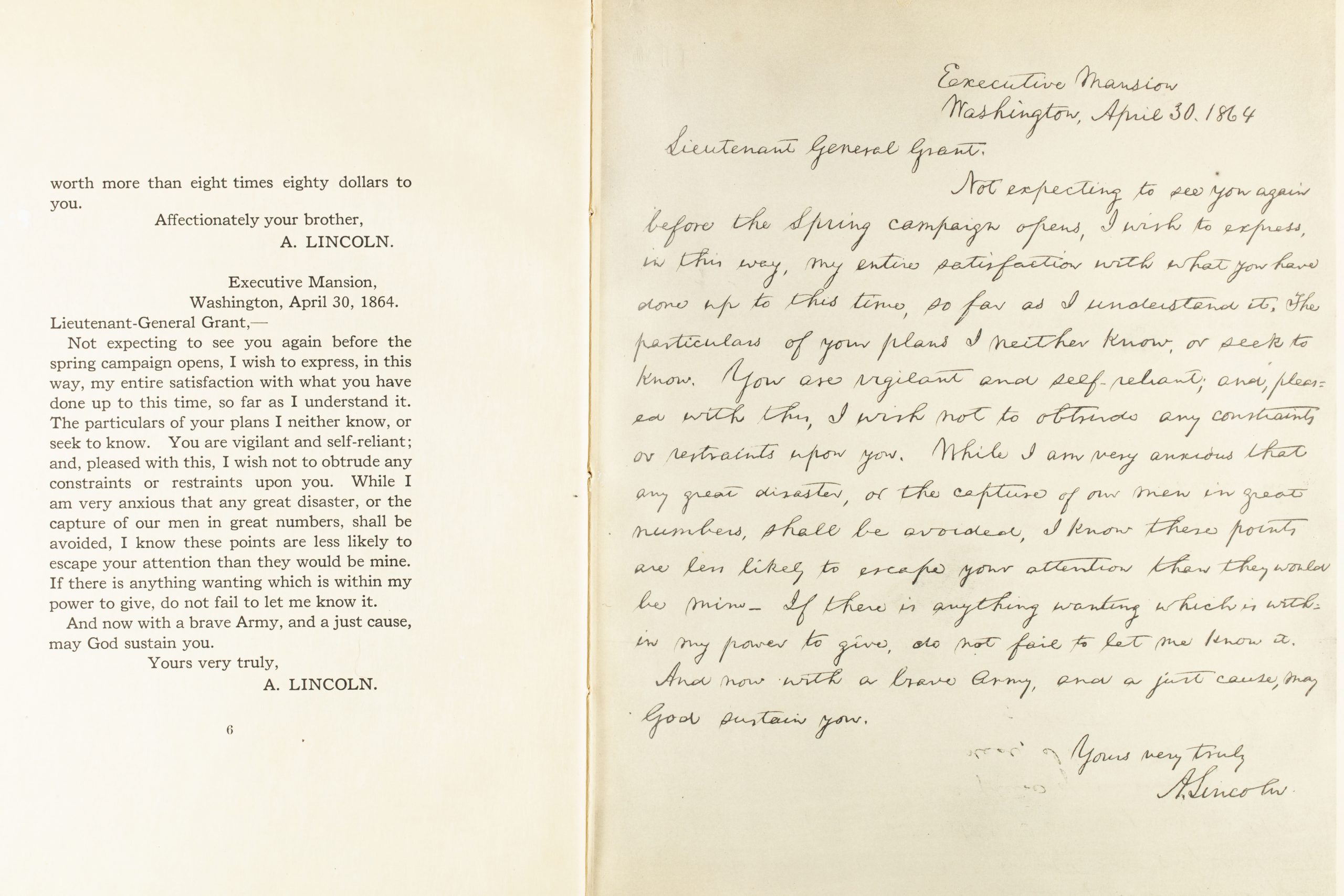 The Bibliophile Society (Boston, Massachusetts) published these Lincoln letters, held in the private collection of William Bixby, for its members in 1913. Bixby’s collection includes a letter written from Lincoln to his father and his brother, Johnston (December 24, 1848), and a letter written from Lincoln to General Grant (April 30, 1864). Also included is a facsimile of a letter from Austin A. King to Lincoln (January 27, 1864), endorsement by Lincoln on the last page. The Society noted that these letters are “so thoroughly characteristic of the man” that they’ve left the letters without interpretation. 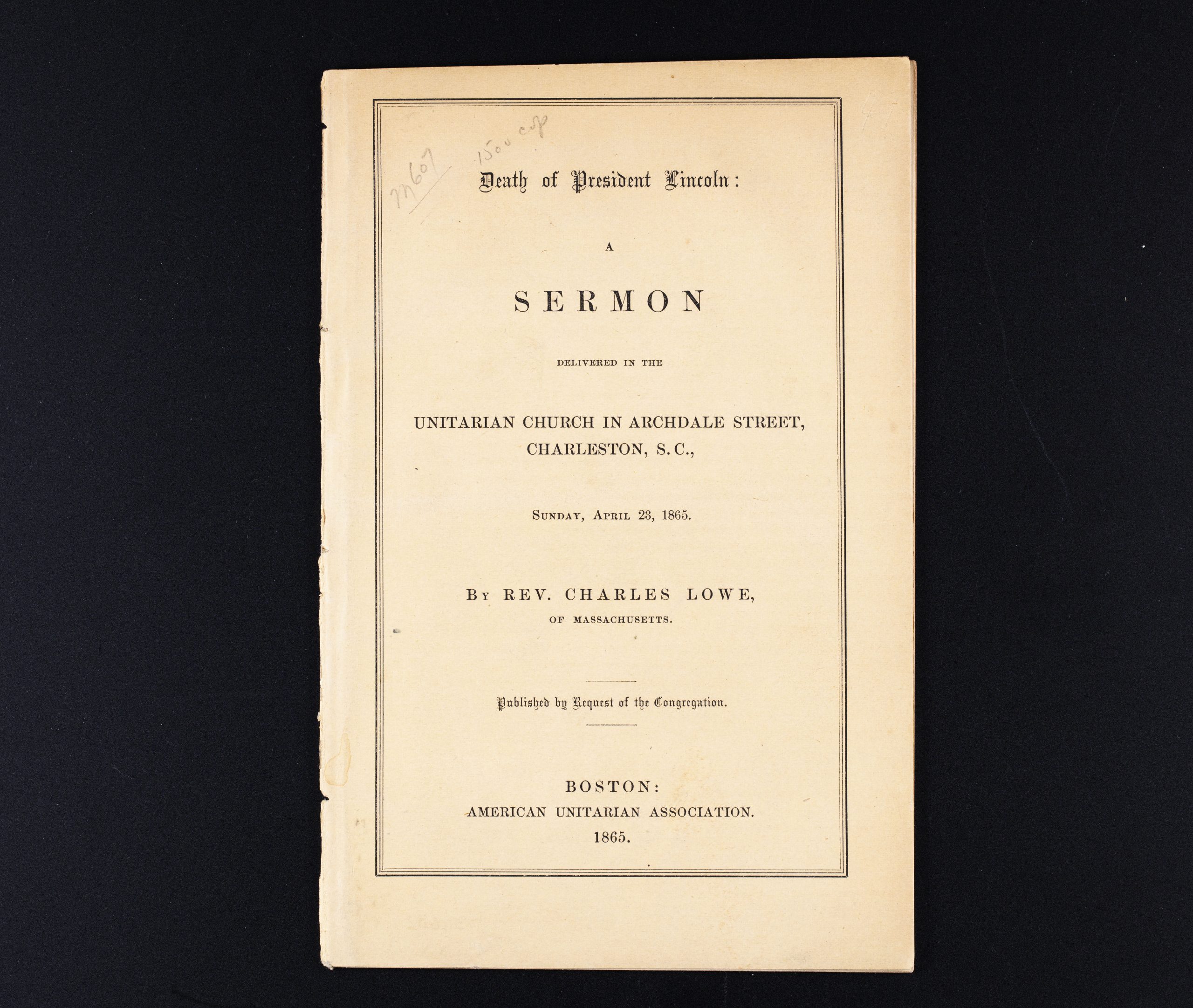 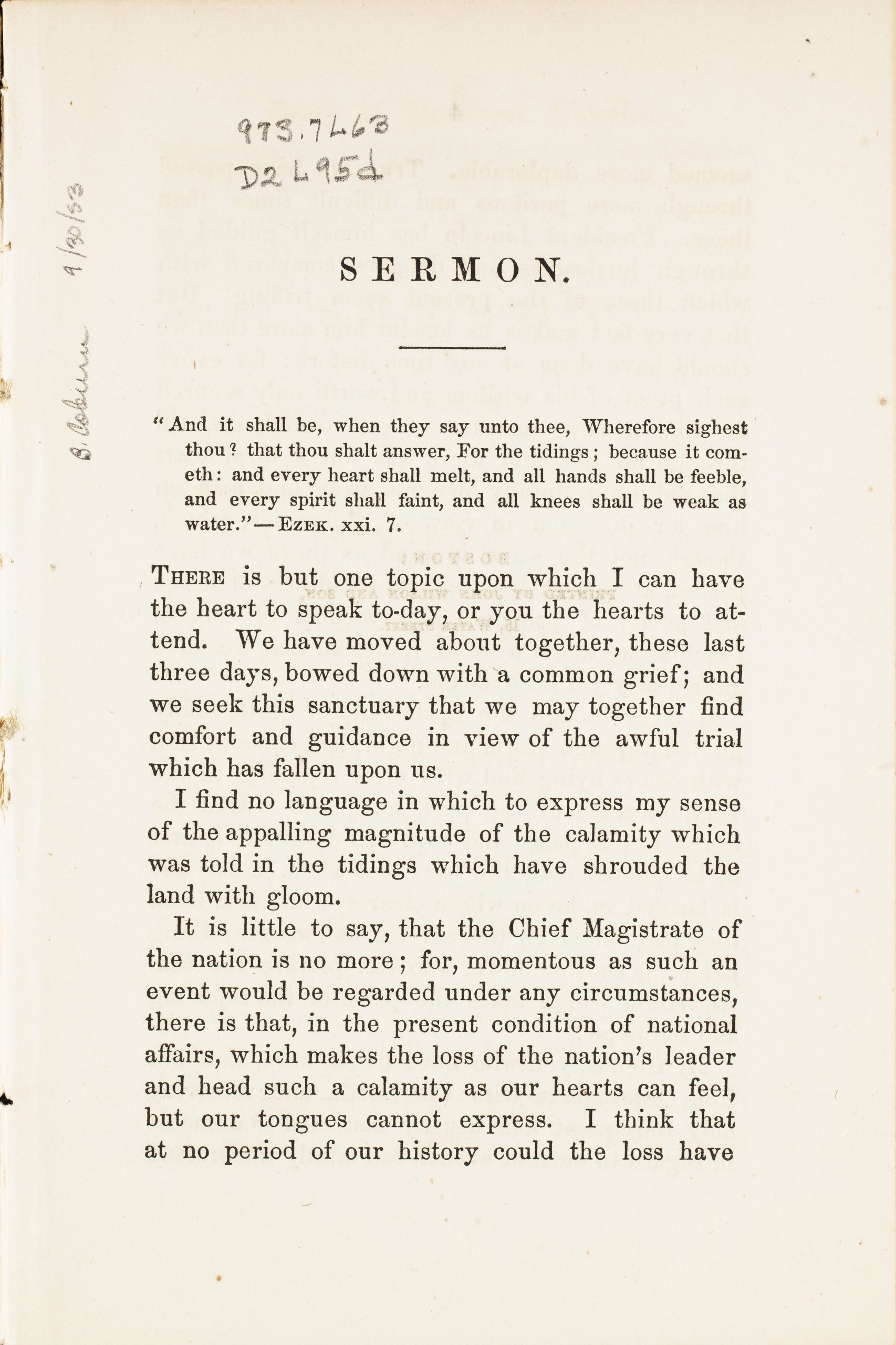 The Lincoln Collection has nearly 200 sermons, discourses, and eulogies given and published soon after the death of Abraham Lincoln in April 1865. This sermon was delivered eight days after Lincoln’s death by Rev. Charles Lowe of Massachusetts to the congregation at the Unitarian Church in Charleston, South Carolina. 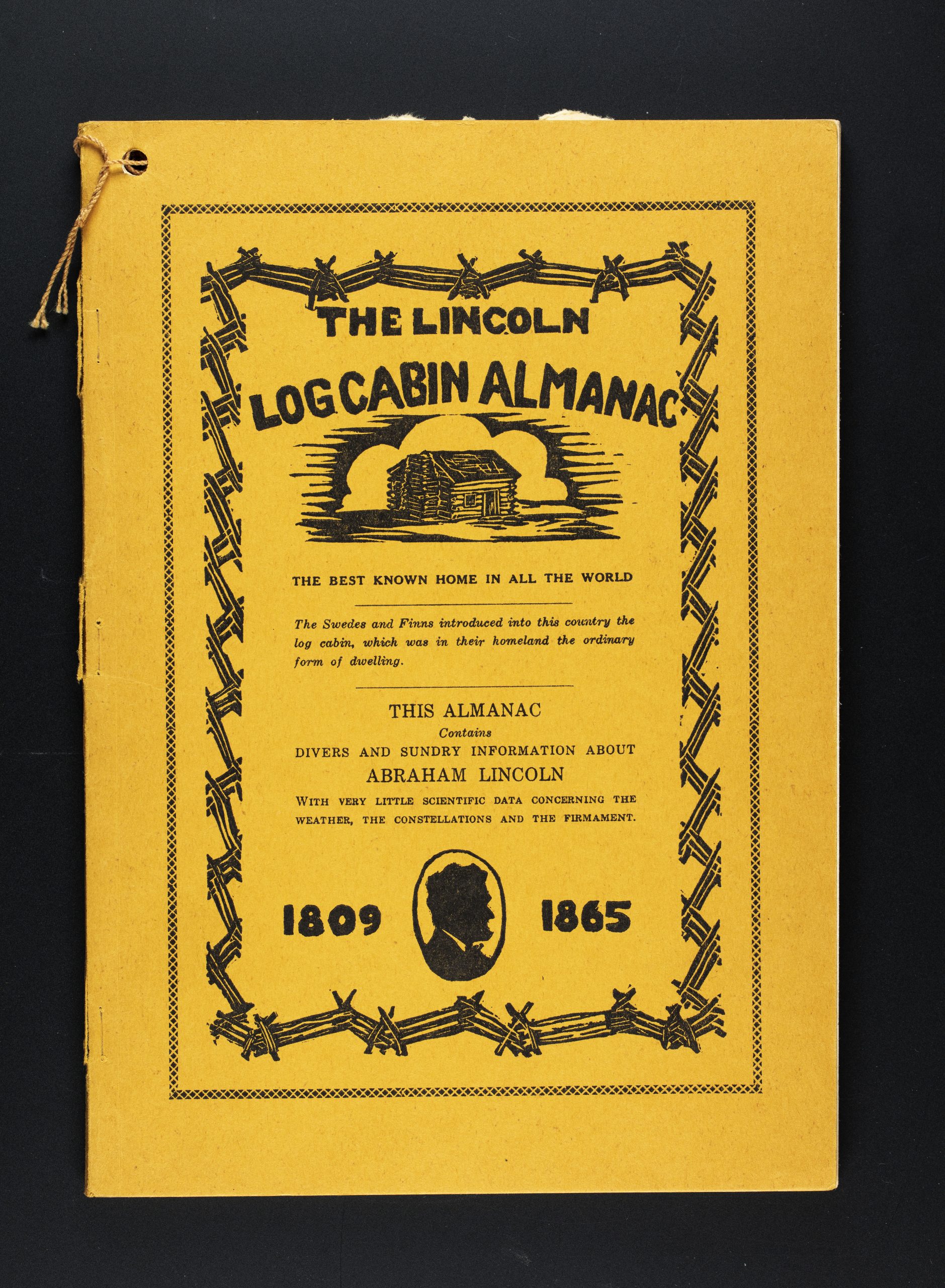 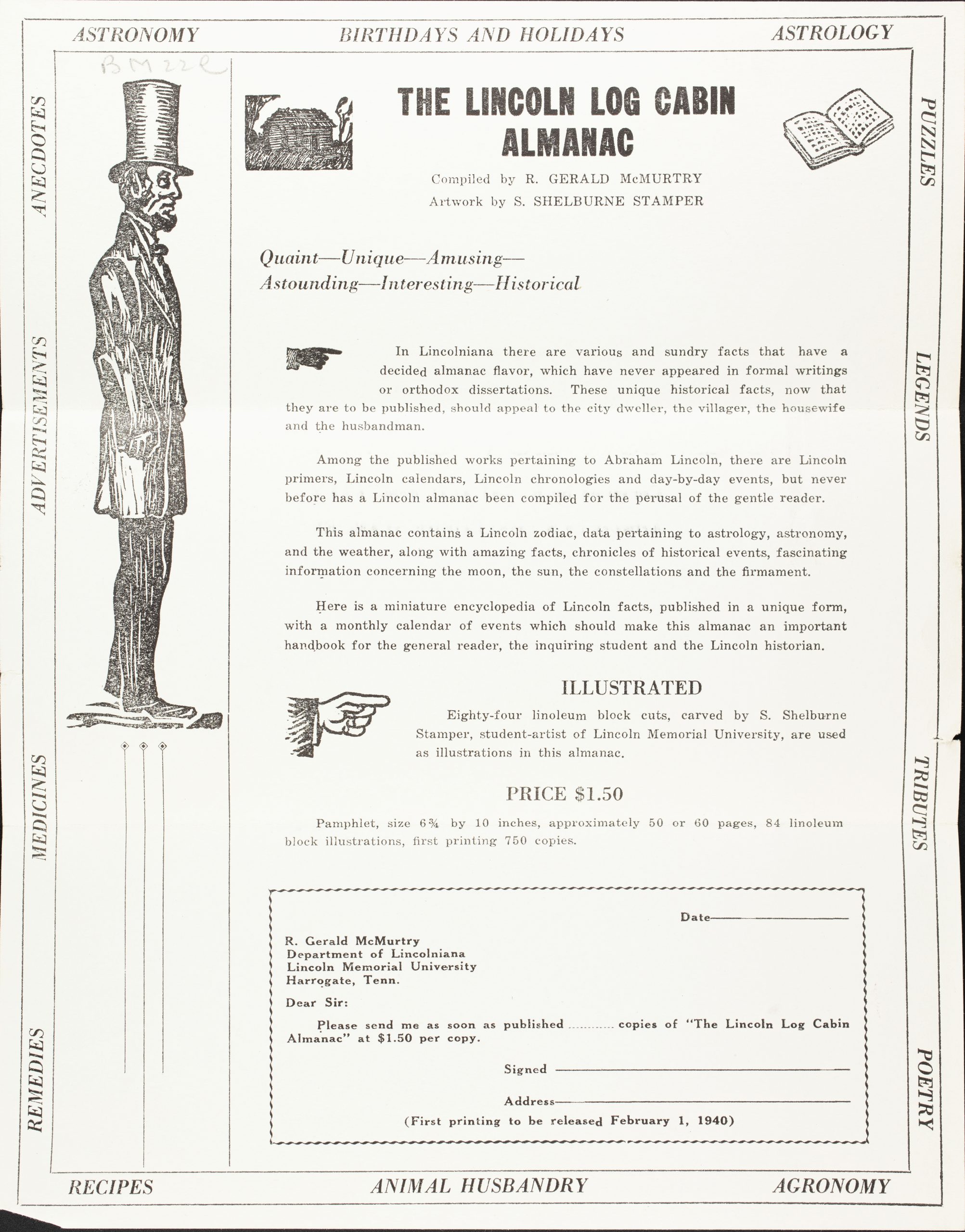 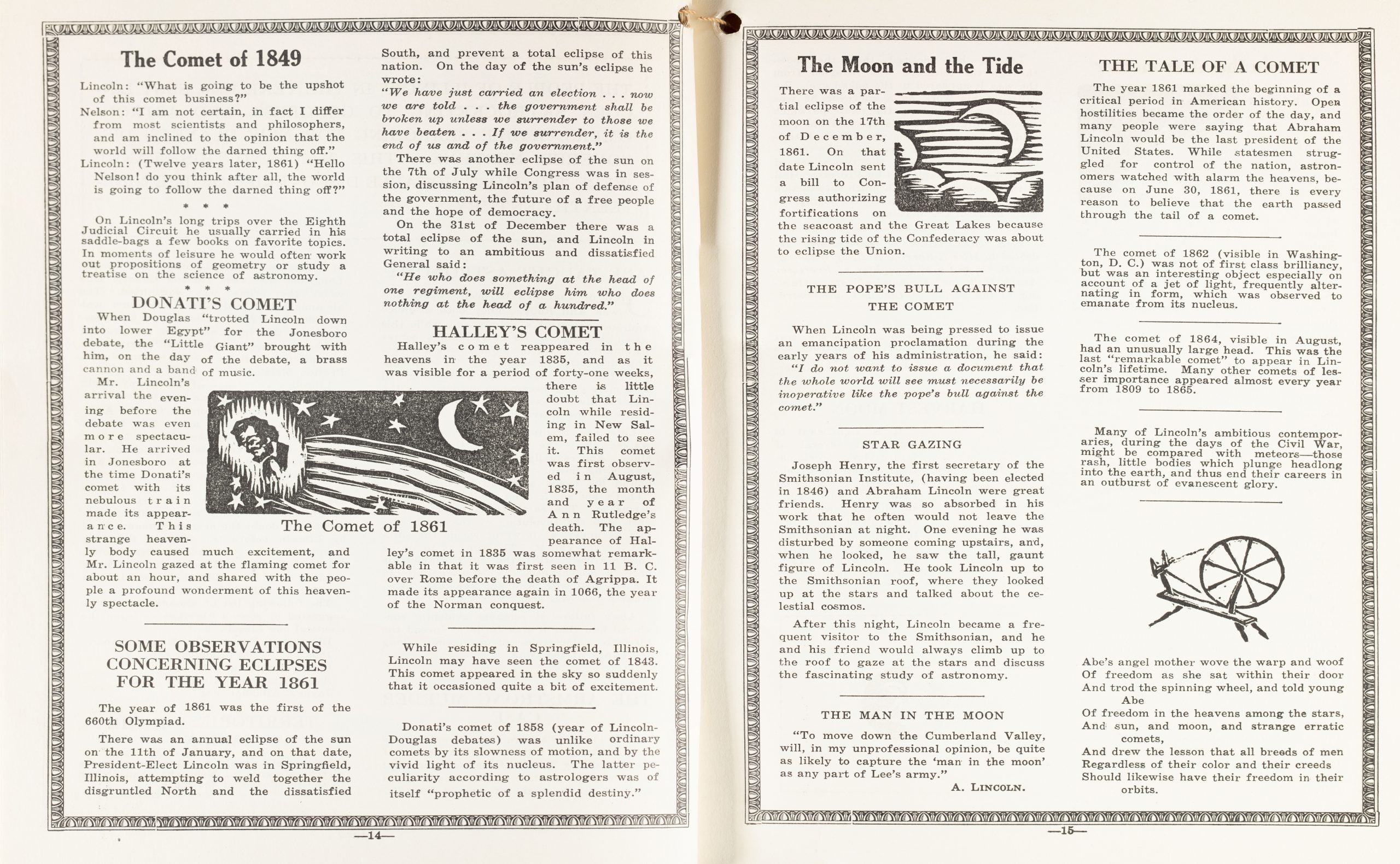 Printed by the Department of Lincolniana at Lincoln Memorial University (Harrogate, Tennessee) in 1940 and playfully boasting “very little scientific data concerning the earth, the constellations and the firmament,” this almanac spins Lincoln history and tidbits into traditional almanac-like sections, such as calendars, advertisements, recipes, puzzles, stories, and poems. 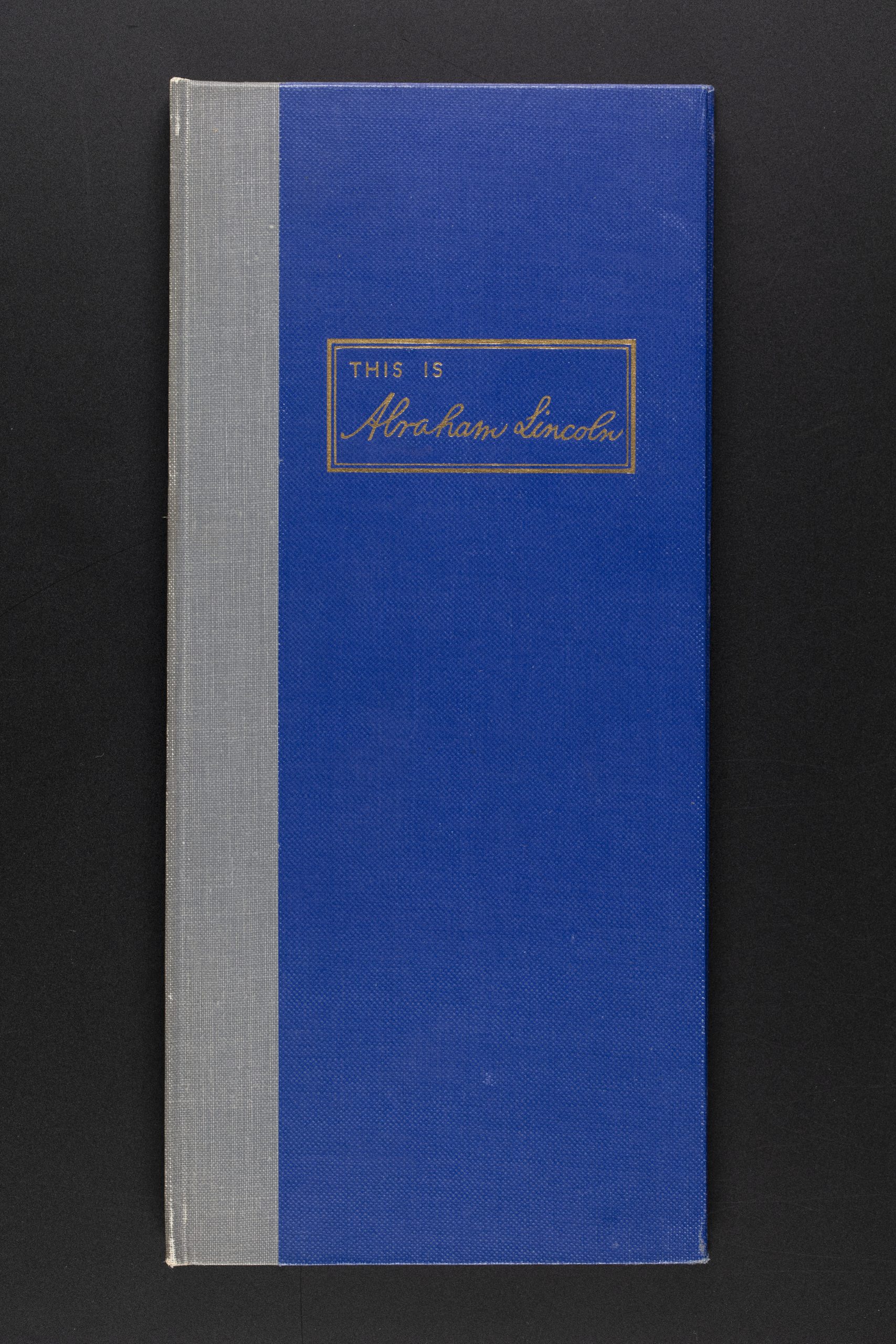 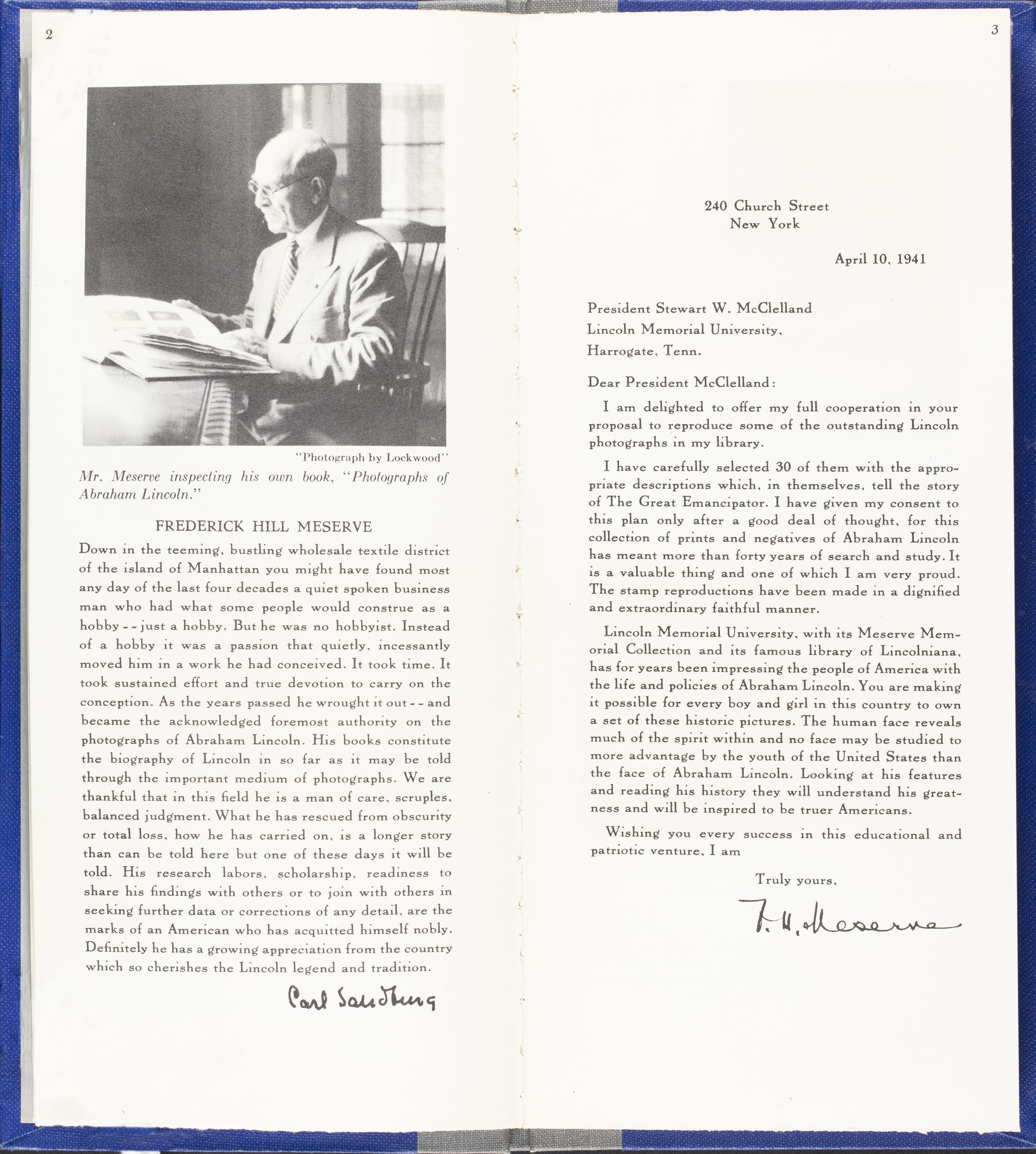 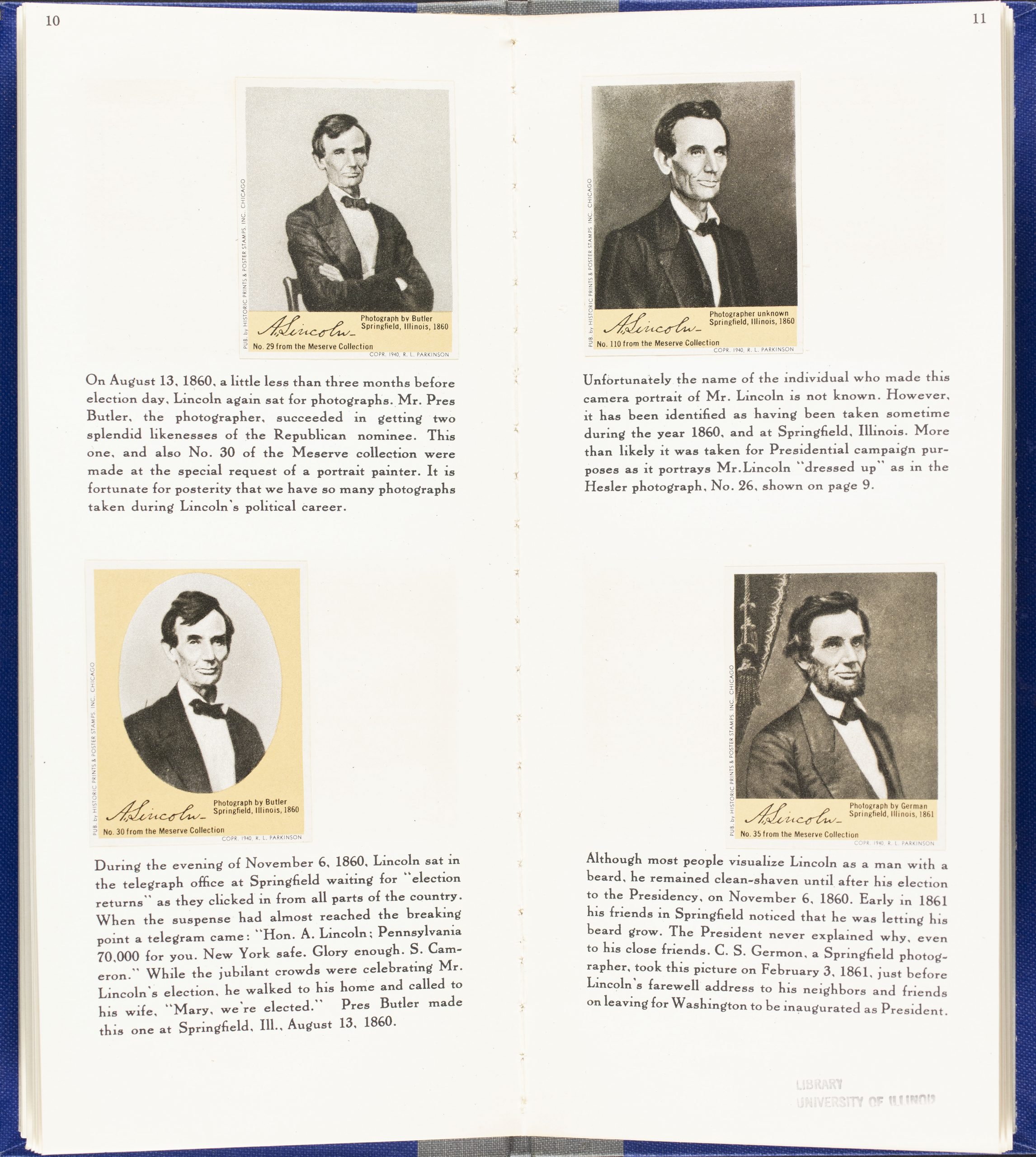 This book was created by Frederick Meserve, a Lincoln collector, and Carl Sandburg, a poet and Lincoln biographer, and features stamped-in photographs of Abraham Lincoln from Meserve’s personal collection. Each image is accompanied by a brief description with information such as the name of the photographer and when and where the photograph was taken. Meserve signed each of the 300 copies printed by Lincoln Memorial University (Harrogate, Tennessee) in 1941. 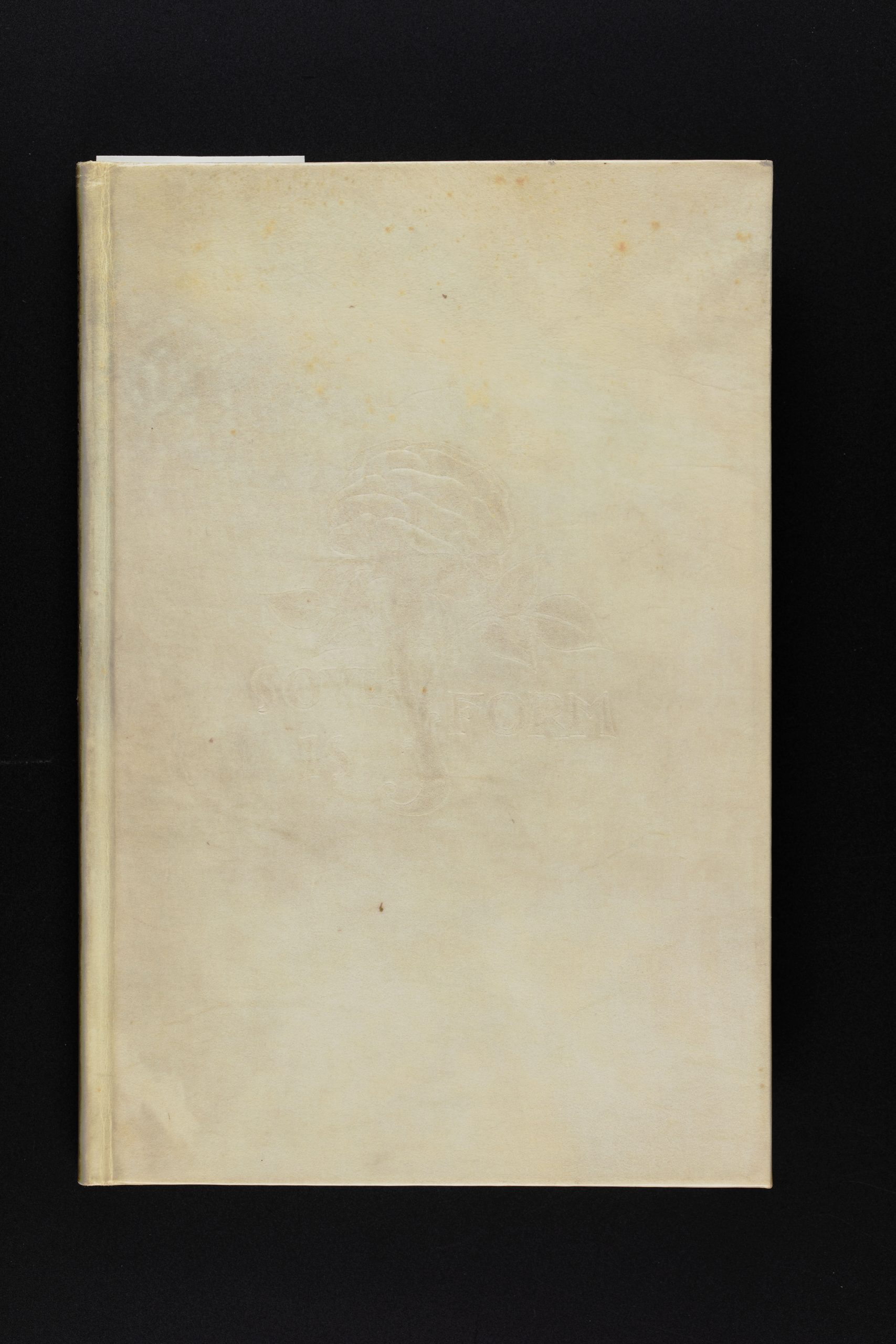 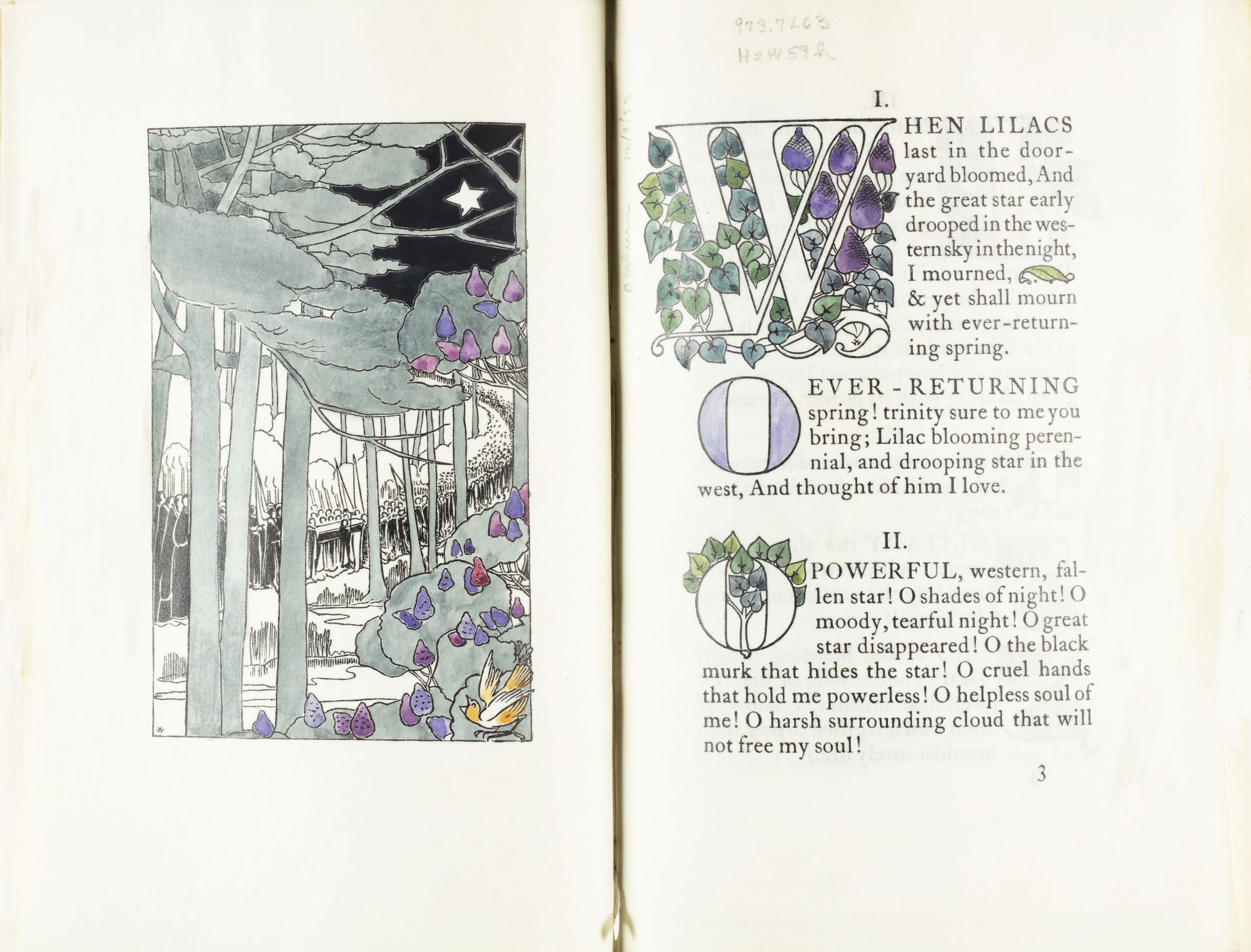 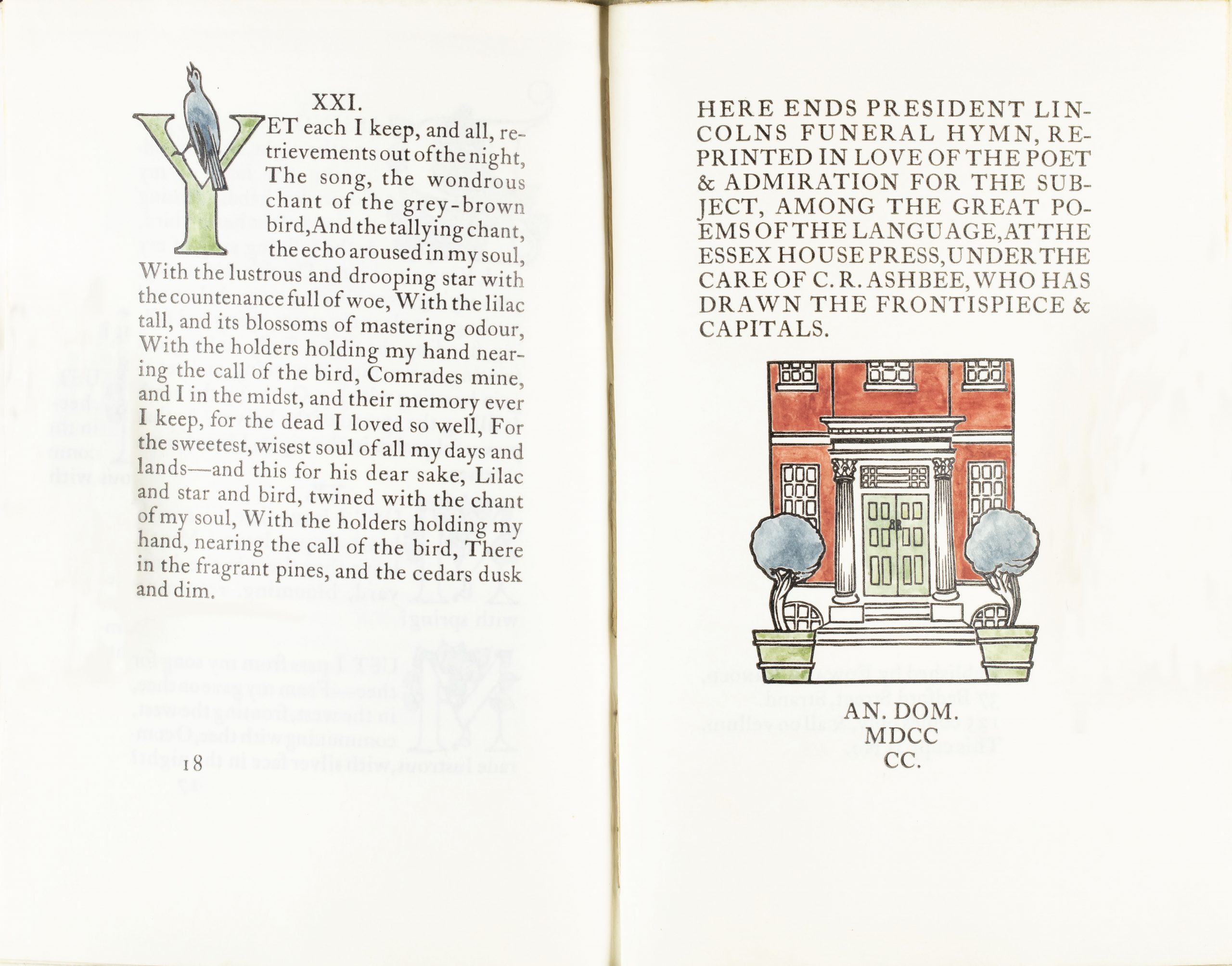 After the death of Abraham Lincoln, American poet Walt Whitman wrote several poems and elegies for the President, whom he greatly admired. Printed on vellum, this book contains the poem “When Lilacs Last in the Dooryard Bloom’d,” and was printed at Essex House Press (London, England) by Edward Arnold. It features a hand-colored frontispiece and capitals by C.R. Ashbee. This copy is No. 118 of the 135 copies printed. 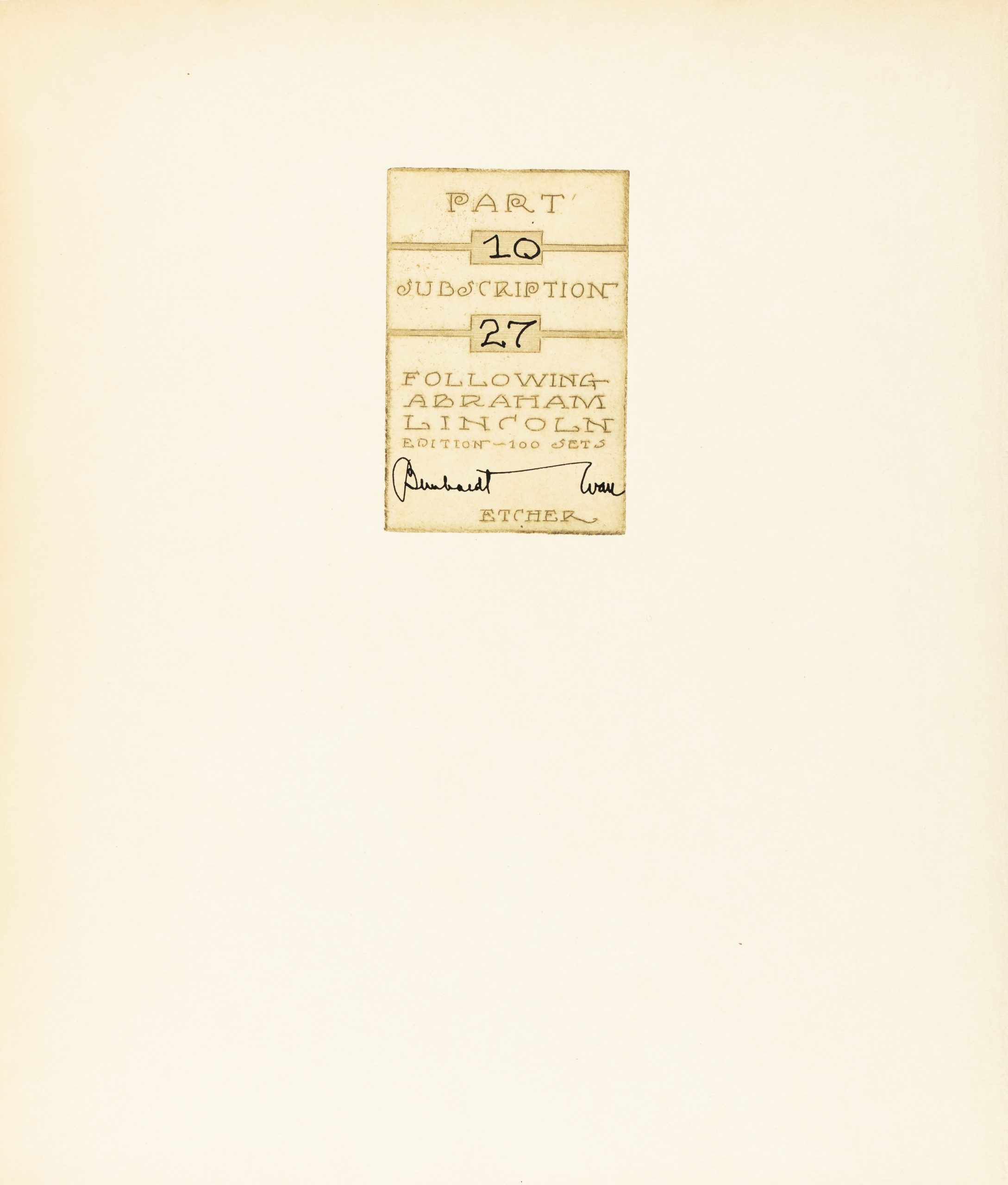 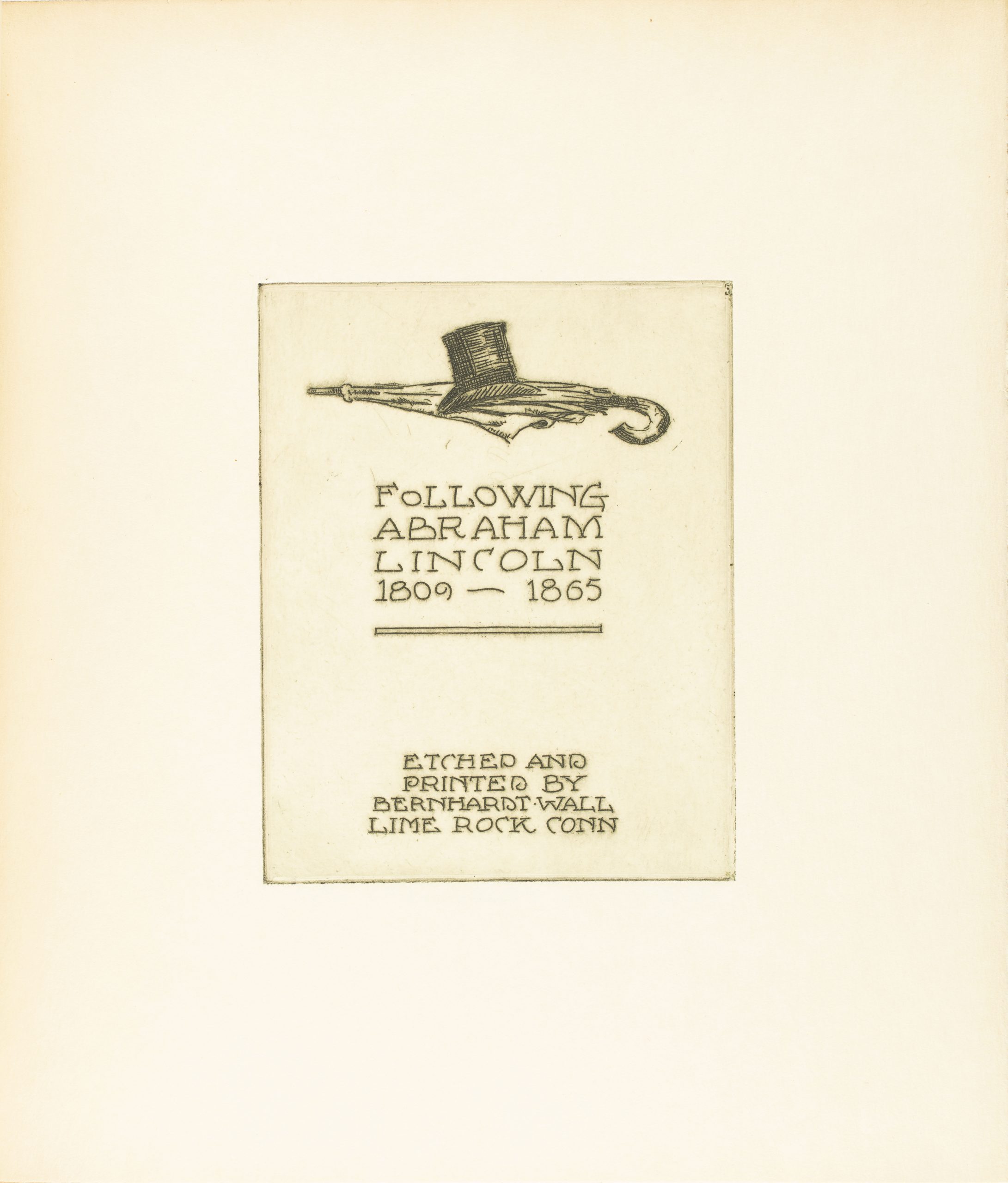 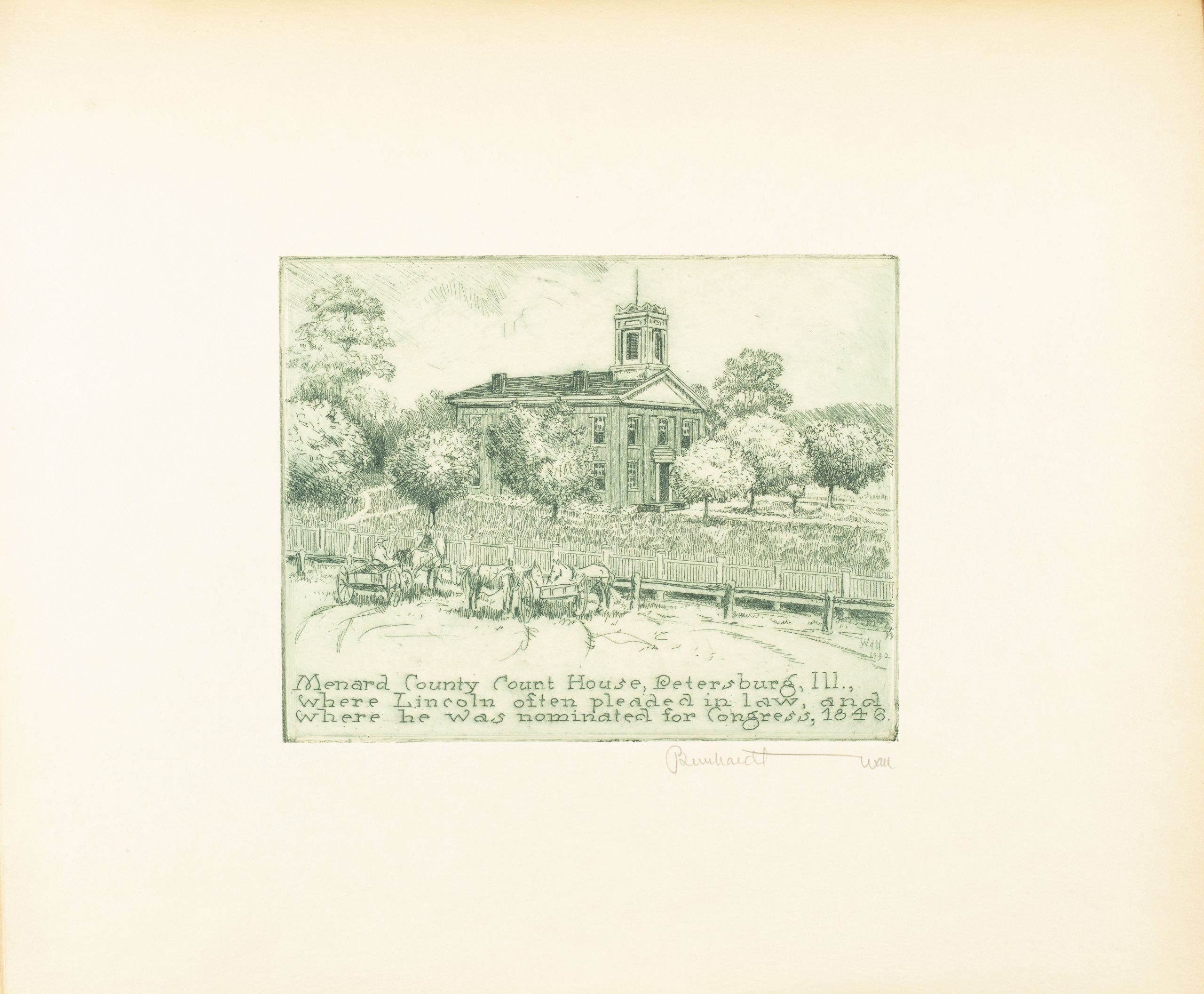 Most famous for his postcards, Bernhardt Wall had a strong interest in history, specifically with Abraham Lincoln. This project, a subscription-based book (limited to 100 subscribers) titled “Following Abraham Lincoln,” depicts scenes from Lincoln’s life from birth to death. Images were printed from plates etched by Bernhardt Wall in Lime Rock, Connecticut, between 1931-1942. These images are taken from Vol. 10. IHLC has the full 85-volume project.

These are just a few examples of items acquired with the original Horner donation, which included nearly 4,500 volumes of Lincolniana and formed the nucleus of the University’s Lincoln Room.

IHLC would like to thank the Rare Book & Manuscript Library for their imaging services.