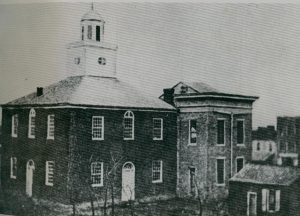 During the Civil War on March 28, 1864, anti-war Democrats clashed with Union soldiers on leave in Charleston, Illinois, on the Coles County courthouse square. This event, which would come to be known as the Charleston Riot, left nine dead and twelve wounded, making it one of the deadliest soldier-civilian encounters in the North during the Civil War.

In the 1860s Charleston was a small town of approximately 3,000 people in Coles County. The town was made up primarily of farmers and landowners, many of whom had either migrated to Coles County from the South, largely from Kentucky, or were descendants of those migrants. The county brought together two starkly different cultures and ideologies of northern and southern migrants. Many Midwestern farm families suffered economic losses with the war, and like many other towns throughout the country during the Civil War, Charleston was divided by the growing conflict.

Copperheads, also known as anti-war Democrats, Peace Democrats, or Butternuts, were Democrats in the Union who opposed the Civil War in favor of a peace agreement with the Confederates. The conflict between Copperheads and Republican civilians and Union soldiers intensified as the Civil War carried on, and it became more violent by early 1864. There had been many nonviolent incidents earlier throughout the war, such as Copperheads verbally harassing Union soldiers or Union soldiers forcing Copperheads to swear their allegiance to Lincoln and the Union, but by January and February of 1864 these altercations started becoming violent. By March, tensions reached a new high.

On March 28, 1864, Charleston’s square was particularly busy with the Circuit Court in session at the courthouse. There was also a Democratic rally planned with hundreds of Copperheads present, and approximately 40 to 50 Union soldiers from the Illinois 54th Infantry were in town before they had to report for duty in Mattoon. Based on the tension between these groups throughout the day, with sporadic bouts of shoving and yelling, Democratic leaders canceled their planned rally and suggested followers go home before the situation worsened.

Before the crowds in the square could disperse, an altercation broke out between Copperheads and Union soldiers and shooting erupted in the square. Witness accounts of the incident offer conflicting evidence of who fired the first shot, but within just a few moments nearly 100 shots had been fired. Reports also indicate that the Copperheads had stored weapons under hay and blankets in their wagons before the riot in preparation for any confrontation from the Union soldiers, while most of the soldiers were unarmed.

The day after the riot, more than 600 soldiers were assembled in Mattoon and Charleston. Many of the Copperheads involved in the riot fled the town or went into hiding. The riot made national headlines and became an example of anti-war sentiment. The deadly incident turned public opinion against anti-war groups like the Copperheads, particularly in Illinois. Fifty suspects were held and interrogated, and 29 of them were kept in custody in Springfield. Many, including Abraham Lincoln, feared that the Charleston Riot could mark the start of a Northern uprising of supporters of the Southern cause. In June, Lincoln suspended the prisoners’ writ of habeas corpus and had them relocated from Springfield to Fort Delaware until he could analyze the case further. However, he met resistance from the judge and residents of Coles County, including friends and family members of Lincoln’s, who advocated that the prisoners be returned the civil authorities. Lincoln ordered the prisoners to be returned to the Coles County sheriff in November and by the end of 1864, all those held were either released or exonerated. 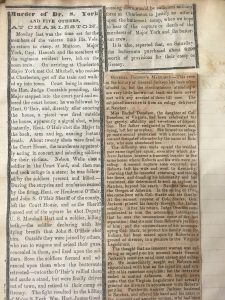 The IHLC’s James Russell Collection, 1859-1970 (MS 244) contains miscellaneous historical material, such as newspaper clippings, correspondence, and research notes, including information about the Charleston Riot. One newspaper clipping details the attack and its immediate aftermath, describing the scene of the shooting in the courthouse.

The IHLC’s collection of 1864 Election Political Cards (MS 1054) consists of two political cards expressing anti-Democrat sentiment leading up to the presidential election of 1864. In the 1864 election, the Democratic Party adapted a platform aligned with Copperheads, supporting an immediate end to the war. George B. McClellan, a former Union General, was chosen as the Democratic nominee and was ultimately defeated by incumbent Abraham Lincoln. The satirical political cards, which poke fun at the Copperheads and McClellan, include illustrations of a donkey, as well as insinuations and wordplays reflective of recent political and military events. 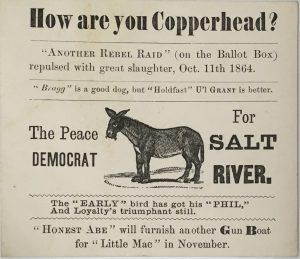 You can learn more by exploring some of our other collections with information about Copperheads here: https://www.library.illinois.edu/ihx/archon/index.php?p=core%2Fsearch&q=copperhead