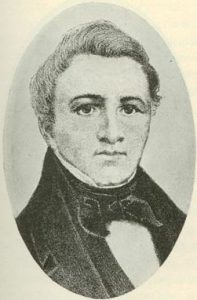 Joseph Duncan was a pioneer and Illinois politician who served in many roles throughout his career, including as the sixth Governor of Illinois from 1834 to 1838. Duncan was born in Paris, Kentucky, on February 22, 1794, and went on to serve in the War of 1812. He was later awarded the testimonial sword by a resolution of Congress for his role in the defense of Fort Stephenson near Sandusky, Ohio, in a battle in 1813.

Duncan moved from Kentucky to Illinois in 1818, the year Illinois achieved statehood. He purchased tracts of land in different counties throughout the state. Later in his career in Congress Duncan advocated for settlers, describing them as “brave, hardy, enterprising” men “possessing an ardent love of liberty, freedom and independence,” who “endured privations and hardships” giving up “all the comforts of society,” overcoming “difficulties which most gentlemen in Congress know nothing about.”

After moving to Illinois Duncan served as Jackson County’s Justice of the Peace from 1821 to 1823. In 1823 he was commissioned a Major General of the Illinois militia as a result of his military experience. In the summer of 1824, he ran for the State Senate and was elected at the age of thirty. One of his first votes on the Senate was for Morris Birkbeck to be elected Secretary of State.  Birkbeck was a strong anti-slavery candidate and worked to prevent Illinois from becoming a slave state.

Duncan was also Chairman on the Committee of Seminary Lands, and in this role Duncan recommended that local schools be established throughout the state, leading to a public school bill. Duncan had little formal education growing up, which some historians believe was a catalyst behind his interest in public education.

Duncan went on to serve as a member of Congress from 1827 to 1834. From 1827 until 1833 Duncan served as the sole Congressman from Illinois. He was especially interested in issues dealing with the west and its growth, such as land, internal improvements, and protecting settlers, and he became an active member of the Committee on Public Lands throughout his time in Congress.

In 1834 Duncan was elected Governor of Illinois, at which time he resigned from Congress and returned to Jacksonville with his family. He was sworn into office on December 3, 1834, and served as governor from 1834 to 1838. During this period the Internal Improvement Act was passed, which authorized a statewide public works program. Construction also began on the Illinois and Michigan Canal, which was important for the commercial and political progress of Illinois at a time with no railroads when travel largely conducted by water. The decision was also made in 1837 for the state capital to move to Springfield.

Duncan’s term ended in December of 1838. He did not run for governor again that year, and Thomas Carlin was elected. Four years later Duncan unsuccessfully ran for reelection in 1842 after he was nominated by the Whigs. His opponent, Adam W. Snyder, died during the campaign, and Thomas Ford became his new rival and the successful candidate. Duncan returned to his retirement from public service. He died in 1844 at the age of forty-nine and was buried in Diamond Grove Cemetery in Jacksonville. 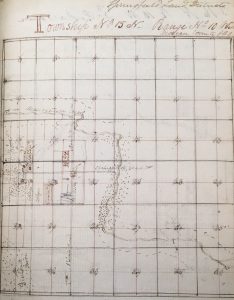 The Joseph Duncan Record Book, 1834-1841 (MS 599) contains Duncan’s records, including hand-sketched maps of townships where Duncan had land holdings, newspaper clippings about Duncan’s administration as governor, notes and diary entries, pages from the Journals of the House and Senate for 1840-1841, and excerpts from state documents with printings of Duncan’s speeches and proposals.

The IHLC also holds the Duncan Family Correspondence, 1849-1882 (MS 600), a collection of transcripts of correspondence between Elizabeth Caldwell Duncan, the wife of Joseph Duncan, and other members of the Duncan family. Topics include personal news, the status of slaves, abolition, the Civil War, and the funerals of President and Mrs. Lincoln.

“Duncan, Joseph.” Marquis Who Was Who in America 1607-1984, Marquis Who’s Who LLC, 2009. http://proxy2.library.illinois.edu/login?url=https://search.credoreference.com/content/entry/marqwas/duncan_joseph/0?institutionId=386