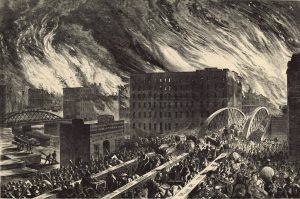 The Chicago Fire of 1871, commonly referred to as the Great Chicago Fire, caused immense devastation over the course of two days. The fire started on the night of October 8, and by the time the blaze had dispersed on the morning of October 10, huge portions of the city had burned down. The fire destroyed thousands of buildings, left nearly 100,000 people homeless, and caused about $200 million in damage.

In 1871 Chicago was a thriving city as railroads developed and canals opened to connect the Great Lakes with the Mississippi River. After the Civil War Chicago had grown into a transportation hub and the population and industry expanded. During this period of development, though, the city’s new construction was built mostly from wood because it was a cheap and accessible material.

The fire broke out in the southwest end of the city around 9 p.m. on October 8, 1871. Although the story that a dairy cow had kicked over a lantern that started the fire quickly grew to legend, the true cause of the fire remains a mystery. The fire spread quickly, and months of drought had left the city’s wooden structures particularly susceptible to burning. The fire moved from the southwest to the northeast of the city, blazing through the business district and jumping the Chicago River to continue on its path.

Alfred L. Sewell published an account of the disaster in 1871, shortly after the fire, titled “The Great Calamity!” Scenes, Incidents and Lessons of the Great Chicago Fire of the 8th and 9th of October, 1871. His account described the scene of the disaster:

All night long the devouring flames raged, rushing furiously onward – a veritable sea of hissing, crackling, darting, roaring fire. The cries of the terrified populace were drowned by the noise of explosions, the thunderings of falling walls, and the terrible roaring of the gale. The conflagration had scarcely struck and enveloped one building before its darting tongues licked up its neighbor, and leaped hither and thither to the pitchy roofs and through the windows of a score of others, soon wrapping them in a common sheet of seething flame. Buildings were blown up with powder to stay the progress of the burning, but without avail. The heat of the vast flaming sea was like a very hell, and nothing before it could withstand its power. People in the streets half a mile in advance of it were blinded by the driving smoke and cinders, and almost roasted by the heat.

A combination of rain, Lake Michigan serving as a boundary, and stretches of open lots on the North Side finally caused the fire to die out over 30 hours after it first sparked. The city turned to chaos in the wake of the disaster, and Mayor Roswell B. Mason declared martial law in an attempt to preserve the peace and dispel civil unrest. 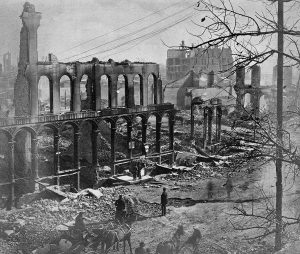 It was early on Tuesday morning, October 10th, when the flames finally burned themselves out for lack of fuel in the wind’s direction, after having raged furiously for a space of about thirty-six hours. O, what a horrible scene was presented to the view of the spectator on that gloomy Tuesday, and for days afterward! Heaps of ruins, and here and there a standing wall, as far as the eye could reach, and far beyond, for a stretch of four miles from the locality of the beginning of the conflagration, north-eastwardly to beyond Lincoln Park, where it stopped, all was – yea, is now – one vast scene of desolation, which, in its solemn and frightful ghastliness, exceeds all scenes of ancient ruined cities we have ever read about in books. For three days after the fire we walked through the streets, covered every-where with heaps of debris and parts of walls, and could not help comparing ourselves to ghosts wandering through a vast grave-yard. “Am I really awake, or am I having a horrible dream?” is a question we seriously asked ourselves many times, so difficult was it to bring ourselves to a realization of the awful fact that all those magnificent streets, all those noble edifices, all those grand palaces, which but yesterday were the pride and glory of the chief Western metropolis, are to-day indeed a mass of scattered, shapeless, worthless ruins!

Despite the enormity of the damage caused by the fire, much of the city’s infrastructure remained intact. Water supplies, railroad lines, sewage systems, and grain elevators were largely undamaged, which allowed the city to rebuild on this framework relatively quickly. The stockyards and lumberyards to the South and West sides of the city were also largely unharmed. Although the fire was a catastrophic event, its aftermath led to the city’s architectural revitalization. Architects and urban planners moved away from wood in favor of steel and stone, and new building designs focused on safety and efficiency. Architects were drawn to Chicago for the opportunity to be involved in rebuilding the city, and a new school of architecture called the Chicago School emerged. With this new growth, the city’s population and economy grew as well. Chicago hosted the World’s Columbian Exposition in 1893, which further boosted the economy with millions of visitors exploring the city’s new architecture and growth throughout the six-month span of the fair. The World’s Fair also served as a symbol to the rest of the world that Chicago was on the rise once more. 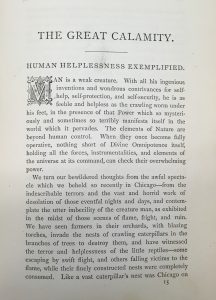 For more first-hand accounts of the fire you can also read The Great Fire: Leading Newspaper Accounts of the Terrible Chicago Conflagration, Including Descriptions of the Origins and Progress of the Fire, By Eye-Witnesses, Correspondents, Etc. (Call number: 977.31 G79811) and The Lost City! Drama of the Fire Fiend! Or Chicago, As It Was, and As it Is! And Its Glorious Future! (Call number: 977.31 L97l).