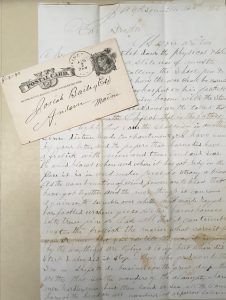 The Bailey Family Letters, 1855-1889 (MS 445) contain 52 letters written to Josiah Bailey by members of his family in Illinois. Most of the letters written to Josiah are from his brother, Isaac Bailey, who worked for Illinois railroad companies throughout his life. Isaac wrote to Josiah, who was still in Maine, telling him about his family life, health, and general accounts of political issues of the time. Isaac also described his experiences working in different roles for railroad companies, which offers a unique look at a career with the railroad in the 19th century.

Isaac Bailey was born in Cumberland County, Maine, in 1829. He was raised on a farm and went on to work for a number of railroads throughout his life. He began working as a section hand, a role that involved laying and maintaining railroad tracks in a specific portion – or section – of the railroad. He then worked a section boss where he oversaw the trackmen employed within his section of the railroad and was responsible for the maintenance of his section. In 1854 he came to Illinois and worked as a roadmaster for the Chicago, Burlington and Quincy Railroad. The position of roadmaster was a senior role that required years of experience; a roadmaster was assigned a territory of track on the railroad to maintain and oversaw all the other employees in this territory while coordinating with other roadmasters on the rail line in surrounding territories. He later worked as the roadmaster on the Hannibal and St. Joseph Railroad for seven months, then worked for two years on the Mississippi Central Railroad, and finally worked as a roadmaster on the Hannibal branch of the Wabash Railroad.

On October 9, 1861, Isaac married Elizabeth (“Lizzie”) Pitney in Hancock County, and the couple had five children together. Isaac and his family remained based in different towns in Illinois through much of his career, but his jobs frequently took him to other states to work on different portions of the rail lines, such as in Indiana and Mississippi. During his time working for the railroad, Isaac wrote letters to his brother Josiah, who was still living in Maine. Many of the letters use minimal punctuation or capitalization and contain spelling errors.

Isaac frequently lamented the tardiness of his letters to his brother and apologized for long stretches of time between his replies. Several times he described finding time to compose his letters based on circumstance, such as a rainy day or between tasks at work. On one occasion he noted, “This a.m. our Passenger Train going west is an hour late, so we will stop to talk a few moments.” In another letter he described the busy schedule that had kept him from replying:

I am stationed on a difficult part of the road: three miles of it nearly washed away last spring so ever since we have had to keep a work train on it & it has caused me to have care of 45 to 25 men without scarsely a day to rest or look after the ods & ends. It has so come to pass that on this 15th day of August that the Irish have a holly day so I am let loos.

On March 25, 1860, Isaac told his brother, “Well railroading goes pretty well my old trade is new every morning & the ground where I have been during the day looks fresh every evening as long as Isaac gets his $50 & board per month.” In a reply to one of his brother’s letters not long after, Isaac explained that he had recently taken a new job on the Quincy & Toledo Railroad. He wrote to Josiah from Versailles in Brown County, Illinois, between November of 1860 and November of 1861 replying to an inquiry from Josiah as to whether he had made a career change and gone into farming. Isaac replied, “I am not farming yet I am the same old railroader that I have been for years & see no other prospect ahead – well it will do me at present at least I have to make it do me.”

Isaac’s letters indicate that around 1873 he was injured in a workplace accident. In the 19th century railroad workers faced many risks on the job, and long hours working closely with the cars and rail lines led to many injuries, and even fatalities. Accident statistics from railroad companies in 1889 revealed that one in every 375 employees had been killed in the previous year and one in every 35 had been injured. Although his letters do not describe the details of the incident, the injury and its aftermath are regularly mentioned throughout the remaining letters. Isaac’s first mention of the injury within this collection of correspondence was in a letter marked October 9, 1873, by which time he and his family had moved to Griggsville, Illinois, a community in northeast Pike County. In this letter Isaac described that he continued to work, despite the accident, but was sent home and granted his request for nights at home. He went on to write, “I am improving slowly have poore use of my legs especially the left. I would like very much to come home this year & see mother & all the folks but am some in debt & on acct. of my misfortune will have to wait an other year.”

The next description of this injury came two years letter in a letter marked February 3, 1875:

You remember that I was sent to Indianna a bout two years ago & got badly hurt – as soon as I could get a bout I was let come back to Griggsville Pike Co Ills where I went from & where our home is for nearly the last 5 years – I have held my position as Roadmaster all this while – though I am badly crippled or paralized in the legs – at that time was 1200$ or 1400$ in debt, am out now – have a 2500.00$ property here at G & some 3000.00$ at Bowensburgh.

Isaac continued to experience issues with his legs and varying degrees of paralysis, but he continued to work for the railroad throughout this time. In 1883 he attended the National Exposition of Railway Appliances in Chicago and described his experiences to Josiah:

I like to forgot to tell that I took in the Chicago Exhibition of Railway appliances – yes I was (there) from the 12th to the 16th Saw the first Engine George Stevenson ever made – the puffing billy and the first Eng. That was run in America and the first run in Nova Scotia it was named the Sampson – and the Engineer who run it was with it at Chicago. I think he is the oldest Eng’eer now living. I saw many things, was at a rail rolling mill that rolled out a raile long enough to cut in to five thirty foot rails, was at the Pullman car works at South Chicago had a boat rid on the Lake and was at the Lincoln park.

A letter from Isaac later that year contains one of his final references to his work on the railroad within this collection. In it he described how he did not keep his position as roadmaster and that he was given an easier job of tie inspection while another employee took his old role. Isaac considered how his employers had given him some leeway in his schedule with no difference in pay. He suggested, “I suppose they make allowance on account of my getting hurt when they took me to Indiana ten years a go – my left leg is num all the time & not very stout but is much better than no leg.”

The collection also contains letters to Josiah from his sister-in-law Lizzie Bailey (Isaac’s wife), his cousin Thomas Bailey, his son E.M. Bailey, his cousin Sally B. Haines, his brother Kimball Bailey, and Enoch A. Simpson.