Leonard Volk was an American sculptor famous for making one of only two life masks of Abraham Lincoln. Volk was born in Wellstown (now Wells), New York, in 1828, and his family later moved to Pittsfield, Massachusetts, for his father’s trade as a marble cutter. Volk joined his father in this work, and he later went to St. Louis in 1848 to study drawing and sculpture.

In 1852 Volk married Emily Clarissa King Barlow, whose cousin, Senator Stephen A. Douglas, supported Volk’s art and provided financial assistance for Volk to study in Rome. Volk settled in Chicago upon his return and opened a studio there in 1857. Douglas also introduced Volk to Abraham Lincoln, and Volk spent years making close studies of both Lincoln and Douglas throughout their political careers.

Douglas introduced Volk to Lincoln in 1858 when they were running against each other for the Illinois seat in the U.S. Senate, and Volk asked Lincoln to sit for him so he could make a bust. Lincoln agreed, and two years later during his visit to Chicago in April of 1860, he sat for Volk. Volk made a life mask using wet plaster to reduce the number of sittings that would be needed for a bust. The life mask and subsequent bust that Volk created became extremely useful to later artists who depicted Lincoln in sculptures or paintings. Volk recalled the process in an extract from “The Lincoln Life Mask and How It Was Made”: 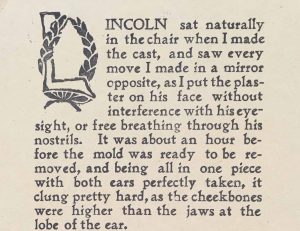 Volk asked Lincoln if he could make casts of his hands as well to use for works in sculpture, and once again Lincoln agreed. He sat for Volk on May 20, 1860, two days after the Republican Party nominated Lincoln for the presidency. Volk reminisced of the experience: 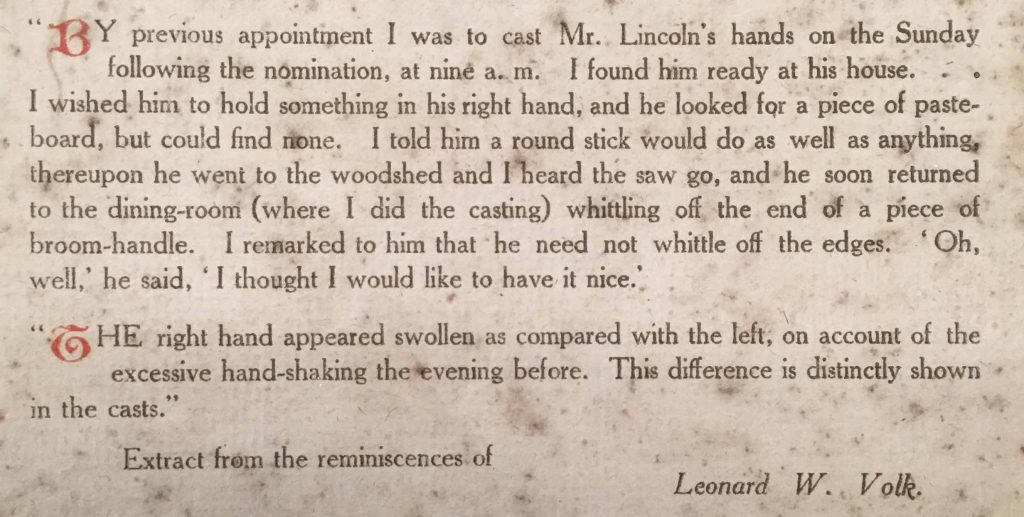 Volk went on to build a reputation as a leading figure in Chicago’s arts scene through his work and teaching. In 1866, he and other artists formed the Chicago Academy of Design, which would later become the School of the Art Institute of Chicago. He created numerous portraits, busts, and monuments through his career, including his Douglas monument in Chicago and statues of Lincoln and Douglas in the capitol at Springfield.

Leonard and Emily’s son, Stephen A. Douglas Volk (who went by Douglas Volk), was born in 1856 and followed in his father’s path to became a noted figure in the art world as a figure and portrait painter. Douglas grew up in Chicago, and at the age of fourteen he moved to Europe to study art as his father had. When he returned to the United States in 1879, he worked as an instructor at the Cooper Union, the Art Students League of New York, and the National Academy of Design. In 1886 Douglas helped establish the Minneapolis School of Fine Art, Minnesota, and served as its director until 1893. Douglas had three of his works exhibited at the 1893 World’s Columbian Exposition in Chicago, one of which was awarded a medal. Douglas also completed a series of portraits of Abraham Lincoln throughout his career.

The Leonard and Douglas Volk Collection, 1872-1953 (MS 400) contains personal and professional papers of Leonard and Douglas Volk, including correspondence, publications, sketches, and other materials. Douglas’s materials are primarily connected to the later years of his career with a focus on his Abraham Lincoln portraits. The IHLC also holds copies of Leonard Volk’s face casts of Abraham Lincoln and Stephen Douglas, along with a copy of Lincoln’s hand casts and a sculpting mallet used by Volk.

Rankin, Henry Bascom. Our first American, Abraham Lincoln: An appeal to the citizens of our state and country and The Lincoln life mask: with some comments and corrections on Leonard W. Volk’s Century magazine article. Springfield, IL: Journal of the Illinois State Historical Society, 1915. Call number: 973.7 L63ER16O

“Volk, Douglas.” Marquis Who Was Who in America 1607-1984, Marquis Who’s Who LLC, 2009. http://proxy2.library.illinois.edu/login?url=https://search.credoreference.com/content/entry/marqwas/volk_douglas/0?institutionId=386

2 Replies to “Lincoln in Art: The Leonard and Douglas Volk Collection”