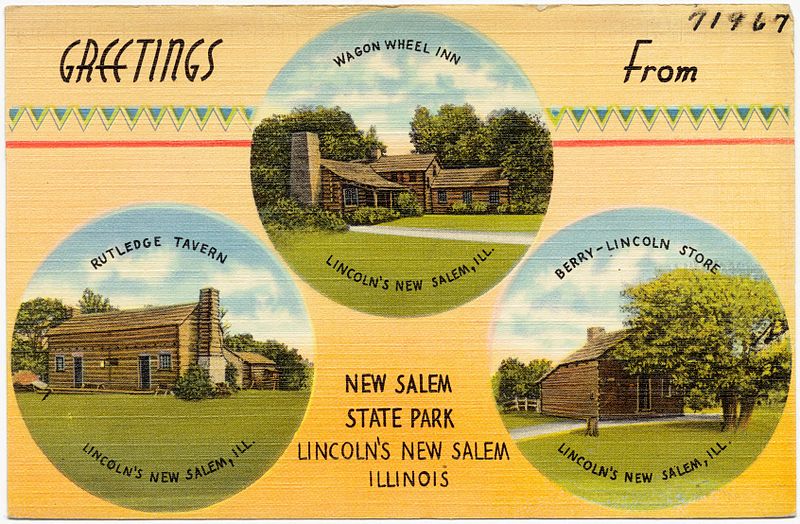 This week for #SmallTownSaturday, we’re traveling back to the place Abraham Lincoln first called home as an adult in Illinois – the village of New Salem – near what’s now Petersburg, IL (pop. 2,299)!

New Salem’s origins can be traced to 1828 when James Rutledge, originally of South Carolina, and his relative John Camron, originally from Georgia, moved their families from Kentucky and settled on a bluff overlooking the Sangamon River’s west bank. There, Rutledge and Camron hoped to build a dam and a grist- and sawmill. They petitioned the state for permission to dam the river and began construction in early 1829. The new mill proved to be a tremendously successful enterprise for the two families with farmers coming from as far as one-hundred miles away. So fruitful in fact was the mill that James Camron, the land’s titleholder, hired the surveyor Reuben S. Harrison in October of that same year to plat the site of a new town: New Salem.

This fledgling village soon grew into the local commercial center. With a position along a road and a stage line passing through that facilitated travel to other towns like Springfield, New Salem sprouted quickly. Besides attracting two doctors as residents, the village saw a range of small businesses crop up including grocery and dry good stores, a hatter and a blacksmith, an inn, a wheelwright shop, a tannery, a tavern, a ferry, shoemaking shop, and more. The residents had several options for entertainment as well. Beyond the expected activities of wrestling or shooting matches, races, dances, quilting bees, and barbecues, the people of New Salem also formed temperance, debate, and literary societies.

Soon to be among these residents was a “friendless, uneducated, penniless boy:” a twenty-one-year-old Abraham Lincoln. Building a flatboat at Sangamo Town in the spring of 1831, Lincoln, his step-brother John Johnston, and cousin John Hanks had been hired by one Denton Offutt to help take a load of goods down to New Orleans. While Lincoln did eventually make it to Louisiana, along the way he and the crew briefly got their flatboat stuck on Camron and Rutledge’s dam at New Salem. Offutt, seeing the town’s growth so far, recognized an opportunity. Upon their return from the South, Offutt resolved, he would open a store in the village with Lincoln as its clerk.

New Salem thus became the first place Lincoln settled in Illinois after striking out on his own as an adult. Not long after moving there, in August of the same year, it also became the first place he ever voted. Offutt’s store opened in September, and Lincoln soon immersed himself in much of what the town had to offer, wrestling with newfound friends and joining the local debate society. 1832 proved a pivotal year as well. Early on, Lincoln – having very little in the way of formal education – obtained a copy of Kirkham’s Grammar and began studying under the tutelage of Mentor Graham, the New Salem schoolteacher. Soon thereafter, on March 9th, Lincoln wrote to the Sango Journal newspaper announcing himself as a candidate for a seat in the Illinois legislature. Barely one month later, Governor John Reynolds called up the Illinois Militia to counter the perceived threat of Chief Black Hawk, and the young Lincoln enlisted.

After an uneventful service in the militia, during which time he was elected Captain for his company, Lincoln returned to New Salem. Offutt’s store had closed and, with just two weeks left before the election and all his campaign time spent marching around the state, Lincoln’s chances at a seat in the legislature were slim. Although he failed in his first attempt at seeking public office, Abraham Lincoln nonetheless persisted and spent the next five years working towards his ambitions. The most immediately pressing matter was employment, which he found by entering into a partnership with William F. Berry to open a new goods store in the village. While that venture lasted only a few months, in April 1833 Lincoln was appointed to his first public office – postmaster, an office he’d occupy for the next three years. During that time, Lincoln also secured an appointment as deputy surveyor for Sangamon County, informally studied law under John Stuart, obtained a license to practice law, and finally took up his first elected office as a legislator.

By 1837 though, Lincoln the lawyer and legislator saw little prospect left for him in New Salem. Earlier, in late 1835 and 1836, Hezekiah King and John Taylor hired Lincoln to survey and plat a new town: Petersburg, Illinois. With a more accessible location than even New Salem had, many of the latter village’s residents also began to pack up and resettle at the new site. The post office was moved there in 1836 and, when Menard County was separated from Sangamon County in 1839, Petersburg was selected as the new county seat. By 1840, largely populated by former New Salem residents, it had established itself as the new local commercial hub and New Salem was abandoned.

Today, thanks to restoration efforts, you can still explore the little Illinois village where Abraham Lincoln first came into his own as a lawyer and a statesman. Located just two miles from the original site, Petersburg proudly proclaims itself as the “gateway to historic New Salem.”

Want to know more about this fascinating place in Illinois history? Stop by the Illinois History and Lincoln Collections to dive deeper into the New Salem story with books like Lincoln’s New Salem by Benjamin Thomas or manuscript collections like Charles Maltby’s recollections of Abraham Lincoln.