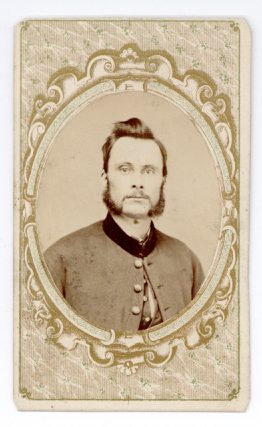 Before the Civil War, Jonathan Catlin was a farmer in Dekalb County. He joined Company G of the 52nd Illinois Volunteer Infantry in September 1861. The 52nd Regiment was organized at Geneva, Illinois and mustered into federal service on November 19, 1861. The regiment engaged in the Battle of Shiloh, the Siege of Corinth, operations against Vicksburg, the Atlanta Campaign, and the March to the Sea.

Throughout the war, Catlin recorded his experiences in a diary, commenting on battles and skirmishes. On April 6, 1862, Catlin wrote about the Battle of Shiloh:

The Rebels made a general attack on early Sunday morning, we fought them hard all day, when came on we had lost a great deal of ground and cut up badly, we lay Sunday night on the banks of the river, it rained very hard in the night, but we were up and at them in the morning early and after some hard fighting succeeded in driving them from our grounds we meeting with but very little loss.

In a separate letter dated August 7, 1863, Catlin offered an interesting account of desertion. Desertion happened on both sides of the war. At its highest point, the Union had one deserter for every seven soldiers, with the Confederacy experiencing one in nine. In his letter, Catlin wrote:

I have nothing new to write as there has been nothing very exciting going on since I last wrote to you, with the exception of the execution of one of our Alabama cavalry, which took place on the 27th of July. Charge desertion from his post while on picket duty, and going to the Rebel army where he was taken again as prisoner and shot. Previous to joining our army he was in the Rebel service, but deserted and came to us. I think he was merely acting like [a] spy. Our whole garrison was called out to witness the scene…The prisoner was marched in front of the whole length of our line. Behind his coffin was carried by four men…It was one of the most effecting scenes that I have ever witnessed since in the army, and I hope never to witness another.

Catlin reenlisted as a veteran on December 25, 1863. In July 1864, he took ill. Catlin spent four months in various Union hospitals recovering. By November 1864, Catlin had recuperated and received furlough for 30 days. Catlin returned to the war, but after other bouts of illness, he was officially discharged from the Union in March 1865. The 52nd Regiment disbanded on July 5, 1865.

Swadling, John. Historical Memoranda of the 52nd Regiment Illinois Infantry Volunteers: From Its Organization, Nov. 19th, 1861, to Its Muster out … on the 6th Day of July, 1865. Elgin: Gilbert and Post Printers, 1868.