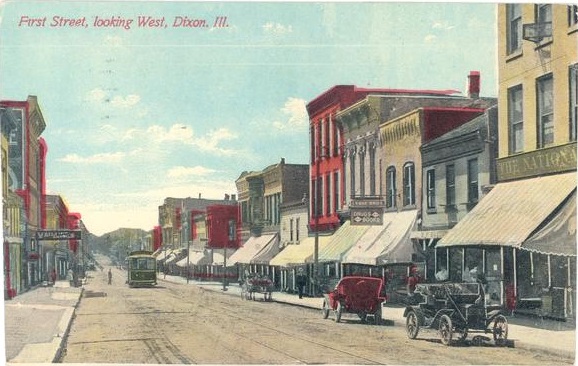 For this week’s #SmallTownSaturday we’re travelling to Dixon, Illinois (pop. 15,135)! This town is situated along the Rock River in northern Illinois in what is known as the Rock River Valley region.

Before white settlers moved into Illinois’ Rock River region, it was home to various indigenous groups, the oldest known being the Illini. Eventually the Illini were driven further south by a coalition of other indigenous tribes, mainly the Sauks and Foxes. These indigenous tribes lived along the  Rock River and prevented white settlers from fully inhabiting the region. It was not until the end of the Black Hawk War in 1832 that this region was truly open to settlement by non-indigenous peoples.

Originally known as “Ogee’s Ferry,” Dixon began as a business run by Joseph Ogee to ferry those who wished to work the mines in Galena across Rock River. In 1830, John Dixon bought the ferry and accompanying cabin and post office. He later renamed the site and ferry “Dixon’s Ferry.” John Dixon was fairly respected by the indigenous groups of the area. He conducted business with them in a way that allowed him to gain their confidence and friendship, something that proved useful during the Black Hawk War.

In 1832, the Black Hawk War broke out when Black Hawk crossed the Mississippi with a band of men, women, and children in order to take possession of their old lands. John Dixon was advised of their approach but decided to stay rather than leave his home. As a friend of the Winnebagoes, he was promised by a leading chief, Pachinka, that since the Winnebagoes owned the lands which Black Hawk’s band would be travelling through, Dixon would not be harmed.

Dixon’s Ferry became a rendezvous point for U.S. soldiers during the Black Hawk War. Fort Dixon was built under the command of Colonel Zachary Taylor on the north side of the Rock River. It was here that battalions were sent to spy on the indigenous groups and their activities, as well as prepare to engage them in combat. Black Hawk surrendered in August 1832, marking the end of the war.

This is only the beginning — Dixon’s story doesn’t stop here! Visit the IHLC to find out more about any of our featured #SmallTownSaturdays!

The image above is a 1909 postcard of Dixon. Courtesy of the Regional History Center at Northern Illinois University. http://digital.lib.niu.edu/islandora/object/rhcrc%3A490