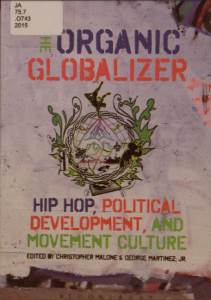 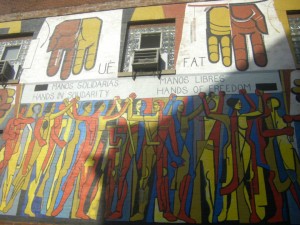 Women’s History Month may be coming to an end, but why not continue recognizing and celebrating the women that have shaped our lives and the direction of international hip-hop culture. In this week’s blog, I provide a sample of female hip-hop artists from throughout the world. Each artist has a distinct story and background that they share with the public, whether it’s through music or interviews. The list is inspired by a Hip-Hop Feminism course I took my first semester in the University of Illinois and I encourage the readers to take the leap to learn more about the artists listed below.

I remind you, this is not a comprehensive list, but rather a slight push to help you discover more about these women and hip-hop, motivate you to find other female hip-hop artists, and most importantly, support female MCs.

Algerian born, singer/songwriter/MC Meryem Saci is part of a multicultural hip-hop group called Nomadic Massive based in Montreal, Canada. She and her mother fled Algeria due to a civil war and immigrated to Montreal. Saci has not released an album, but she has worked with many international artists and is currently in the process of releasing her first solo project. She is also part of the multimedia agency ‘The Medium’ which includes a roster of other independent artists working together to produce an art form that is free from corporate influence. The following video is an interview with Meryem Saci, who talks about her journey from Algeria to Canada and her experience as a female artist.

Chilean-French singer/songwriter/MC Ana Tijoux first collaborated with a hip-hop group named Mazika. Afterwards, she went solo and was recognized for her single “1977”, which was also featured in the television series ‘Breaking Bad’. The messages in her albums are in Spanish and vary from love, politics, challenging patriarchal systems, birth, motherhood, and more. Tijoux has five albums, which includes her 2014 release ‘Vengo’ which is known for the singles “Vengo” and “Somos Sur.” The video below is a 30 minute interview from Democracy Now.

London-based, Jamaican-bred, Hip-Hop/spoken word duo ‘Poetic Pilgrimage’ have produced music for many years. Recently, they have been recognized by social media and news outlets such as Al Arabiya, Al Jazeera, HipHopDX, Huffington Post, and many more. As a hip-hop group, Munira Rashida and Sukina Abdul Noor identify as Muslim, and have been working to show the public the similarities shared between their Islamic faith, cultural and ethnic background, and hip-hop culture. Poetic Pilgrimage have released ‘Star Women: The Mixtape’ followed by their 21 track mixtape ‘Star Women,’ including other singles and spoken word releases. The following link is from Aljazeera’s program The Stream that interviews Poetic Pilgrimage, welcomes other Muslim artists, and encourages the public to use social media to become a part of the discussion.

“The Stream – Poetic Pilgrimage rappers strike a chord with Islam”

British-Palestinian artist Shadia Mansour, the “First Lady of Arabic Hip-Hop,” is well-known for her outspoken demeanor and politically charged lyrics. Her songs deal with issues of the oppression and discrimination experienced by underrepresented communities, especially Arabs. She has traveled to Latin America, and has also worked with the non-profit organization ‘Existence is Resistance’ to work and perform with other hip-hop artists and youth in Palestine. Mansour has yet to release an album, but has many singles under her belt, including her most recent track “El Kofeyye Arabeyye” (the Arabic Kufiyyeh).  The video below is a short interview of Shadia Mansour by the United Kingdom’s Foreign & Commonwealth Office.

Filipino-American journalist/instructor/activist/hip-hop artist Rocky Rivera has written articles for magazines such as Rolling Stone and The Source, to name a few. She is the first woman in the record label BeatRock Music and is a feminist gangster MC, just check out her discography and music videos. The last album she released was ‘Gangster of Love’ and a free mixtape ‘Rock & Roz Present Rose Gold.’ The following video is an interview by radio show host Miss Special, who interviews Rocky Rivera about her career from journalist to independent hip-hop artist and involvement in her local community.

Soosan Firooz is an Afghani actress hip-hop artist who fled Afghanistan with her family from the Taliban. She lived as a refugee in Iran and Pakistan, and has returned to her home in Afghanistan where she raps about the oppression of Afghan women. Firooz is “Afghanistan’s first female rapper”, but Firooz’s publicity has led to death threats and rejection from some family members. However, she continues to make music with the support of her father and with the conviction to change society and continue to provide for her family. The following video gives the viewer a brief look at Firooz’s life in Afghanistan and the struggles she has to endure being a female artist and a provider for her family.

Egyptian born Mayam Mahmoud took the public by surprise when she appeared in an American-inspired show, Arabs Got Talent, veiled and rapping on the microphone. A young woman in her early 20s, Ms. Mahmoud has taken it upon herself to rap with a purpose and convey a positive message as counterargument to commercial hip-hop and its debasing lyrics towards women. At a time when the Middle East, especially Egypt, continues to undergo social and political changes, Ms. Mahmoud’s public appearance and perseverance is a sign of her hope to transform misconceptions of women artists and raise awareness of injustices against women.

If you are ready to take the next step, I encourage you to continue your search by visiting the following sites in order to discover more international female MCs:

The following link provides a list of 500+ female hip-hop artists compiled by a person of many hats, Davey D: journalist, adjunct professor, hip-hop historian, talk show host, radio programmer, producer, dee jay, media and community activist. Some links do not work, but do not be discouraged, there are many more artists to discover.

Nomadic Wax, is an event production company specializing in international hip-hop. The company recently released a free mixtape ‘World Hip Hop Women SoundSIStem Mixtape hosted by DJ Lajedi.’ The project includes 19 transnational MCs, and you can learn more about them by clicking on the following link:

The last article is a collection of Latin American female hip-hop artists. Although it is a small sample, the featured artists push borders and challenge the stereotypical image of Hispanic women endorsed by corporate media and hip-hop:

Five Women That Are New Voices In Latino Hip-Hop

Finally, the International Area and Studies Library has acquired a new book on international hip-hop that you can check out from our collection of circulating books: