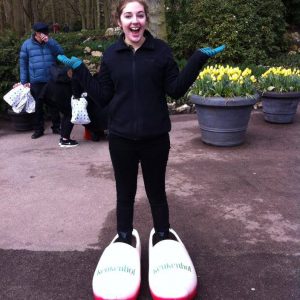 Me standing in wooden shoes at the Keukenhof, a flower park in the Netherlands, March 2015.

Learning a new language can be motivated by many factors and developed in different environments. While I have taken language courses in classroom settings, my most recent foray into a new language has been less structured, and more personal.

In April 2015, I visited the Netherlands at the end of a semester abroad in England. Much of my mother’s extended family still lives in the Netherlands, and she and I spent about five days meeting relatives and exploring areas like Amsterdam, Heerhugowaard, Volendam, and The Hague. 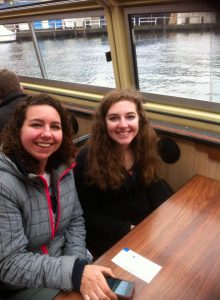 My relative and I took a canal boat tour in Amsterdam, March 2015.

While not universal, we were surprised by how many Dutch people spoke English, and spoke it well. Our family explained that English language is a required subject for most students, beginning at a young age. The proliferation of English media also helps them to learn not only the formal English of the classroom, but also the common phrases and expressions used in everyday conversation. My mother and I do not speak Dutch, so we relied heavily on our family when traveling, shopping, and communicating in general. The language barrier was not a significant challenge on our trip, however, as so many of the people we interacted with could speak at least some level of English, and many written texts were also available in English as well. 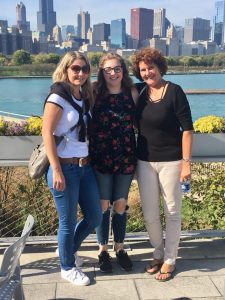 In October this year, a few of these relatives had the opportunity to visit America for several weeks. They spent a weekend with my immediate family in Illinois before visiting other cousins in Indiana and then flying to Tampa, Florida, where a mini-reunion took place. My mother and I took them to Chicago for several days to see the city sights: the Shedd Aquarium, Millenium Park, Michigan Avenue, Chicago 360, and an architectural boat tour. While my mother and I still acted as guides, they could have functioned independently due to their fluency in English; they were able to read parking machines, store signs, menus, and ticket information on their own. Their language abilities afforded them comfort and agency even in a new place, and it allowed them to interact fully with their environment without needing much help outside help.

They later told me that they were not only fluent in English, but also had working knowledge in German, French, and Spanish as well. While this kind of language variety is impressive, it is not uncommon for the world at large. A European Commission report from 2012 found that 77% of people in the Netherlands have practical skills in at least two foreign languages (p. 13), and English is the foreign language most Europeans are able to speak at 38% (p. 19). In other regions of the world, such as those in Asia, Africa, India, and the Middle East, it can be common to speak or learn more than one language. These additional languages are not always taught exclusively in a classroom environment – as is common in English-speaking countries – but instead learned more organically through exposure and everyday use.

A Pew Research Center article from 2015 details that only 25% of American adults reported speaking a language other than English in a 2006 survey, and only 43% of this group said they could speak the language very well. While these numbers may be changing, and these statistics are never exact, it is clear that Americans spend less time and effort learning foreign languages. A 2015 article from The Atlantic quoted Richard Brecht, head of the University of Maryland’s Center for Advanced Study of Language, as saying, “It isn’t that people don’t think language education is important. It’s that they don’t think it’s possible.”

Language learning, especially later in life, is not easy. I studied Spanish in high school and Latin in undergrad, but I retain almost no functional or conversational skills in these languages. However, many online resources make language learning possible – and fun – after people have left the formal classroom environment. I am currently using Duolingo – an interactive phone app – to learn Dutch, in the hopes of one day being able to speak to my relatives in their native language.

If you are interested in learning a foreign language, there are many resources that are available to you, whether you are at the University of Illinois at Urbana-Champaign or not:

Rosetta Stone – for University of Illinois students and faculty, look under Quick Links on the Literatures and Languages Library homepage and login with your netID and password

Ethnologue – This is not a language-learning tool, but it includes updated statistics about languages worldwide. Use a University of Illinois netID and password to log in.

Devlin, K. (2015, July 13). Learning a foreign language a ‘must’ in Europe, not so in America. Pew Research Center. Retrieved from http://www.pewresearch.org/fact-tank/2015/07/13/learning-a-foreign-language-a-must-in-europe-not-so-in-america/.

Friedman, A. (2015, May 10). America’s lacking language skills. The Atlantic. Retrieved from https://www.theatlantic.com/education/archive/2015/05/filling-americas-language-education-potholes/392876/.