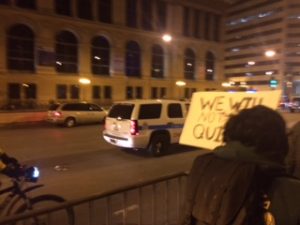 Regardless of political affiliation, the recent elections in the United States have left many educators and librarians wondering how to make sense of what appears to be a dramatic political shift that impacts both our ideas of knowledge and notions of tolerance, multiculturalism, and global perspectives. This is not the first time we’ve experienced this kind of societal challenge, and a historical perspective may provide guidance regarding the challenges educators, librarians, and funding agencies that focus on fostering global and intercultural perspectives may face.

In a recent op-ed piece, Benjamin Soskis, historian of philanthropy at the Center for Nonprofit Management, Philanthropy and Policy at George Mason University, addresses how philanthropists and foundations might need to adjust to changes in the political landscape and respond to apparent lapses in support for both rural populations and others disconnected from the global economy[i].  Soskis’ analysis pointedly looks back to the challenges and activities of 20th Century philanthropy programs that broadly addressed educational issues in the US.  Soskis also alludes to the need to support dialogue and understanding that counters worldviews focused narrowly on ethnic nationalism and skepticism of international entanglements.

Soskis’ look back at the 20th Century is prescient in the observation of a focus on the educational needs of rural Americans but also in pointing to political parallels to what the United States and world may be facing.  Edward Kolodziej, Emeritus Professor of Political Science at the University of Illinois, recently noted in a lecture on global governance that global politics may be moving back to a model last seen in the 1920’s.[ii]

How did some educators and librarians address these problems during this era? 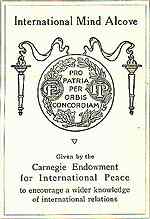 The International Mind Alcove program’s history reveals an often complicated and controversial relationship between the State, education movements, society, and funding agencies. Just as current debates focus on the authority of knowledge and the confusing distribution of propaganda and false news through social networking platforms, early and mid 20th Century information dissemination generated debate about the value and power of knowledge in the public sphere.  These debates often played out in public libraries around the selection of books. For example, in Harlingen, Texas, it was reported that the  Public Library board debated the need for “more books on Americanism” as a way to “combat the spread of communism” in an article that also noted “an interesting report on the popularity of the International Mind Alcove collection”.[vii]

The role of knowledge and media in the juxtaposition of Americanism and internationalism also featured heavily on Capitol Hill.  In a series of Congressional speeches Massachusetts Representative George Tinkham, who was skeptical of internationalism, warned that “the manipulation of public opinion from sources which do not represent the general public will become the poisoned cup from which the American Republic will perish.”  Tinkham called for “a congressional investigation of the propaganda methods of the CIEP and its allies [to] . . . insure preservation of American independence and American neutrality”.[viii]  By the early 1950’s, these educational programs were again under fire. Through House Resolution 561, the 82nd US Congress investigated whether or not tax-exempt foundations were misusing their funds to support activities that countered national interests. The committees were charged with conducting a “full and complete investigation and study of educational and philanthropic foundations and other comparable organizations which are exempt from Federal income taxation to determine if any foundations and organizations are using their resources for purposes other than the purposes for which they were established, and especially to determine which such foundations and organizations are using their resources for un-American and subversive activities; for political purposes; propaganda or attempts to influence legislation”.[ix]  The Chicago Daily Tribune, which had long been critical of internationalist programs, editorialized that “huge foundations in the country have been diverted into propaganda for globalism”.[x] On the other hand, the New York Times, editorialized on the “dangers to freedom of scholarship, research and thought that lie half-hidden between the lines” of the committee’s investigation.[xi]

There is a clear historical connection between the continued debate between worldviews and the pendulum may be swinging once again toward ethnic nationalism and isolationism.  It is also apparent that educators and librarians continue to play a key role in helping communities navigate differences in worldviews amidst a media environment that inspires distrust in knowledge and the existence of multitruths. What lies ahead is unknown.  It is clear, however, that our work to provide opportunities for cultural engagement and to promote a critical understanding of the media and knowledge production are as important now as a century ago.