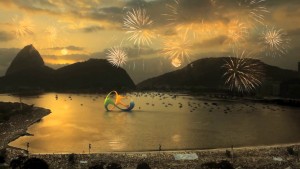 With the wintry weather starting to fade here in Illinois – we hope! –  the 2016 Summer Olympic Games feel like they’re just around the corner. The Olympics will take place from August 5th to August 21st, 2016 in Rio de Janeiro, Brazil.

Much has been said, debated, and certainly achieved in relation to the preparation for the 2016 Summer Olympics. Just over a year ago, we took a look at the situation on this blog and with this post, Part 2, we hope to check back in with the progress.

For starters, I invite you to keep in mind what our Latin American and Caribbean Studies Librarian, Antonio Sotomayor, has said about the connection between sports and politics when interviewed about his recent book on Puerto Rico’s participation in past Olympic Games: “Sports is never done in a vacuum.”

The first thing to consider, then, is that neither sports nor public opinion – and even less so public opinion represented in the media – are interest-free enterprises. With this thought in mind, let’s go through some of the most visible updates regarding the upcoming 2016 Olympiad. 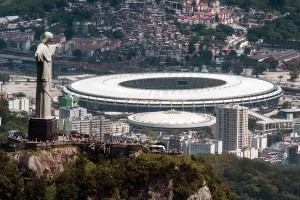 Since the announcement of Rio de Janeiro as the host city of the 2016 Games back in 2009, diverse reactions have been expressed in the sphere of public opinion. What’s more, after the simultaneously successful and controversial FIFA World Cup held in Brazil in 2014, the expectations appear to be both more achievable and more ambitious.

Public spending for these two sporting mega-events – as these kinds of massive, international, and commercial competitions are called – is a  great topic of debate. The unease of some towards these monumental events is related, in part, to the feeling that not all profits will stay in Brazil. Although local businesses and tourism may also benefit from the large number of visitors traveling to Brazil for the Olympics, criticism remains about public expenditures and the limited redistribution of profits made by private corporations. Impact evaluations of the 2014 World Cup have already been conducted and proved that the positive effect of this event on the country’s gross domestic product (GDP) has been minimal. In fact, some say that these mega-events, while indeed entertaining for the masses, tend to be “zero sum games.”  Besides public investments, building infrastructure, and “embellishing” cities, impoverished populations have been displaced for the construction of venues and public spaces. Some even claim that “social cleansing” has taken place, as reported in a 2016 article by Al Jazeera.

Water pollution and the explosion of mosquito-generated diseases are other great challenges that Brazilian organizers are currently facing. The cleaning of Rio’s Guanabara Bay, which will host the sailing competitions at the Olympics, was a main promise made by the city upon its announcement as host but does not appear to have been brought to fruition. Major news outlets in the United States (as seen in the New York Times, ThinkProgress, and the New Yorker) and the U.K. (the Guardian) argue that Guanabara Bay in Rio is still highly polluted with bacteria and solid waste, which would pose major risks to athletes’ health and interfere with the development of sailing competitions. To add to this large list of challenges, you have probably heard about the Zika virus, a mosquito-transmitted disease that has seen a major outbreak in the past few months. The disease has already proved to affect the health of unborn babies when acquired by pregnant women, contributing, most likely, to a highly debilitating condition known as microcephaly. Along with Zika, the diseases chikungunya and dengue are some of the other uninvited guests currently in Brazil.

Although all of this looks like a very dark picture for a successful Olympics in terms of event organization and economic and political benefits for the region, other more positive positions have been taken on the matter. For starters, Rio 2016 is the first Olympiad celebrated in South America and only the second in Latin America (the first was Mexico 1968). And, if for some portion of Brazilians the Olympics are a public expenditure that is not a priority – or even necessary – and that also involves questionable political actions, for others it is an issue of pride and of the global positioning that Brazil has recently gained as a rising world economy. In September 2015, the Argentinian press published an article revealing that 73% of Brazilian citizens support the Olympics.

What are other countries saying about the Olympics? Media outlets from Argentina, Chile, Colombia, and even France seem somewhat less skeptical about Rio’s potential success. Among the Brazilian press and other international outlets that publish in Brazil (BBC Brazil, for example), many articles have been published which, while expressing awareness about the huge challenge that a mega-even like the Olympics constitutes for the country’s economy and political decisions, seem to be more moderate about the possible scenarios than what is presented in other international media. BBC Brazil has published articles about how the Brazilian Committee is making do in the midst of the current Brazilian economic recession, as can be read in this piece from September 2015 and this one from October 2015. Likewise, Brazilian organizers have declared that the budget for the 2016 opening ceremony would be less than half of what was spent in London 2012, as reported by the Canadian Broadcasting Corporation (CBC).

Regarding fears about infrastructure, Rio de Janeiro’s daily newspaper O Globo published in its online edition a map of the current state of construction of the Olympic venues. This is the issue that has created the most panic among international public opinion. Rio’s mayor, Eduardo Paes, has also been responding to criticism and skepticism by answering as many questions as possible, as reported here in the Guardian from August 2015.

Regarding Zika, the International Olympic Committee President, Thomas Bach, has stated that he is fully confident that the Zika outbreak will be controlled appropriately and that it will not interfere in the development of the Olympiad. In this statement he supports Dilma Rousseff’s declarations assuring the international community and athletes that Zika will not present a major threat this summer. 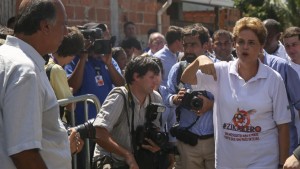 Amidst all of these conflicting opinions and complex challenges, both Rio de Janeiro’s and Brazil’s governments have decided to push back and continue working towards being a great host for the summer Olympics. Although August is still several months away, Rio is already inaugurating new venues and hosting pre-Olympic events to test and fine-tune these new venues. From early February through May 22, events will take place with around 272 athletes from 49 countries.

As we can see, the Olympics are much more than fun, fitness, discipline, competition, and entertainment. Business and hardcore politics are also embedded in the Games’ roots, both as a competition and as an international committee.

But at this point we must ask ourselves some tough questions: Are we more concerned with the venues being ready than with the displaced families that the venues have created? Do we see in the risk of Zika for tourists and athletes a larger overall threat than the alleged “social cleansing” taking place in order to have a more sightly Rio for the Olympics? How is Zika related to other world-wide environmental phenomena? Are the economic investments in building new venues and for the opening ceremony reasonable choices or a waste of money?

If you ask me, I would say that on one hand, the panic over the organization of the Rio Olympics may be based on the fact that the process has not been as smooth as the international community is used to – for example, when the games are celebrated in richer countries. So, perhaps this is a good opportunity to revise what we think of as “world-class” standards and comparisons and to accept that sometimes spending billions of dollars on new sporting venues is less than reasonable. Furthermore, perhaps we should think twice before feeling disappointed about relatively “modest” opening ceremonies.

On the other hand, it is also important that we keep in mind questions about how international corporations and organizations such as the International Olympic Committee and FIFA may impose their interests above those of host countries in regards to the distribution of profits. This is why Avery Brundage, former IOC president, took a very strong stance on the Olympic movement ideally being about amateur as opposed to corporatized and politically sponsored sports. The University of Illinois Archives holds an extended collection of Brundage’s papers. There you can track his fight against the commercialization of sports and also discover the political moves embedded in the both the IOC and the sporting events themselves.

For even more information and insight, below is a selection of books available at the University Library that we have selected as part of the current exhibit on Rio 2016 at the Main Library. And here is a comprehensive LibGuide on Brazil, and a Libguide on Sports, that we have developed to support your research on these topics. Also: Don’t miss our Chai Wai on Rio 2016 on Tuesday, March 8th from 3 to 4:30pm at the International & Area Studies Library (321 Main Library). All are welcome! 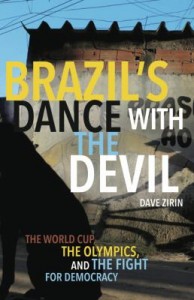 Cover of: Brazil’s dance with the devil : the World Cup, the Olympics, and the fight for democracy
(see below) 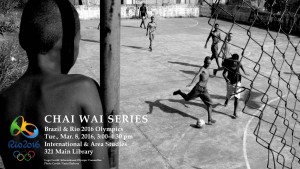