RSS feed for this section

Land Mines and Explosive Remnants of War: A Global Burden

By sbnagle2@illinois.edu on April 21, 2015 in Arms Control and Disarmament, History, Politics 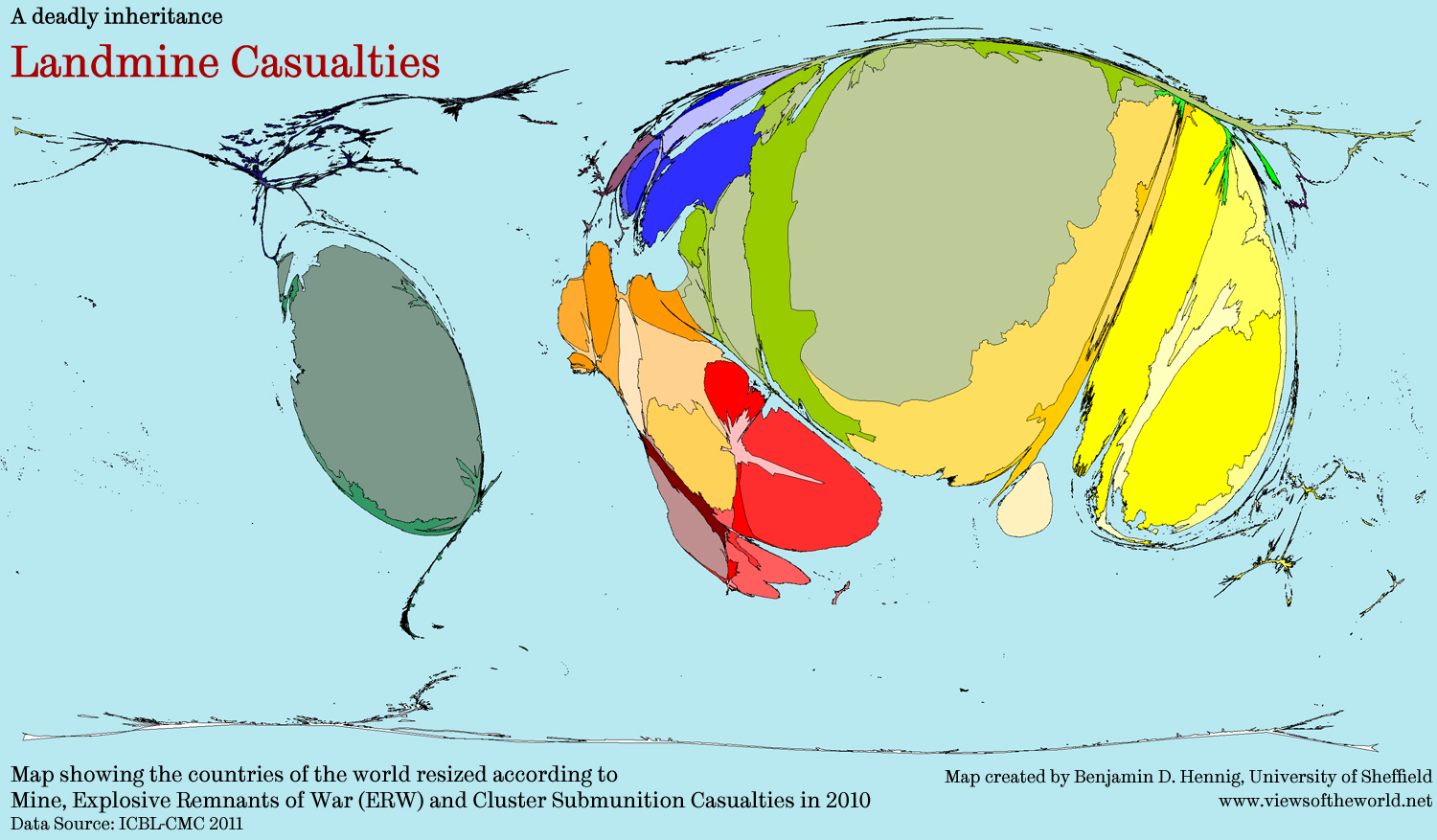 Saturday, April 4th was International Day for Mine Awareness and Assistance in Mine Action. Global Currents would like to take this opportunity to talk about the history of land mines and current issues and efforts surrounding mines and explosive hazards.

When wars end, often the death and destruction lingers for decades in the form of unexploded land mines and other types of explosives. The people living in affected areas must deal with the effects of these remnants of war, which still kill or injure around 11 people each day around the world, despite massive worldwide efforts since 1997 to eliminate them.  In addition to death and injury, the cost of medical care, resulting unemployment, and loss of usable land have detrimental effects on communities as well.

The Convention on the Prohibition of the Use, Stockpiling, Production and Transfer of Anti-Personnel Mines and on Their Destruction, also known as the Ottawa Treaty, was adopted by the UN in 1997, and currently has 162 signatories. 35 United Nations States are not-party to the treaty, including the United States, Russia, and China. Terms of the treaty for signatories includes destruction of land mine stockpiles (except for a small number for training purposes), clearing of all land mine areas within the country within ten years of signing, and assistance to persons affected by land mines. The Ottawa Treaty does not include any provisions for cluster munitions, however, which can pose many of the same civilian risks as land mines.  The Convention on Cluster Munitions , as a result, was adopted in 2008 and is currently signed by 116 countries. This convention is similar to the Ottawa Treaty in its obligations – destruction of stockpiles, clearing of areas, and assistance to victims.

The United Nations Mine Action Service (UNMAS) is the branch of the United Nations dedicated to addressing the problem of land mines and explosive hazards. The organization works in 40 countries and three territories on different aspects of mine action, depending on the area’s need. NGOs such as the The Marshal Legacy Institute, The Halo Trust, and the Landmine Relief Fund, cover a range of actions from demining efforts to public awareness to assistance for victims.

The latest reports show that progress is being made in eliminating the threat of land mines and cluster munitions to civilians, but policy and practice need to continue to move towards what ICBLM calls the “international norm against use – where use anywhere by anyone is considered abhorrent.” But integrally important to the effort to reduce the threat of these deadly devices is the raising of awareness around the globe. That is the goal of events such as International Day for Mine Awareness and Assistance in Mine Action, because the more people that see and are appalled by the statistics, the stronger the pressure will be on governments worldwide to fix the problem.

To find out more about land mine action, please consult the resources below!

Kirk, R. W. (2014). In Dogs We Trust? Intersubjectivity, Response-Able Relations, and the Making of Mine Detector Dogs. Journal Of The History Of The Behavioral Sciences, 50(1), 1-36.

Borrie, John. (2009). Unacceptable harm: a history of how the treaty to ban cluster munitions was won. New York : United Nations.