By Mia Adams on February 20, 2020 in Uncategorized 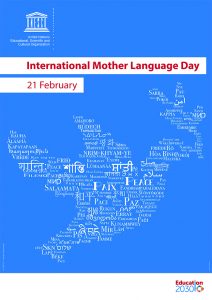 International Mother Language Day is observed on the 21st of February every year. This year’s theme is “Languages Without Borders”, and the United Nations seeks to spread the idea that “local, cross-border languages can promote peaceful dialogue and help to preserve indigenous heritage” (unesco.org).

International Mother Language Day was proclaimed at the General Conference of the United Nations Educational, Scientific and Cultural Organization (UNESCO) in 1999, and emphasizes the importance and diversity of spoken languages all around the world in hopes to promote linguistic and cultural diversity and encourage multilingualism. Nearly 43% of the world’s 6,000 languages are considered endangered today. This means 2,580 mother languages are at risk of being forgotten. Language Endangerment can happen for a variety of reasons, but the result is the same—when a language is lost, so is a group of people’s cultural and intellectual identity.

Language preservation is vital, as it preserves the historical and cultural heritage of a group of people, and in a world where globalization is influencing the languages people speak, lesser known languages are suffering. Non-western educational systems often chose to operate in western languages, leaving students to abandon the language they speak at home with their families and friends, and businesses that interact internationally largely utilize western languages too. By encouraging multilingualism, organizations like the United Nations are trying to create a mindset where it is socially acceptable to use a number of languages, including your western language of choice and your mother language, inspiring individuals to choose to learn new languages while maintaining the ones they already speak. Join in celebrating International Mother Language Day today and everyday by recognizing the many languages other people speak, encouraging multilingualism, and maybe even learning a new language!

To see a complete list of scheduled events, look here.