According to BBC News, North Korea has begun firing short-range missiles again, despite Kim Jong-un’s statement last year that he would stop nuclear testing and cease launching intercontinental ballistic missiles. Over the last week, the South Korean military has issued a notice that North Korea has fired two short-range missiles in two separate weapons tests. The missiles were fired from Kusong North Korea (156km from Pyongyang), reached an altitude of 50km, and then flew into the sea. This is the first missile test to take place in North Korea since November 2017. 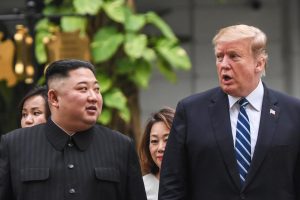 February of this year (2019). The meeting was scheduled in hopes that Trump and Kim would establish a truce where North Korea would give up its nuclear program. But these hopes failed when Trump refused to lift the sanctions put into place by the United States in the 1950s.

The summer before, Trump and Kim met in Singapore, and Kim agreed to work towards the denuclearization of Korea. But the meeting in Vietnam this year disbanded any ideas of truce. Since the summit with President Trump this year, Kim has also begun meetings with Vladimir Putin. But despite his sporadic and unpredictable actions, analysts such as Jonathan Marcus, Defense Correspondent, believe Kim’s threat of nuclear war are simply that — a threat — and are only in place to guarantee the survival of his regime. 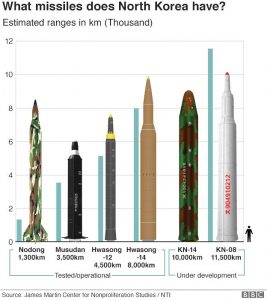 Analysts say Kim Jong-un has been trying to pressure the United States after the Trump meeting in Vietnam failed to bring together an agreement and a peace treaty, and with Seoul South Korea as the target, this new stream of tests aims towards showing Americans that Kim Jong-un is an intolerant and volatile man, and is quickly losing patience in the game.

Because the testing of intercontinental range systems would breach the agreement North Korea has with the United States, Pyongyang is demonstrating their short-range ballistic missile range as a kind of threat. But this agreement only lasts until the end of 2019. After that, who knows? North Korea has made claims that they have developed both ballistic missiles that could reach the U.S., and a small nuclear bomb that can fit on a long-range missile. 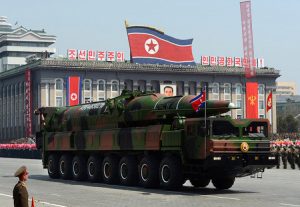 Some background: Born in 1983, Kim Jong-un, the current leader of North Korea is the grandson of Kim Il-sung, the first leader of North Korea. Kim is thought to have attended Liebefeld-Steinholzli public school in Koniz, Switzerland during the late 1990s. He was described by his classmates as a shy boy who cared not for politics, but was obsessed with American Basketball. He was often found to be sketching portraits of famous players like Michael Jordan, Kobe Bryant, and Toni Kukoc. Kim attended his grandfather’s university, Kim Il-sung Military University and received a physics degree, in addition to becoming an army officer.

Despite being the second child of Kim Jong-il and Ko Yong-hui, Kim Jong-un was named heir apparent and became the “Supreme Leader” of North Korea in 2011 after the death of his father. Kim Jong-un’s older brother Kim Jong-nam was intended to be the next ruler of North Korea after his father. However, he allegedly fell out of favor in 2001 when he tried to visit Tokyo Disneyland with a fake passport. Jong-nam was killed in Malaysia in 2017, poisoned by two East Asian women. For many years following his death, suspicions revolved around the involvement of North Korean agents employed by the Kim family. However, other significant news has surfaced recently suggesting Jong-nam was an informant for the Central Intelligence Agency (CIA) and would travel to Malaysia to meet with agents. It is still being debated whether or not he was discovered to be working with the CIA in 2017, and whether or not this played a role in his death.

Kim became Chairman of the Workers’ Party of Korea in 2012, and holds the titles of Chairman of the Central Military Commission, Chairman of the State Affairs Commission, and Supreme Commander of the Armed Forces of the Democratic People’s Republic of Korea. Kim Jong-un ordered the execution of his uncle on 2013, and is rumored to have also issued an execution for his half-brother in 2017. Many countries consider him to be dictatorial and power-hungry, even though East Asian politicians argue he cares for his people more than his father or grandfather did.

The program in Arms Control & Domestic and International Security here at the University of Illinois Urbana-Champaign conducted a four part series titled “The Korean Peninsula in Crisis?” To find more information on this event and watch segments from each section, you can go here.

“North Korea’s Latest Missile Tests Don’t Break Any Deals with Trump, Because There is No Deal” https://www.washingtonpost.com/world/2019/05/09/north-koreas-latest-missile-tests-dont-break-any-deals-with-trump-because-there-is-no-deal/?utm_term=.76f36be12a16

“North Korea’s New Missile has Russian Fingerprints ‘All Over’ It” https://www.nbcnews.com/news/world/north-korea-s-new-missile-has-russian-fingerprints-all-over-n1004151