MillerComm2019: “Facts, Objects, and Visions in the Design of Globalizing Knowledge”

By Mia Adams on December 4, 2018 in Uncategorized

On October 24th approximately 100 individuals came to see Dr. Michael Kennedy, Professor of Sociology and International and Public Affairs at Brown University, deliver his keynote address at the Center for Advanced Study’s MillerComm 2019 event. In a speech titled “Facts, Objects, and Visons in the Design of Globalizing Knowledge” Kennedy outlined the nature of various global conversations he has been involved in since the 2015 publication of his book Globalizing Knowledge. The conversation consisted of radically different scopes of imagination, principles of design, and visions of consequence in the articulation of transformative knowledge cultures. The three different visions that were explored in his presentation related to:

Kennedy opened by acknowledging that access to knowledge and knowledge generation directly leads to representation of ideas and research questions, and he prefaced that his talk would bring many issues together through his expertise and experience as a scholar and an administrator. Kennedy was the University of Michigan’s first vice provost for international affairs, he has been the director of an institute and five centers and programs at Michigan, and he has served as the Howard R. Swearer Director of Brown University’s Watson Institute for International Studies.  Kennedy concluded nine years of service on the Executive Committee and Board of Directors at the Social Science Research Council in 2015, and now serves on the Governing Board of European Humanities University and as chair of the Advisory Board of the Open Society Foundations’ Higher Education Support Program.

After Kennedy read the Land Acknowledgment Statement (https://chancellor.illinois.edu/land_acknowledgement.html), he noted it was difficult to summarize what his book Globalizing Knowledge had been about, despite having talked about it in many locales. He said that his book had been an attempt, in part, to think about how we, as scholars, interpret intellectual responsibility, as well as how we perceive the institutional responsibility of the homes of which we are a part. Kennedy suggested we should think about what those intellectual responsibilities should be. Most discussions of globalization have a flat meaning, or a post-colonial flavor, but perhaps one question that can be asked in order to guide our understanding of the term is, “If you are suffering as an administrator, how can you make your life sufferable?”

Another question set the tone of the day’s talk: How does work in different sites inform one another? Kennedy began to answer this question by stating “we have no problem with our ability to rationalize, we have a problem with imagination”– referring to imagining the world that we want to inhabit.

The first imagination of a different world which Kennedy engaged with was the Oxford Martin Commission for Future Generations, a “group of 19 international leaders from government, business, academia, media and civil society who came together to address the growing short-term preoccupations of modern politics and business and identify ways of overcoming gridlock in key international negotiations” (https://www.oxfordmartin.ox.ac.uk/policy/commission/).  Since the publication of his book, Kennedy has been engaging in discussions with this group of individuals. This commission was chaired by Mr. Pascal Lamy, the former Director-General of the World Trade Organization.

The Oxford Commission in part was a process initiated to establish a common platform of understanding, as it was understood that the ability to address today’s global challenges is undermined by the absence of a collective vision for society. To remedy this, the commission urged a renewal  of dialogue based on an updated set of shared global values around which a unified and enduring pathway for society can be built. Kennedy mentioned that, within this framework, it is just a matter of who leads and to which networks, organizations, social groups and accompanying values they are tied, not in what method is used by that leadership to interpret the complexity of a rapidly changing world. Leadership is a matter of understanding global complexity and the meaning of progress.

Kennedy laid out a conceptual map of John Seely Brown and Ann Pendleton-Jullian’s work on a “Whitewater World” that states because of the rapid pace at which knowledge is being generated in today’s age, we require a different method of navigation — the metaphor employed being that of whitewater kayaking. 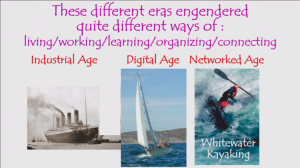 Invoking the use of kayaking as metaphor implies that we are ever-pragmatic in our decisions, meaning we are rapidly reacting to new sets of information that we are confronted with. Thus, Kennedy noted that universities need to think, not only about how to invest in the production of knowledge, but also how to elevate truthfulness to a higher status in our public life. This applies even more in relation to the new information ecosystem being created by the ever-increasing use of social media – especially twitter – by those who occupy elevated stations within political administrations.

Tegan (2012) notes that “AfroFuturism, like cyberfeminism, uses science fiction and cyberculture in a speculative manner, in the case of Afrofuturism to escape a definition of what it means to be black (or exotically African) in western culture” and is a way to “critique…both western culture and techno-culture” (p. 26). Most people are familiar with AfroFuturism through the example given to us by Marvel’s extremely successful Black Panther film released in early 2018. Kennedy noted that AfroFuturism is cutting edge and we need to engage with it, not only because of pop culture, but also so we can encourage our imaginations to wander towards something different than what already exists. Kennedy emphatically claimed “AfroFuturism is more profound than many world-building exercises”. 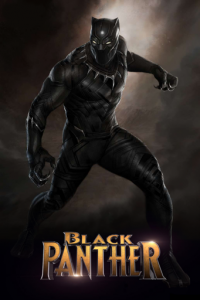 Figure 2: Black Panther may be the most popular example of AfroFuturism. Source: https://www.deviantart.com/tracedesign/art/Black-Panther-Cover-Art-500177251

Kennedy warmly called this part of his talk “comic-book sociology” but spoke in all seriousness when he reflected on his 2015 publication Globalizing Knowledge, and wondered if he had written the book on a “white canvas”. He speculated on how the book could have been different if conceived in more “Du Boisian terms” referencing, of course, well-known sociologist, historian, and civil rights activist W.E.B. Du Bois. Kennedy pondered, what if he had conceived the context of Globalizing Knowledge not as a globalizing university, but as white privilege composed on a white canvas much like the Incredible Hulk or even the Black Panther. What if blackness had been the guiding light? “What might I have seen beyond diversity?” Kennedy asked of himself.

Kennedy ended his talk by wondering what his project would have looked like if his most recent book had been conceived of with an AfroFuturist sensibility, not only influenced by Du Bois, Fanon, Cabra and Césaire, but also with Sun Ra, Octavia Butler, George Clinton and Audre Lorde.

Kennedy left the audience with this question about the future: “Is the Black Panther the beginning of a popular movement around AfroFuturist alternatives”?