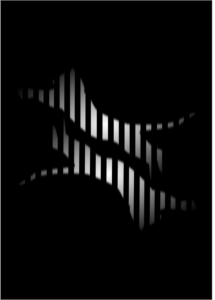 One of the most bizarre concepts of quantum physics is that of superposition – an entity can “be” in multiple states at once. And matter behaves as a wave, “existing” in many places at once. What Erwin Schrodinger once posed as a ludicrous consequence now has become the poster child of quantum physics – a cat being at once dead and alive. Here, inspired by these concepts, the artist takes a more benevolent, cheerful outlook in denoting a cat jumping up and down at once in the print.  The stripes were inspired by the double slit interference pattern when a light was shined through a double slit and diffract as waves do but at the same time, being the solid “cat” which represent the wave particle duality of light.
The four-sided lantern further illustrates a system in a superposition of four different ‘cat’ states. The pattern was inspired by the probability function of the electron of hydrogen atom in 1-0-0, 2-0-0, 3-0-0, 4-0-0.