The physical universe behaves in vastly different ways depending on scale. The laws that govern the microscopic, quantum world are fundamentally distinct from those that dictate the behavior of macroscopic objects: marbles, planets, stars, and even galaxies. Yet all changes in scale are continuous. This piece depicts the richness and abundance of connections between seemingly distinct areas of physics and their interplay with each other, and human beings as well. Ultimately, through a vibrant depiction of physical phenomena at all scales, and their mathematical descriptions, the artist seeks to depict the grander connection felt by human beings, and by all life, with the universe and its magnificence

When the subject of physics is brought to the public eye with the intention of making its fundamental concepts comprehensible, even to the most unfamiliar of people, its mathematical structure is almost never discussed. This is so often the case because of how foreign the mathematical ideas of physics are to those who haven’t had significant training or exposure. The artist’s motivation for this drawing was to express some of the most important equations in physics in an explicit and representational way. Because these equations describe a wealth of phenomena at different scales, the artist has attempted to integrate the sub-fields of physics into a singular body; namely, the entire subject of physics. Of course, this piece is not all-inclusive, there are numerous branches of physics which are not at all represented. 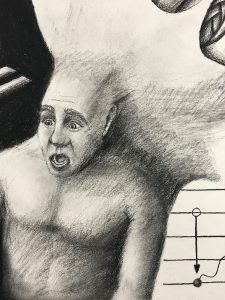 At the lower left corner, the artist has then assigned the lower left panel to represent the field of Quantum Mechanics, which describes the behavior of the universe at the smallest physical scales. In the realm of the Quantum Mechanics, matter particles exhibit wave-like behavior and follow principles which are wildly different from those that govern the universe at the macroscopic scale.

On the other end of axis, in the upper-right corner, the scale represented is that of the largest objects in the universe: Stars, Black Holes, Galaxies, etc. The physical theory used to describe objects at this scale was formulated by Albert Einstein, known as the 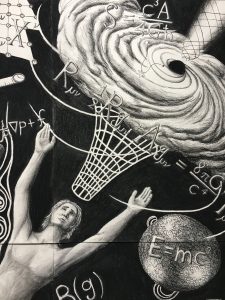 Theory of General Relativity. This theory has seen immense success, both among theorists and experimentalists, beautifully describing the warping of the space-time fabric in the presence of matter and energy. Still, the connection between Quantum Mechanics and General Relativity has eluded physicists since their conception. Using these fields as a basis, the artist draws connections between the fields of physics through scale, including fields such as Electromagnetism, Thermodynamics, Fluid Mechanics, and several more. 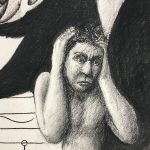 On the lower right, the human being looks to the concepts of entropy, thermodynamics and organic beings with overwhelming fear and confusion. 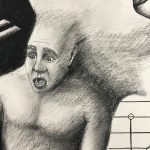 To their left is another human expressing utter astonishment toward the concepts of Quantum Mechanics and particle-wave duality. 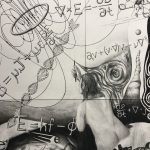 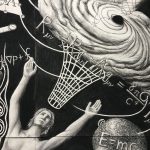 Electromagnetism and, to her right, is a figure expressing pure elation toward the grand and beautiful ideas of Einstein’s General Relativity. 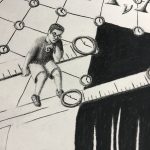 Situated in the top-center section, near the Lorentz Transformation of Special Relativity, a figure sits and makes a measurement regarding the spatial and temporal characteristics of a fast-moving object; his face is quizzically perplexed. 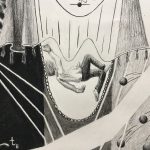 Just above the Principle of Least Action, a final figure falls downward under the effect of gravity; their hair covers their face, hiding any apparent expression. 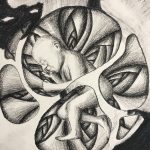 Finally, a child rests within the Earth at the center of the drawing. The artist intends to convey the intrinsic and meaningful connection humans share with the entire universe and to each other. Human life is fully contingent on the universal laws being as they are, and our history, as a developing species on the planet Earth, is rich and complex.

The artist began the construction of the piece by imagining an axis running diagonally from the lower left corner of the drawing to the upper right corner, representing changes in physical scale. Compositionally speaking, this scale-axis was the foundation for the diagonal movement of the drawing, intended to draw the eye dynamically across the piece.

From conception to finalization, the artist took roughly a month to finish this drawing. He claims that while the conceptual connections between the various fields of physics were difficult and required a great amount of thought, the visual/tonal connections between each region arose naturally. Once the tonal background of each panel had been chosen, his challenge was to represents each object with enough contrast to make each aspect of the drawing obvious and recognizable for the viewer. In the end, the artist was pleased with the composition of each panel and of the whole piece. Furthermore, he felt proud of the drawing’s rotation symmetry of black and white tones because it aided the diagonally guiding of the viewer’s eyes and made the entire piece rotationally dynamic, somewhat reminiscent, he claims, of a yin and yang.

Read about the equations used in this project.