You might have observed a stream meandering around a bend, or a trickle of viscous honey falling onto a piece of toast. You may have been mesmerized by a leaf or grain making its way along the flow, sometimes in nearly straight lines, sometimes undulating, sometimes swirling around in whirlpools. Fluid flow is intricate, rich, complex. Depending on how hard you push and how viscous the fluid, the flow could be smooth, steady, and laminar, or showing signs of instability, or thrust into a turbulent regime of roiling and vortices. 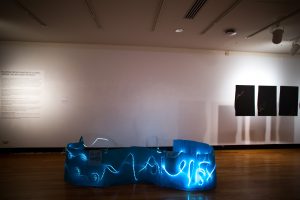 And fluid flow is universal. At the cosmic scale, gases swirl as fluids within galaxies, within stars and on the surface of planets. At the terrestrial scale, rivers descend powerfully from their mountainous sources, ever branching into tributaries and ultimately flowing into the sea. A rubber tree weeps latex from a cut made on its coarse bark. At the microscopic scale, quantum fluids undulate, dance, and harbor vortices. Fluids flow everywhere.

Please click on the images below to explore each exhibit.