(05/2020) Our work on Potentiometric Titration to identify Functional Group on Carbon is accepted! Good Work!

(1/15/2020) Dave selected to the List of Teachers Ranked as Excellent by graduate students of ChBE 551! Congrats! Good work!

(1/15/2020) Tom and Claudia selected to the List of Teachers Ranked as Excellent by students of ChBE 422 and ChBE 551 respectively! Congrats!

(1/10/2020) Our work on understanding the effects of phosphorus addition to Pd for selective dehydrogenation is accepted by Catalysis Science & Technology. Good work!

(11/03/2019) Our work on synthesizing metal-substituted FAU for selective oxidations is accepted by Catalysis Science & Technology. Great work, all!

(10/12/2019) Pranjali’s work on understanding the type of catalytically-active Pd for direct synthesis is accepted in AIChE Journal. Great work!

(09/26/2019) Megan may no longer be with us, but her spirit lives on with her latest JACS paper on identifying reaction intermediates within the “organometallic zoo.” Congrats!

(08/05/2019) Zeynep selected to the List of Teachers Ranked as Excellent by students for the undergraduate class ChBE 424! Congrats!

(08/03/2019) Daniel presents at the GRC on Nanoporous Materials and Their Applications. Good work!

(08/2019) Daniel is selected as one of the two graduate student presenters at the Gordon Research Conference on Nanoporous Materials and their Applications! Congrats!

(04/16/2018) The group goes to Chicago for the Catalysis Club of Chicago’s Annual Symposium! Pranjali, Daniel, Jason, Abinaya, Claudia, and Zeynep all give poster presentations, all were well-received!

(04/2019) Dave is appointed to the ACS Catalysis Early Career Advisory Board. Congratulations!

(12/28/2018) The group’s latest work on solvent effects on epoxidation within zeolites is accepted by JACS! Congrats all! 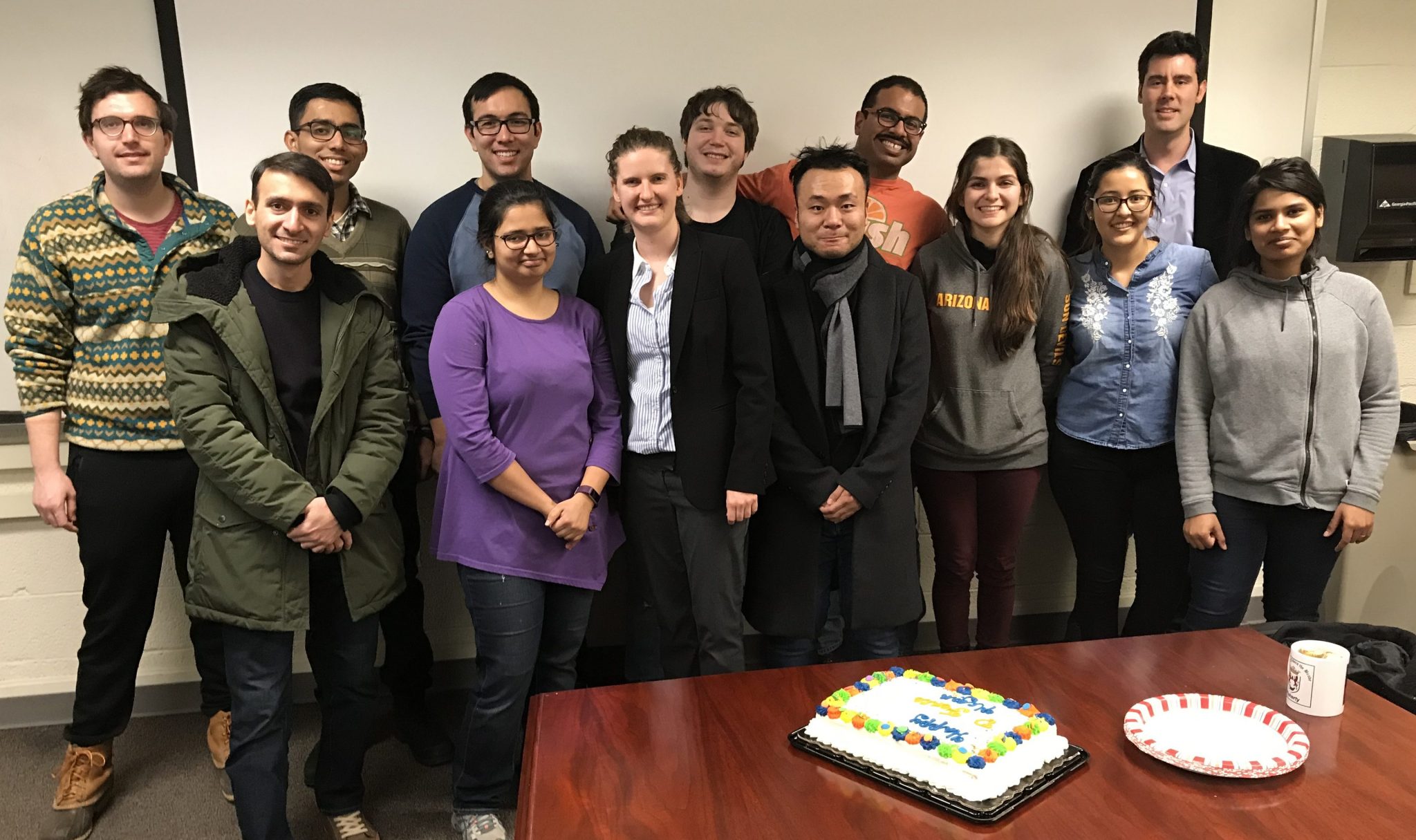 (12/07/2018) The group goes out for our annual Toys for Tots – Price is Right competition; team Megan, Jason, and Zeynep won! We then celebrated with a holiday dinner, good work all for a successful 2018 — looking forward to an even better 2019! 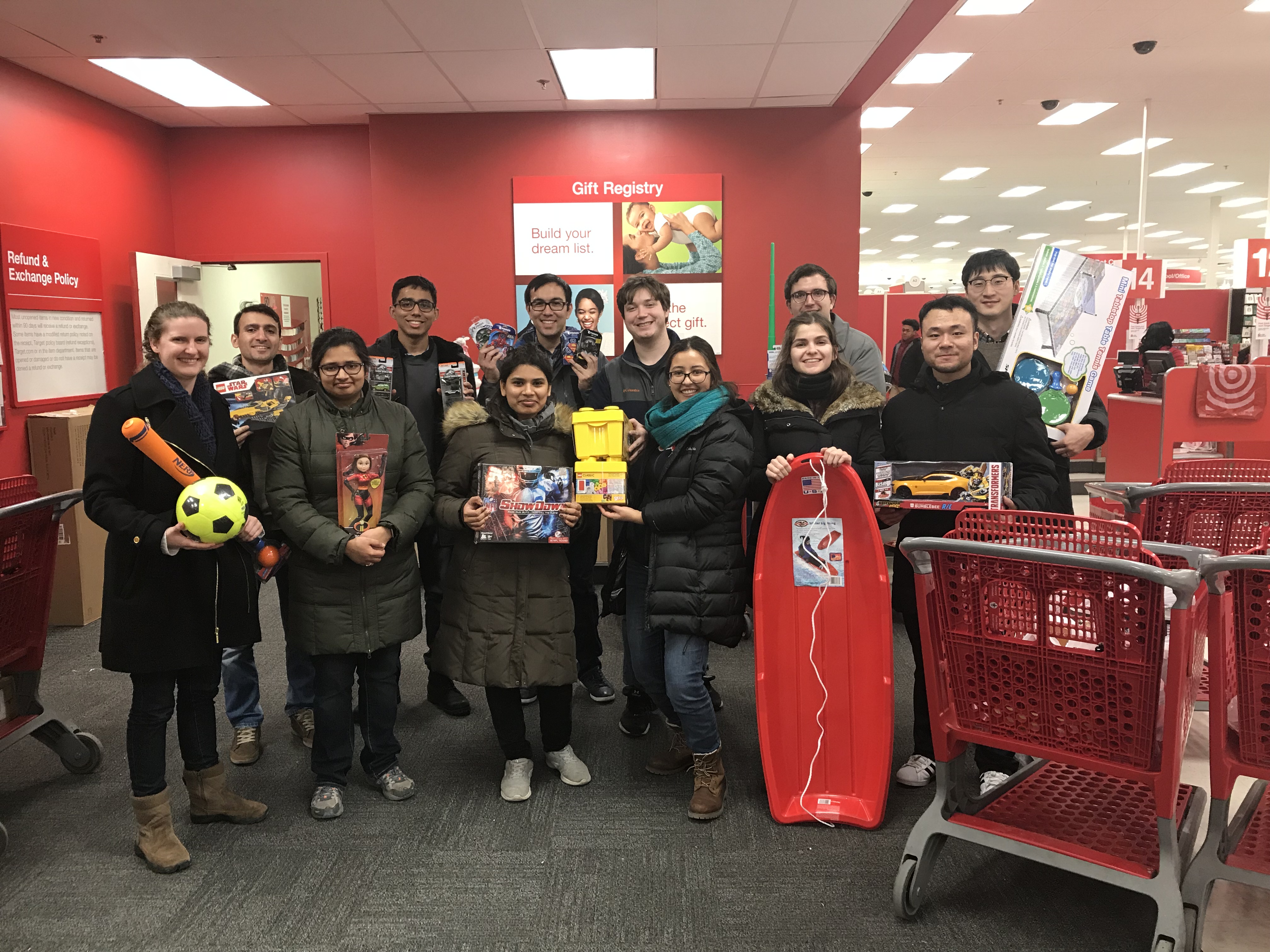 (11/2018) Pranjali and Daniel give awesome presentations at the 2018 annual AIChE meeting. Good job!

(10/12/2018) Jason receives third place in the poster presentation of the ChBE Symposium. Congrats!

(10/12/2018) Pranjali gives a talk, while Jason, Yao, and Abinaya give poster presentations at the ChBE symposium, all were well-received!

(09/06/2018) Dave is awarded the Early Career Award from the American Vacuum Society Prairie Chapter. Congrats, Dave; this is well deserved!

(07/11/2018) Dave and the group are featured in the latest edition of the Chemical and Biomolecular Engineering Department’s Newsletter, Mass Transfer!

(06/08/2018) Daniel, Ami, and Alayna’s work on catalytic thiophene oxidation was accepted by the Journal of Catalysis. Good work, team!

(05/30/2018) We welcome Chris Torres through the Summer Predoctoral Instutite and Rebecca and Gayatri through the Summer Research Opportunities Programs! All will be spending their summer with the Flaherty group working on clean oxidations or the direct synthesis of hydrogen peroxide. Welcome!

(05/11/2018) The group goes to Chicago for the Catalysis Club of Chicago’s Annual Symposium! Megan, Pranjali, Jason, Abinaya, Yao, Zeynep, and Arian all give poster presentations, while Daniel gives a talk, all were well-received! 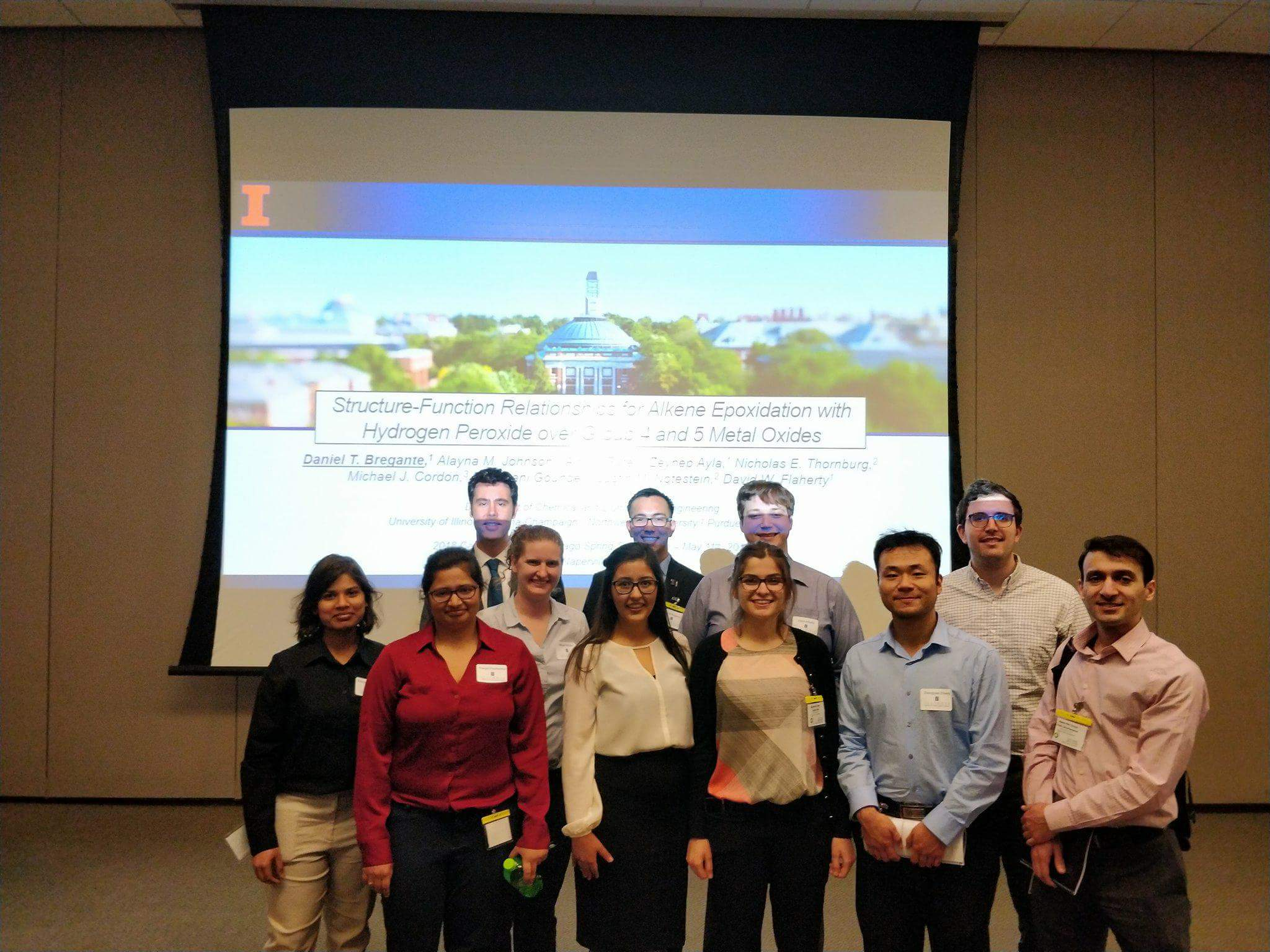 (03/2018) Gayatri and Rebecca join our group to work on Direct Synthesis and Green Oxidations, respectively. Welcome!

(03/05/2018) Our work on selective epoxidations was chosen as a cover article for ACS Catalysis. Congrats! 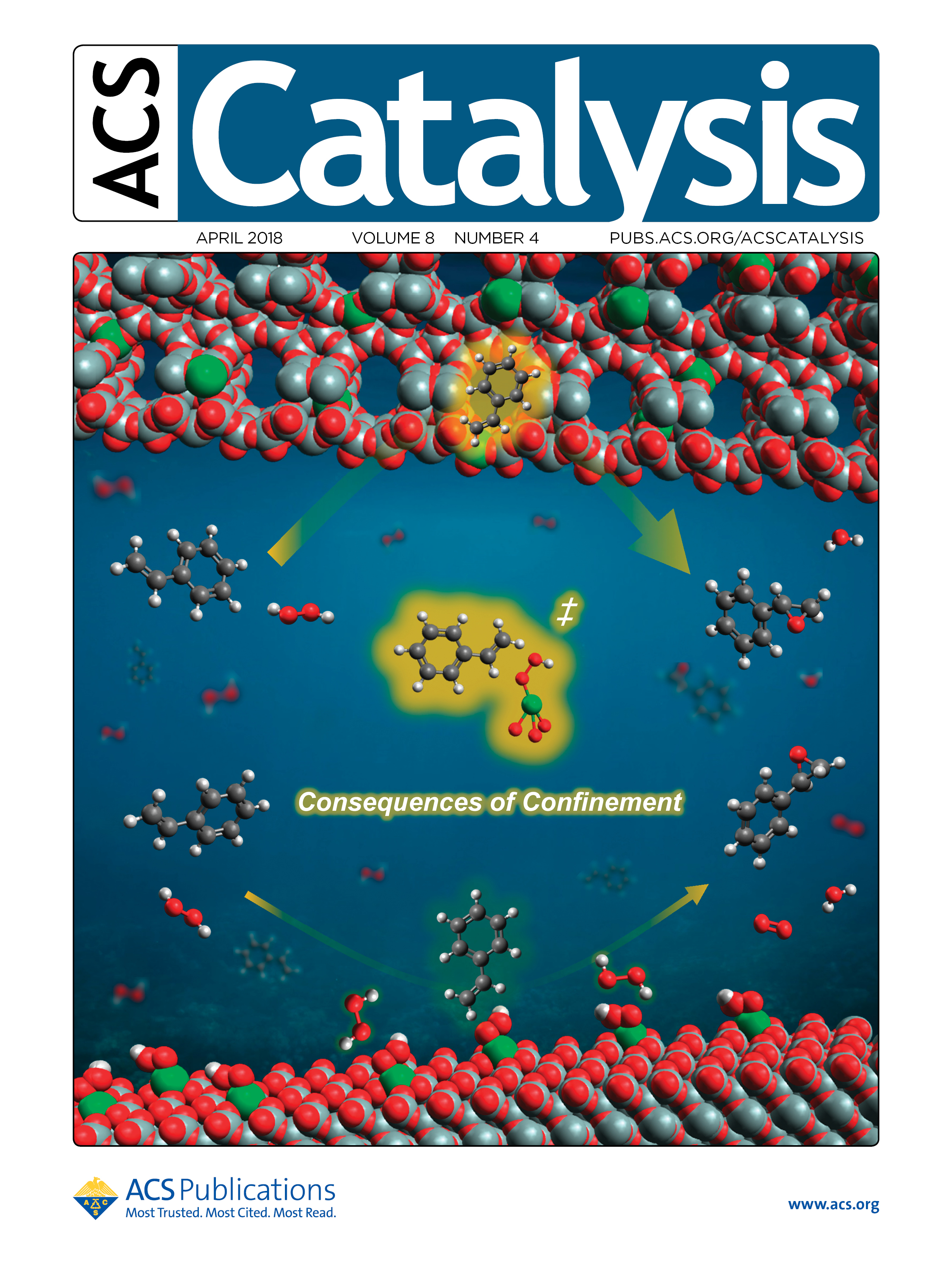 (02/27/2018) Neil’s and Hongbo’s papers on Direct Synthesis and Ethanol Upgrading at Accepted into ACS Catalysis and Journal of Catalysis, respectively! Congrats! Great day for the Flaherty group!

(02/15/2018) Daniel’s collaborative work with the Notestein group at NU on the consequences of confinement for alkene epoxidation is accepted into ACS Catalysis. Congrats!

(01/06/2018) Dave is named to the List of Teachers Ranked as Excellent by Their Students for teaching the undergraduate class ChBE 422, Mass Transfer Operations.

(01/06/2018) Daniel is named to the List of Teachers Ranked as Outstanding (top 10% of instructors) by Their Students for TA’ing the undergraduate class ChBE 422, Mass Transfer Operations.

(12/09/2017) The group went out to donate to Toys for Tots and, of course, made it a competition where Megan, Pranjali, Zeynep, and Hongbo won “Price is right”. We then celebrated with a Holiday Dinner! 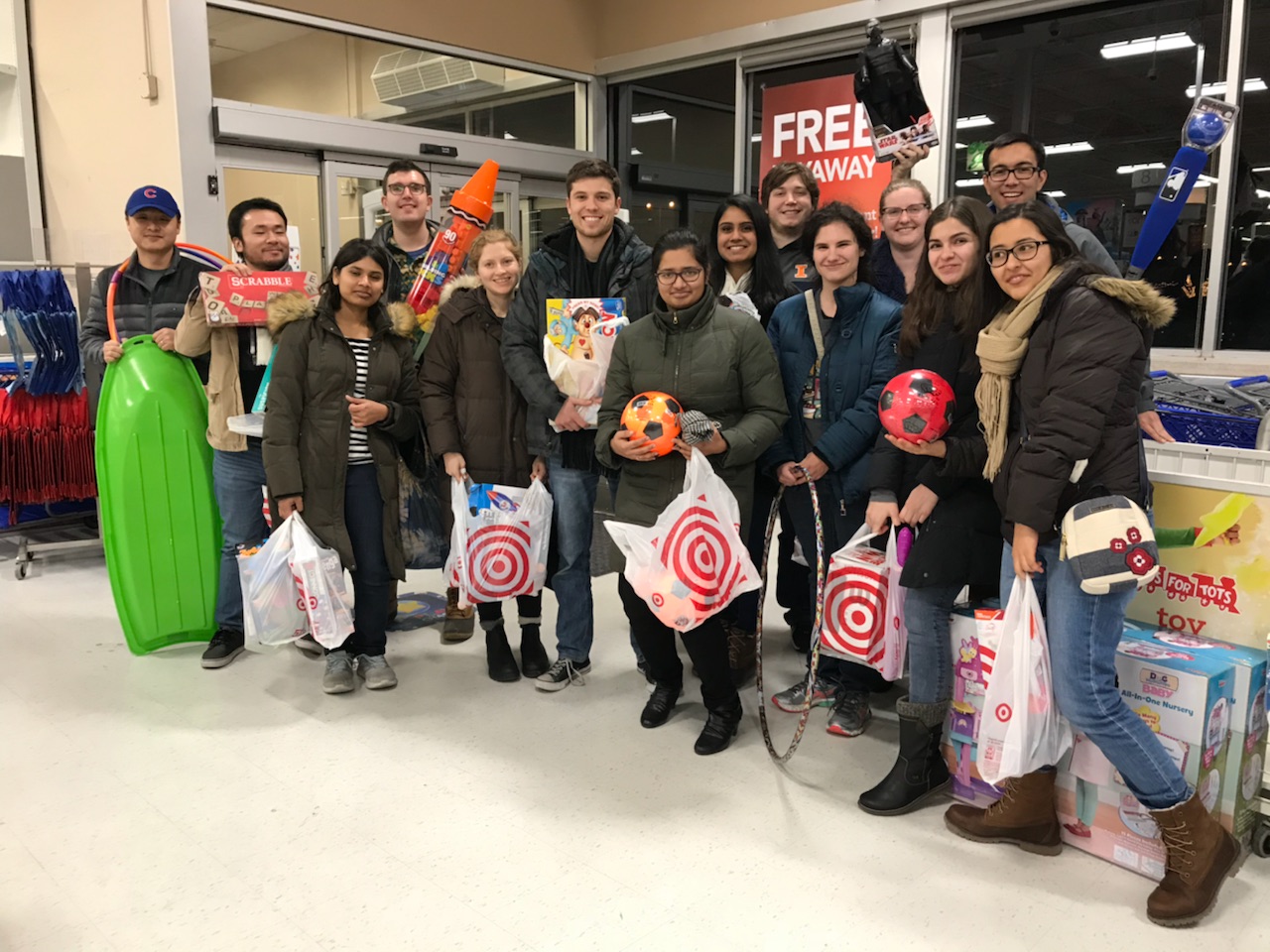 (12/04/2017) Neil successfully depends his thesis and is now Dr. Wilson! Congrats! We wish you the best of luck at LAM research! 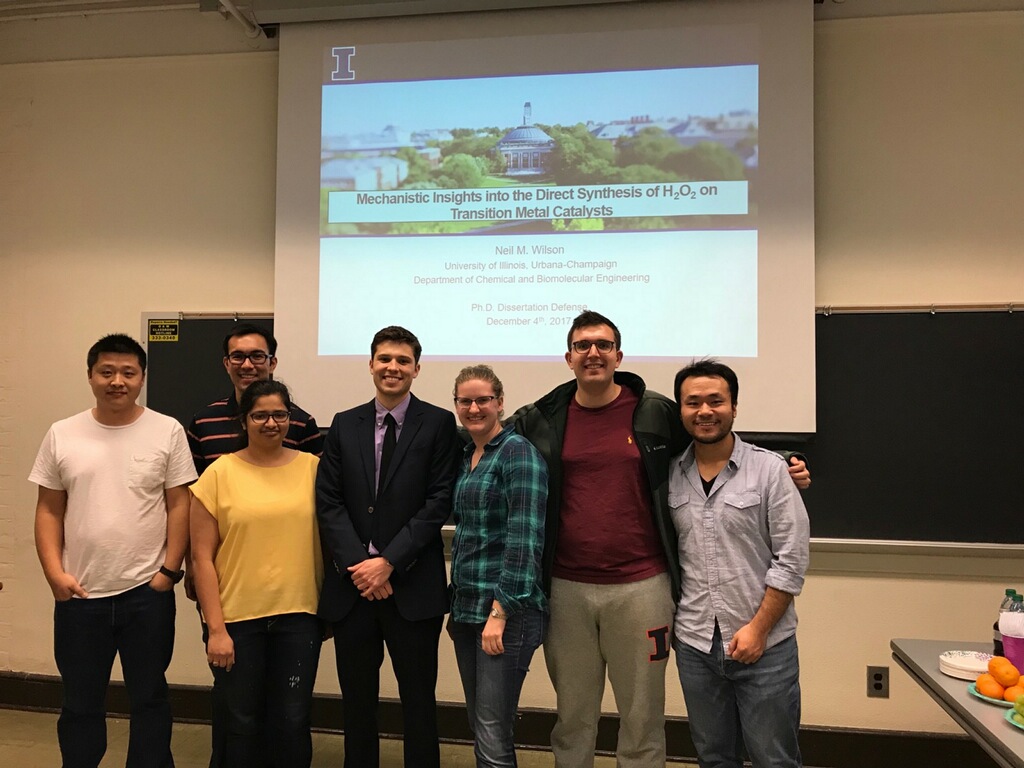 (11/17/2017) The group celebrates Andy’s successful defense with food and by casually saving the world – from both evil AI and doomsday devices! 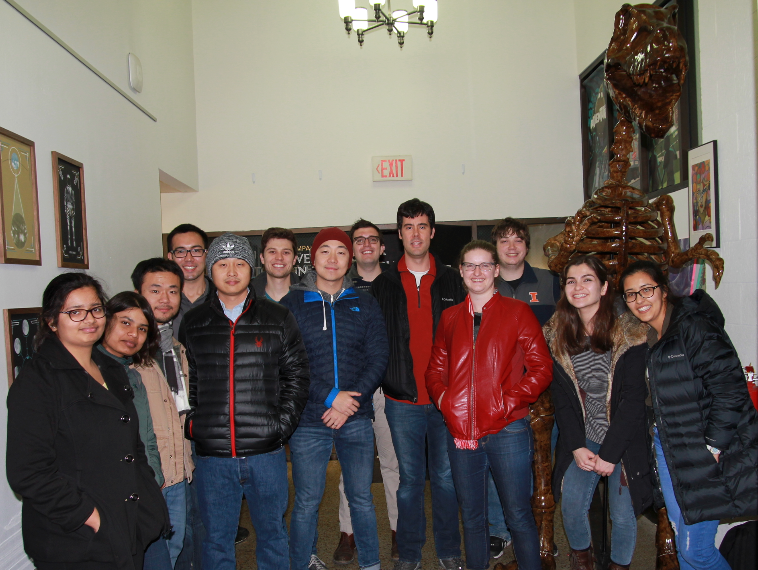 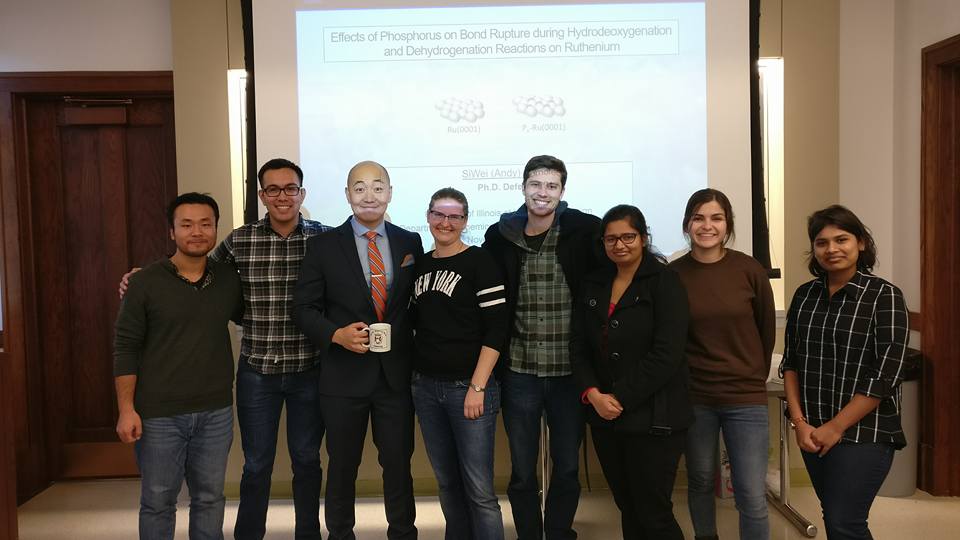 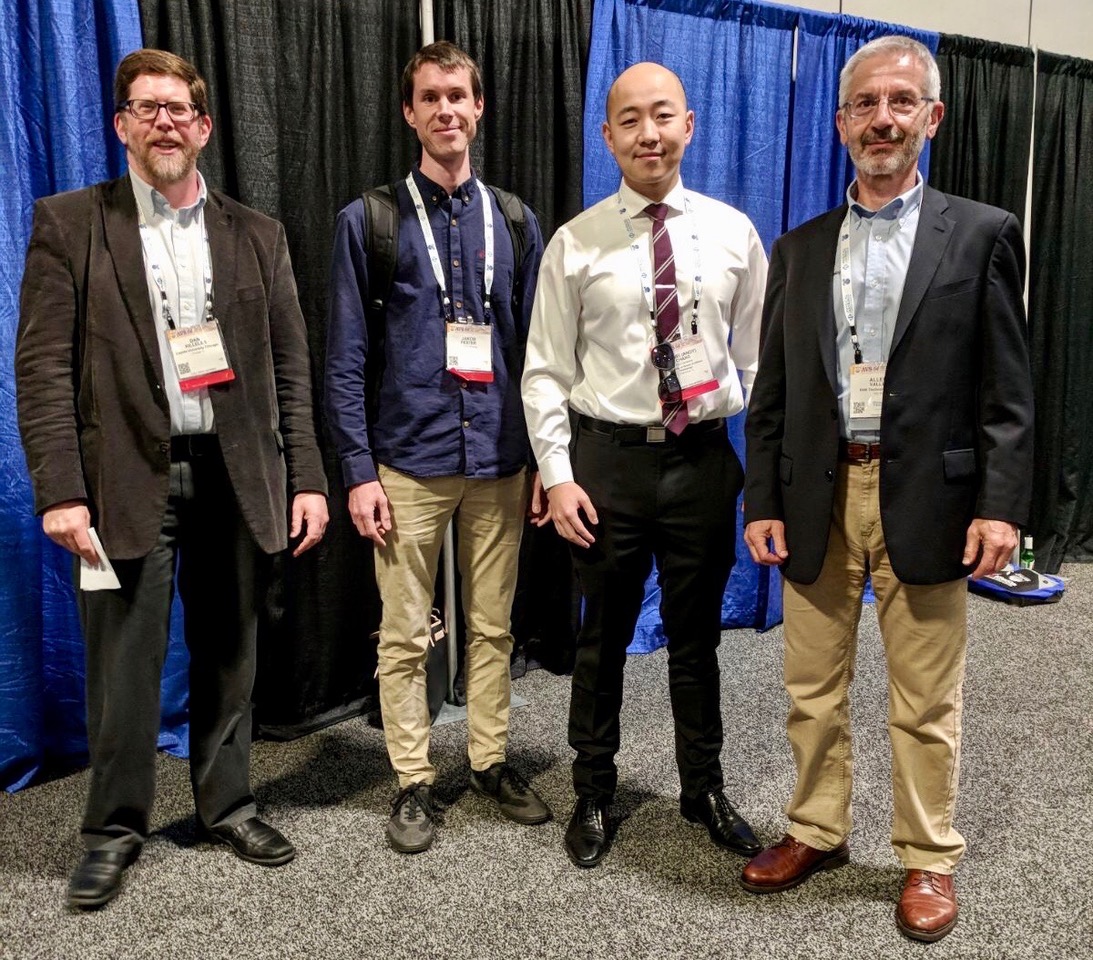 (7/2017) A publication by Andy and Vivek on the mechanism for C-C and C-O bond cleavage in Acetic Acid over Ru and P-doped Ru is accepted by J. Catal. Great job!

(6/04/2017) Dave, Megan, and Daniel give well-received talks at the 25th Meetings of the North American Catalysis Society in Denver, CO!

(4/28/2017) Daniel’s paper on the mechanism, reactive intermediates, and reactivity descriptors for epoxidations with hydrogen peroxide in metal substituted *BEA is accepted by J. Am. Chem. Soc.!

(4/15/2017) Daniel is selected as a Mavis Future Faculty Fellow by the College of Engineering. Congrats.

(3/16/2017) A publication by Taka, Andrew, and Daniel on the mechanisms for forming aromatic products from acetaldehyde and 2-butenal reactants is accepted by ChemCatChem. Nice work!

(3/10/2017) Congrats, Daniel. His paper describing the mechanism and active intermediates for cyclohexene epoxidation with H2O2 on Nb substituted BEA zeolite is published in the Journal of Catalysis.

(03/07/2017) Dave presented the groups work on catalytic oxidations and oxidants at his alma mater, the Department of Chemical Engineering at the University of Texas at Austin.

(2/9/2017) Daniel is a recipient of a Richard A. Kokes Travel Award to support his attendance at the 25th North American Catalysis Society meeting in Denver this June.

(2/9/2017) Megan and Daniel are both awarded Hanratty Travel Awards from the ChBE department to attend the ACS National Meeting in San Francisco this April.

(2/6/2017) Megan receives a travel award from the CATL division of ACS to attend the spring meeting in San Francisco. Congrats, Megan.

(12/01/2016) Dave presented the groups work on direct synthesis and epoxidations in the Department of Chemical and Biological Engineering at Northwestern University.

(11/08/2016) Dave gave a talk in the Department of Chemical Engineering at the University of Michigan.

(11/01/2016) Dave gave a seminar at the Department of Chemical and Biomolecular Engineering at The Ohio State University.

(10/11/2016) Andy’s paper describing how phosphourous influences the mechanism of formic acid conversion and barriers for C-H and C-O bond activation is accepted by The Journal of Physical Chemistry C. Well done, Andy!

(9/27/2016) Taka “graduates” and returns to Japan where he will start his group working in the areas of materials synthesis and catalysis at the University of Tokyo. Good luck, Taka!

(9/15/2016) Dave gave seminars at ExxonMobil Chemicals and the University of Houston, Department of Chemical Engineering.

(8/23/2016) Dave gave two invited presentations in the Energy and Fuels division at the Fall ACS Meeting in Philly.

(8/10/2016) Daniel and Pranjali submit their work on epoxidations on Nb-BEA to ACS Catalysis.

(8/9/2016) Megan is named to the List of Teachers Ranked as Excellent By Their Students for her work as a TA in ChBE 422, Mass Transfer Operations.

(7/15/2016) Neil, Daniel, and Pranjali submitted a review chapter on the production and use of H2O2 for atom-efficient oxidations to the RSC series Catalysis.

(7/6/2016) Dave gave a presentation at the International Congress on Catalysis in Beijing on the direct synthesis of H2O2 on Pd and AuPd nanoclusters.

(6/9/2016) Our review written in collaboration with Lipeng Wu, Amit A. Gokhale, and Dean Toste is now available online in the new journal Chem by Cell Press.

(4/1/2016) Daniel Bregante receives a National Defense Science and Engineering Graduate Fellowship. He is one of only 200 people nationwide to honored with this award in 2016. Congratulations Daniel!

(3/22/2016) The Dow Chemical Company invites Dave for a site visit and a presentation with the Inorganic Materials and Heterogeneous Catalysis group in Midland, Michigan.

(3/21/2016) Dave gives an invited talk at the monthly meeting of the Michigan Catalysis Society.

(3/18/2016) Our work on the mechanism for the direct synthesis of H2O2 is highlighted by the Materials Research Society.

(3/15/2016) Neil and Megan present their work at ACS in San Diego. Dave gives two invited presentations in the CATL division.

(3/1/2016) Neil and Megan have been selected by the Catalysis, Science, and Technology Division of ACS to receive travel awards to attend the 251st ACS National Meeting in San Diego. Congrats!

(2/17/2016) Dave recently earned an NSF CAREER Award for our group’s work on the direct synthesis of H2O2. Nicely done!

(1/22/2016) Our recent paper on the direct synthesis of H2O2 is featured on the cover of J. Am. Chem. Soc., selected as an ACS Editors’ Choice, and highlighted by the College of Engineering at Illinois, EurekAlert! (AAAS), Phys.org, , ChemEurope, etc (as well as C & E News earlier).

(12/30/2015) Work describing the effects of branching on alkane hydrogenolysis rates is now published in ACS Catalysis.

(12/7/2015) Our recent paper on the direct synthesis of H2O2 is highlighted in the December 7th issue of Chemical and Engineering News.

(11/27/2015) Neil’s paper “Mechanism for the Direct Synthesis of H2O2 on Pd Clusters: Heterolytic Reaction Pathways at the Liquid-Solid Interface” was accepted by J. Am. Chem. Soc.

(11/20/2015) Our group visited a local Escape Room adventrure and “saved the world” in record time on Friday night and then went out to celebrate.

(11/13/2015) Neil, Megan, Taka, and Dave all traveled to the 2015 Annual AIChE Conference in Salt Lake City, where our group gave four presentations on our most recent research results.

(10/23/2015) Andy, Neil, and Megan were all selected to participate in the annual ChBE Graduate Research Symposium and gave great presentations. Neil placed third in the oral presentation competition, and Andy placed second in the poster competition. Congratulations!

(9/18/2015) Megan and Neil receive Hanratty Travel Awards to present their work at the annual AIChE Meeting in Salt Lake City.

(9/15/2015) Neil passed his preliminary exam (in July) and Pranjali passed her qual. Congratulations to both of you.

(05/26/2015) Dave is named to the List of Teachers Ranked as Excellent By Their Students for teaching the undergraduate class ChBE 422, Mass Transfer Operations.

(5/17/2015) Graduation! Rong, Christine, Han, Aileen and Rogan all receive their B.S. in Chemical and Biomolecular Engineering. Congratulations, we know you will all do great as you move on to your jobs and graduate schools.

(5/14/2015) The group presents at the annual Spring Symposium of the Catalysis Club of Chicago. Dave gave an invited talk on the direct synthesis of H2O2

(4/17/2015) Megan is named as a Mavis Future Faculty Fellow by the College of Engineering. Congratulations Meg!

(02/22/2015) Dave is included on the List of Teachers Ranked as Excellent By Their Students for teaching the graduate class ChBE 551, Chemical Kinetics and Catalysis.

(08/20/2014) Andy and Dave are named to the List of Teachers Ranked as Excellent By Their Students for their work in ChBE 422, Mass Transfer Operations.

(08/03/2014) Neil and Malek are awarded Dow Chemical Company Graduate Fellowships in recognition of their research accomplishments in our group. Congratulations!

(10/11/2013) Megan Witzke (Case Western) and Malek Ibrahim (formerly of UOP and Cairo University) join our group. Welcome to the team, Megan and Malek!