Fast fashion is the second dirtiest industry, only coming in behind the oil industry in terms of pollution. They use harsh chemicals and pollutants to produce and dye clothes, and many textile producers are known for dumping those chemicals back into the local water supply without treating the runoff first. Fast fashion companies get their impossibly cheap prices by outsourcing labor to developing countries. These countries often have fewer regulations regarding pollution, so factories can worry less about meeting environmental restrictions and focus more on making ultra cheap clothes, even if the practices to produce them are terrible for the environment. Another factor that outsourcing includes is the cost of transportation. In the past, as Americans, a much larger percentage of our clothes were made domestically than there are now. This in itself isn’t inherently a negative thing, but when a shirt produced in China needs to be flown overseas to be sold in the US, the pollution from that mode of transportation also affects the environment. Multiply this over and over for each shipment of t-shirts, and the effect adds up to a lot of extra greenhouse gases being released into the air. Not only the processes, but also the materials commonly used in fast fashion are toxic to the environment. As our rate of purchases increases, our need for raw materials for fibers to make clothes increases as well. Large amounts of pesticides are used to grow the cotton many of our clothes are made from, and the plant, organic or not, uses vast quantities of water for it to be able to be turned into a t-shrit. Furthermore, we now wear polyester and other synthetic cloth derived from oil more than we ever have in the past.

As consumers become more aware of these practices and climate change becomes an increasingly important issue for the general population, major fast fashion behemoths such as Zara, H&M, and Forever 21 use greenwashed marketing ploys to distract consumers and detract from the real destructive effects of their production. For example, Zara recently started an initiative to make their stores more green and opened the first flagship store of that kind this year. They say it uses 30% less energy and 50% less water to operate than a conventional store space. This is great, but it masks the fact that many of their production practices cause major pollution. Other examples of similar practices are H&M’s recycling program, or Forever 21 building the largest solar powered system in LA. Objectively, these are great programs and it’s encouraging to see major clothing companies take steps and set an example of being “green,” but the issue is that these steps barely begin to scratch the surface of what these companies actually contribute to global climate change. They are practicing greenwashing, rather than just becoming more environmentally responsible because these policies are meant to look eco-friendly to consumers on the surface, but the companies do not actually having to change or improve their production methods to make an environmentally sustainable difference in the areas that matter the most.

While “green” initiatives and programs in themselves are progress in the right direction, it is vital that we as consumers continue to think critically about the motives behind them and question whether a company is truly being environmentally responsible, or if it is meant as a distraction from a larger issue. 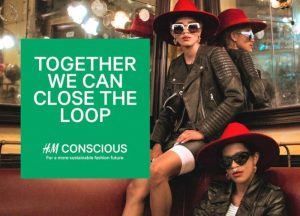 Example of an ad from H&M’s recycling campaign

Some interesting sources to check out:

I remember reading the other day that scientists found out we had officially surpassed the 400 ppm concentration of carbon dioxide in our air. This was viewed as a tipping point in climate change that may now be irreversible. Hearing it really jolted me, as very recently in the last few months I have been consciously making an effort to make my lifestyle more sustainable. Usually when we hear ways to make our lives for environmentally friendly, we think of things like recycling more, switching to energy efficient appliances, or eating organic. These are great, but one thing we often don’t think of as having an environmental impact is the clothes we wear. Through this blog, I am looking to research the ways companies use greenwashing in the fast fashion industries in such a way that consumers aren’t really aware of the environmental degradation their purchases often support. I’ve elaborated on these two terms below:

Greenwashing is a strategy used by companies to make themselves appear more environmentally friendly than they actually are. This is often used as a ploy to get people to buy their products because they are “sustainable” and give the illusion that a consumer’s conscience can rest more easily now that they’ve bought a product that appears to have a low environmental impact. This can show up in many different forms, like a green leaf on packaging, a statement saying a product is “99% natural” or in the form of clothing chains like H&M offering recycling programs at their stores. These are prime examples of greenwashing because the companies often don’t actually do anything more sustainable in their business. For example, it would take H&M twelve years to recycle the amount of clothing they produce in forty-eight hours, so the recycling really does very little to reduce their environmental impact.

I’ve already mentioned H&M’s recycling program, but this company is also a prime example of something called “fast fashion”. This phrase is used to refer to an industry in fashion built on extremely trendy, constantly changing clothes that are exceptionally cheap and usually poorly made. We’re all guilty of supporting fast fashion, whether you’ve heard this term before or not. How many times have you bought something from Forever 21, H&M, Zara, or another cheap clothing brand only to wear it one or two times before it fell apart, stretched out, or shrank? I have definitely done this myself more than a few times before and usually justify it with “It was cheap, so it doesn’t matter!” However, in reality, fast fashion has a very high price tag – it’s just not as clear as the price you pay at the register. Fast fashion’s high price comes from environmental destruction and sacrifices workers’ and women’s rights in many developing countries as they usually live in slums or squalid conditions, and often work long hours only to be paid rock bottom wages, so we can get rock bottom prices.

I believe that you can’t blame someone for the choices they make if they haven’t been educated on the implications of those choices in the first place, and I’m hoping this blog can educate not only myself, but also other people, about these practices because many of us simply are not aware of them.

Some sources for further reading: