In week 8, we had our last lesson in the Fab Lab. Same as the past two weeks, we worked on the Ultra Light Box Project in the Fab Lab. The project has three phases: coding, laser-cutting, and soldering. Until this week, everyone has already completed two of the three phases and is ready finalize the Ultra Light Box project. Regarding our term project, we moved one step further and conducted the capability assessment. 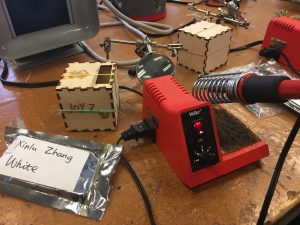 A lot of us found soldering skills useful in our term projects. As Ana said, “This soldering workshop really helped me understand the use of soldering. While I was participating in the workshop I thought of how for our final project idea, we will most likely need to solder wires together. ” Soldering is an effective and easy way to connect wires together, and our team is planning to use this technique for our project as well. 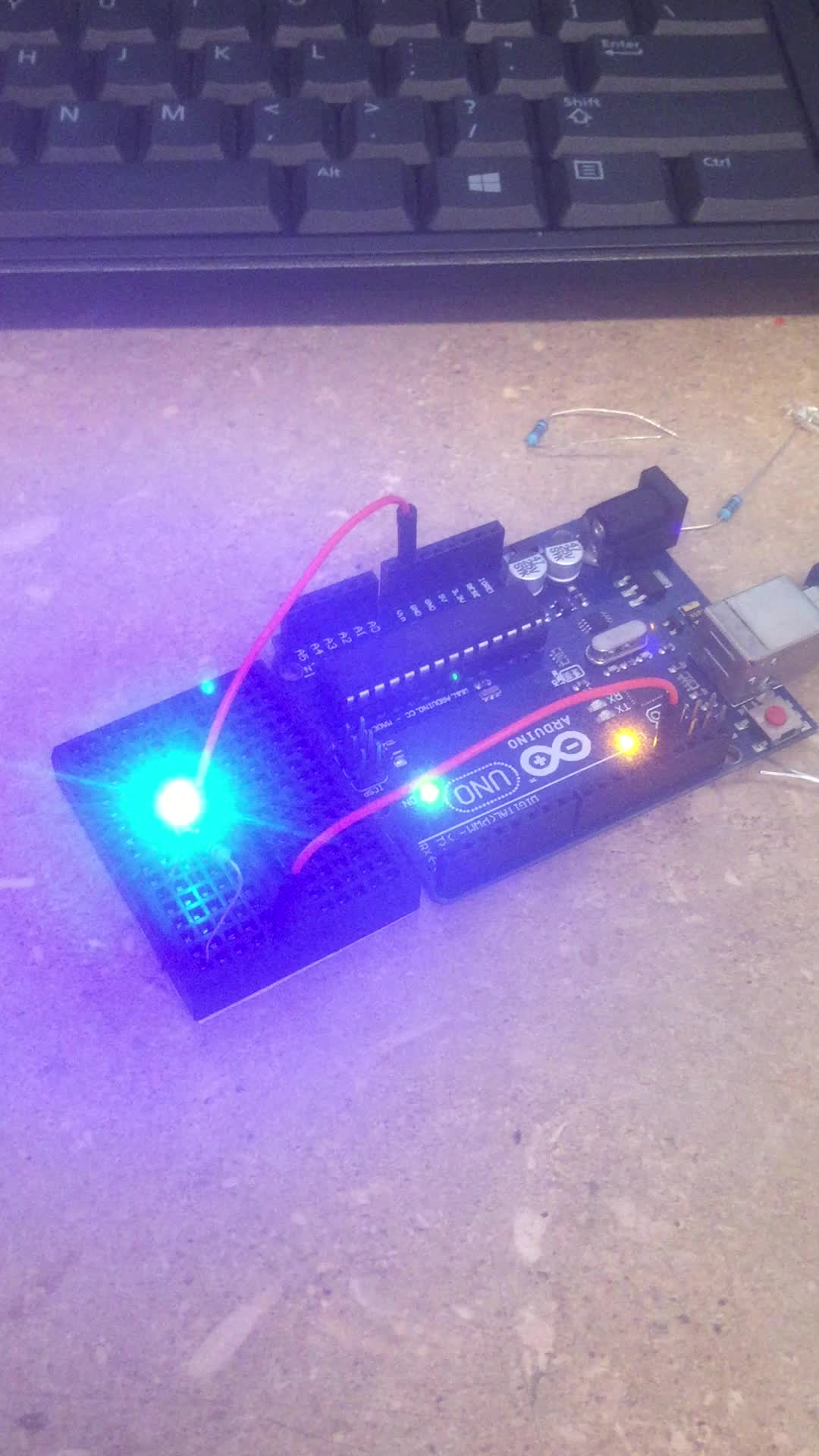 Picture of Arduino by Taofik

Taofik spent the lesson in the coding workshop using breadboards to build temporary circuits and code on Arduino. Arduino is an open source micro-controller that is easy to code with. Taofik reflected that, “I got to learn more about Arduinos which was a primary reason for taking this class. I will use what I have learned to work on our semester project and will use more tutorials such as Sparkfun’s online website and tutorials and Youtube.”

Chase designed the print using Inkscape and laser-cut a box. As Chase said, “The whole process, including both the design creations and actual cutting, lasted less than seven minutes, a stark contrast from the relatively lengthy time required for 3D printing.” We learned from this workshop that a faster way of creating a box is using laser engraver. 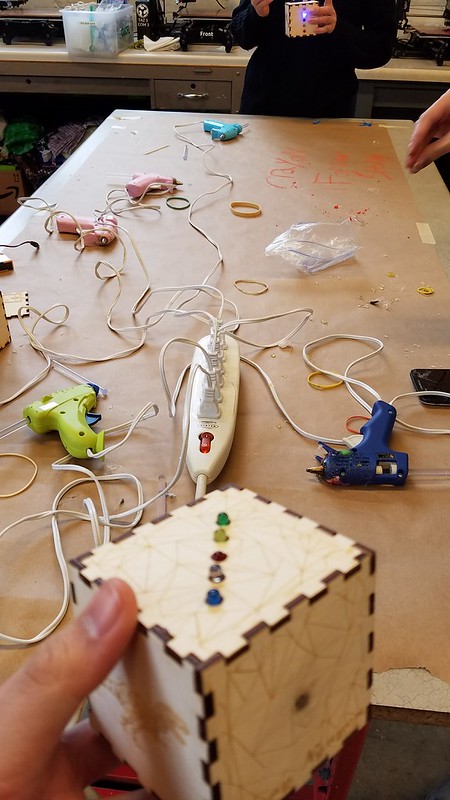 After all three phases were completed, we put the soldered circuits into the box and glued them together. Kenny reflected that “This process got a little frustrating because there were a lot of components that were coming together and a lot of room for error.” I would also agree with him since the room inside the box is tight and it is not so easy to squeeze everything inside without messing up the circuits.

The past three weeks have been a great experience that inspired the class of new perspectives on creating things. As John reflected, “It was really cool to be able to learn so many cool technical skills over the past three weeks, and these skills will prove handy later down the road not only in finishing our semester project, but in future classes and possibly in my job down the road.Learning skills like these can help me turn my ideas into real products that I could sell. With tools like these the possibilities are endless.” This project gave us a lot inspirations on how should we utilize these tools and skills in the future to realize our ideas. Together with the design thinking method we learned earlier in the semester, we are better equipped to start the projects off.

In prior weeks, we went through the process of brainstorming and narrowed down our selection for our project ideas. After the taking lessons in the Fab Lab for the past three weeks, we developed better perception in the feasibilities of our term project. Thus, we conducted project capability assessments that make sure we have or are able to obtain sufficient capability for our term project. Each team has described their ideas detailedly, evaluated on their project needs, internal capabilities, external capabilities, and source of information.

If, last week, all the projects was still on the conceptual level, all teams have delivered one or more convincing plans this week. In week 7, Team JJJ Inc. illustrated the idea of a simplified smart home device. “Many homes have light switches which operate mechanically by simply moving up and down when subject to an external force. Our product would allow the user to remotely turn the switch up and down using a simple bluetooth device” This week, Team JJJ Inc. described two ways of realizing this idea: one is to use a motor that pulls up and down strings, and another is to using a gear to rotate the switch. Other teams also came up with plans with great details. Based on these plans, they recognized their needs in capabilities.

The internal capabilities are the skills and knowledge that the team possess. Many teams included the skills they learned previously in this class. For instance, Team BCC Creations mentioned that their soldering skills will be needed for their project. Other teams including The MakerLAX

The external capabilities include other sources of help, such as the local labs and other individuals. A lot of teams included the resources that were introduced to us during the class. For instance, Team Zerott included materials provided by Vishal, Fab Lab laser cutter, and the MakerLab 3D printer. Team

Overall, this week we wrapped up our project in the Fab Lab, and we are ready to apply what we learned from the Fab Lab to realize our ideas. Stay tuned for more updates on our projects!