A thought is to a cell as an essay is to a human. Writing, like evolution, is a long and meticulous process. When I begin an essay I start with an idea, an idea that’s simple yet has promise and potential to grow. In evolution, the Universe, the Creator, whatever you may believe in, began with something small, something simple yet had promise and potential to grow. This something small, a single celled organism developed and evolved into all of life on Earth losing unfit organisms on the way, just as an idea evolves into a fully developed essay loosing unfit ideas on the way.

This is what the idea that created humans looked like:

A single celled organism that derived all life around four billion years ago, simple, just like a single idea that derived an essay, a book, or a series.

On the path to creating humans, evolution choose several wrong paths, and when it did it would eventually get rid of the unfit species these paths created, through extinction and continue on a right path. 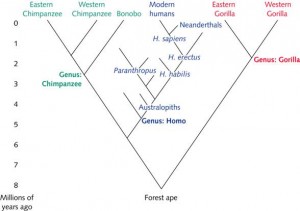 This is a chart mapping out the significant species that evolved from Forest Apes 8 million years ago. There were several mutations that were beneficial and created succesful organisms, just like there are several directions to take an essay and make it successful. In writing we often build off our thesis in the wrong direction and have to delete and go off of another more fitting idea. Extinction is natures delete key; Neanderthals, Paranthropus and countless unnamed species were unfit ideas in the story of life.

When I write sometimes I begin drifting away into ideas that do not necessarily fit my topic. This does not mean these ideas are bad necessarily, they are just not appropriate for the essay topic at hand.  In response I get rid of these ideas and create new ideas that relate to my topic. Evolution has created beautiful, strong, and resilient creatures before us, they just didn’t fit in our story.

So many ideas have been removed from the evolution of human beings. Eventually it is possible that we will evolve into a better and more fitting species making a better and more interesting story. Or maybe Mother Nature has come to a conclusion with us.  I think we should all be happy to be a part of nature’s story and acknowledge the beauty of it. It only took four billion years to right.