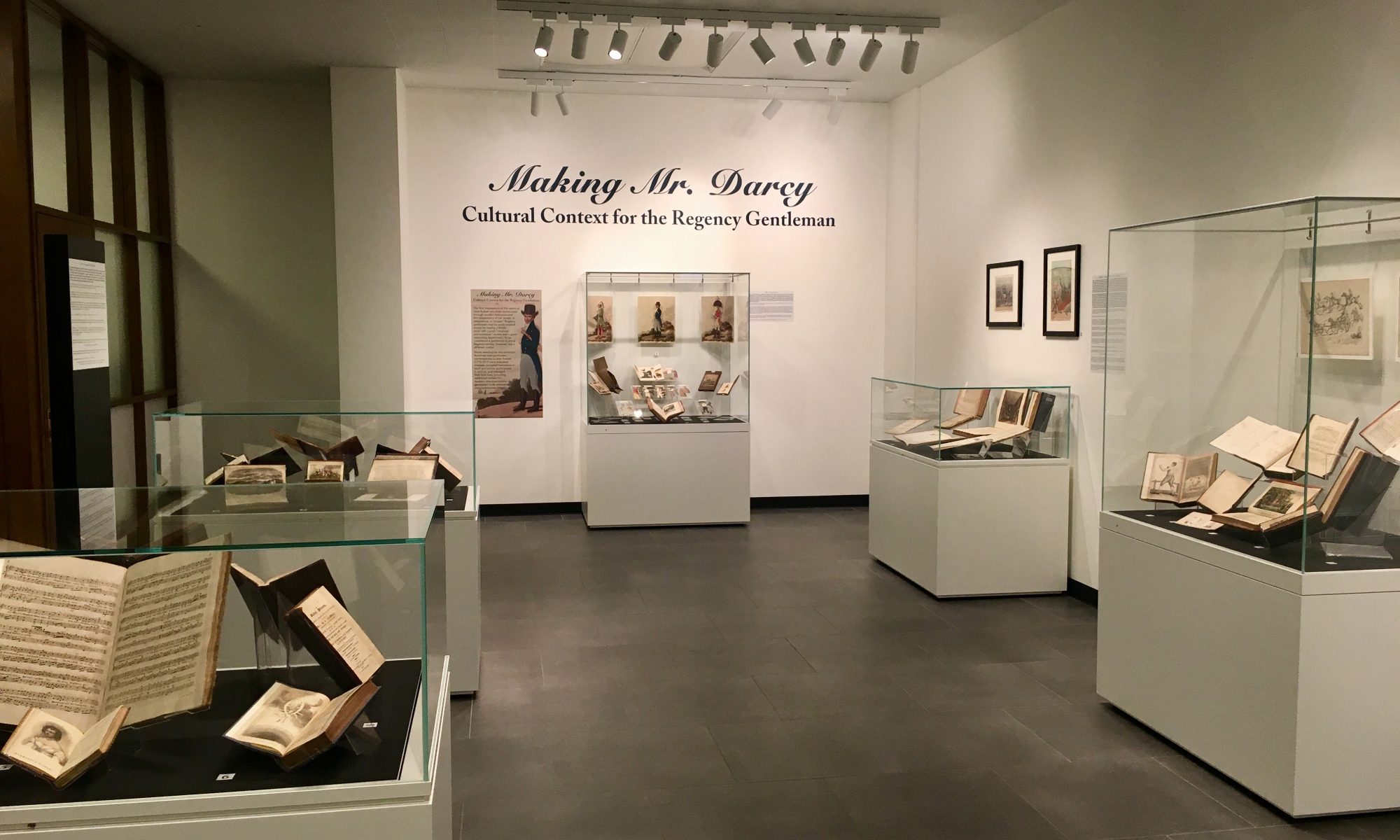 “When I have a house of my own, I shall be miserable if I have not an excellent library.” – Jane Austen

The Rare Book & Manuscript Library recently let us time travel back to the Regency Era and take in some afternoon tea.

Under the direction of Lynne Thomas’s curation, the library unveiled its spring exhibit, Making Mr. Darcy: Cultural Context for the Regency Gentleman.

The exhibit seeks to contextualize Jane Austen’s famed character, Fitzwilliam Darcy, within Austen’s contemporary society – the Regency Era (circa 1795-1837). Austen lived from 1775-1817. The Regency Era in England was marked by the removal of King George III (aka Mad King George) due to his unfitness to rule and the rise of his son as Prince Regent.

Gentlemen – those of noble or aristocratic birth – lived within certain social standards in this period. If a gentleman did not inherit his father’s estate, he would either become a clergyman, a lawyer, or an officer in the military. If his office did not require a certain dress, he would be seen around town in muted and athletic clothing – in stark contrast to the bright and frilly clothing men donned in the 18th century. For activities, a gentleman might choose to partake in boxing, riding horses, or wrestling exercises. Fitzwilliam Darcy seems to fit the bill of a Regency Gentleman.

To learn more about how this exhibit came to be, we interviewed Lynne Thomas, head of the Rare Book & Manuscript Library and Juanita J. and Robert E. Simpson Rare Book and Manuscript Professor:

When/How did you encounter Jane Austen for the first time?

LT: Oh, goodness, Jane Austen has been with me for so long that I am honestly not sure when I first encountered her work. I’d guess it was high school that I first read her work, but my first real understanding of the depths of Austen came when reading Persuasion during one of my sophomore English novel courses in college. It is still (in my opinion) her best, most complex, accomplished novel, and I never would have moved beyond Pride & Prejudice and Sense & Sensibility without that course.

What was the most challenging part of curating this exhibit?

LT: Selection! I found upwards of a hundred items that met the general theme, but the big challenge was narrowing them down, and figuring out what to use because it made more sense with the story I wanted to tell (once I decided what that was). The other thing I struggle with is explaining myself; as materials are grouped, sometimes it’s a challenge to explain WHY they go together.

How did everyone feel about dressing up in Regency garb for the exhibit opening?

LT: My dress was my own, so I was obviously okay with it. J The RBML folks who dressed up were all happy volunteers who enjoyed it.

How do you take your tea?

LT: It depends upon my mood. Sometimes I prefer it with milk and sugar, but sometimes I take it unadulterated, just plain tea.

What themes or motifs were you hoping to highlight with the collection and why?

LT: This was an exhibition where I began with the title, and then had to work out what that meant, and what I wanted to show once I figured out what the title meant. I had begun with the theme of “Austen first editions,” so those were always going to be part of it, but the choices beyond that were driven by what was in the collection. Then, when we acquired the 1811 paper doll (The Protean Figure), I basically reworked the entire exhibition around it, because it was so visually stunning it needed to be at the center.

What is your favorite piece exhibited and why?

LT: Although I adore the Austen first editions, the Protean Figure is my new favorite. It is stunning and whimsical, and I’m so glad that it came into our collections.

Be sure to go visit the RBML and see The Making Mr. Darcy: Cultural Context for the Regency Gentleman exhibit is on display from 2/21/19 – 5/24/19.

Check out photos of the ephemera given out at the exhibit opening, below: 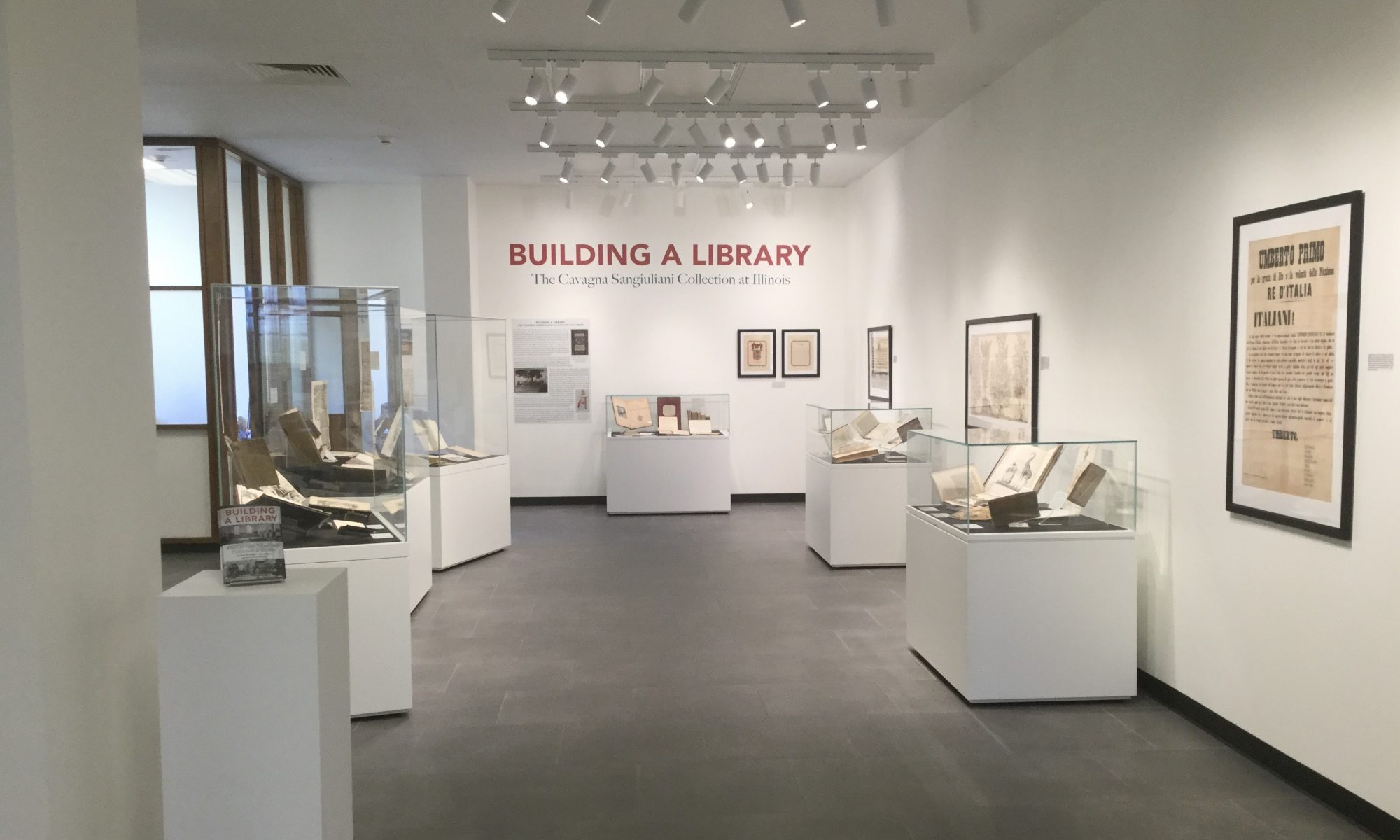 Recently, the Rare Book and Manuscript Library exhibited a portion of its 85,000 item collection purchased from Count Antonio Cavagna Sangiuliani’s estate in Italy. The exhibit entitled “Building a Library: The Cavagna Sangiuliani Collection at Illinois,” focuses on several themes found in the collection’s materials including the sciences, the arts, genealogy and heraldry, and social life and customs.  This vast collection has many interesting pieces and a fascinating history of its own.

To learn more, we talked about with the exhibit’s curator Chole Ottenhoff. Ottenhoff serves as Principal Cataloger and Cataloging Project Manager at the Rare Book and Manuscript Library.

END_OF_DOCUMENT_TOKEN_TO_BE_REPLACED 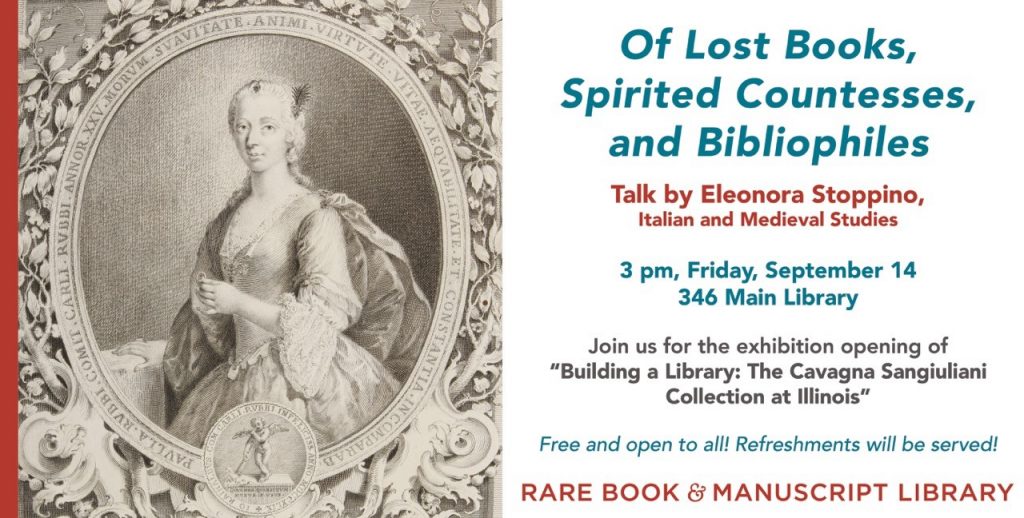 We are looking forward to seeing our hard work on display at this upcoming exhibit!