In the coming weeks, we will feature blog posts written by a current MSLIS student in the iSchool at the University of Illinois, Annabel Pinkney. Annabel is interested in the material culture of the book, the history of bookbinding, and the preservation and conservation of library materials. Due to her interests in the physical wellbeing of library items, she enrolled in an independent study this semester to practice book and paper conservation treatment and to explore historic bookmaking. This week she is creating a tacketed stationer’s binding!

With the onset of the global pandemic, I have shifted to working remotely. I have sorely missed the amenities of working in a conservation lab, but so far, I have been able to work from home fairly efficiently. To aid in the adjustment to working from home, I am taking the rest of the semester to focus on building historic book models and reading, reading, reading! This week, I am making a tacketed stationer’s binding. Join me in taking a look at what this involves.

Tacketed stationery bindings are considered a type of temporary binding. These are non-adhesive structures most commonly made in 16th century Germany, Italy, and the low countries (what is modern-day Belgium, The Netherlands, and Luxemburg).  According to Nicholas Pickwoad,  “it can be said that tacketed bindings of printed books were intended to perform a variety of functions within and outside the book trade. The ease with which they allow a cover to be attached to and separated from a sewn text-block and their lightweight made them attractive to the book trade, which found them useful for giving immediate cheap protection to their wares. The private or institutional owner who did not wish to spend more on their libraries than they had to, clearly found them a convenient way to protect their books and allow them to be used.”

What is a tacket?

There are two types of tacket bindings, primary and secondary.  Primary tackets individually secure each section of pages to the cover one by one, whereas secondary tackets are used to attach the entire text block (which is already held together by the conventional manner of sewing) to the cover.

A Word on Temporary Bindings 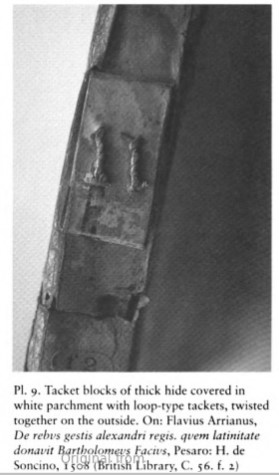 In the 1500’s, books were not necessarily produced as they are today. Books were sometimes sold as sewn blocks of printed pages without a case. After purchasing a text-block, one could hire a binder to design and build a case for their book with hard covers (usually made of wood). Depending on the wealth of the owner and the importance of the book, the case could be very fancy (e.g. a full leather covering with gold tooling and bosses). But until the owner of the text-block had the means and intention to have it cased in boards, the text-block could be temporarily secured in a limp case of vellum or leather – like a tacket binding! This provided simple and quick protection for their new purchase.

Some books, however, were never intended to have a sturdy wooden case. The ease of construction, low cost, ergonomic, and lightweight handling of a limp vellum cover were ideal qualities for account keeping books, typically known as ledger bindings. For these reasons, tacketed bindings may not have always been intended to be temporary.  Pickwoad tells us that “some of the surviving [tacketed bindings] were clearly intended as no more than temporary protection for the texts found inside them and have survived by accident, while others were clearly more permanent in intention, but it is not often possible to know where to draw the line between the two.”

I began by making my text-block. I folded large, hefty sections of paper and secured them with a sewing structure I imitated from an online recording of the Guild of Book Workers 2007 Standards meeting (Creating Medieval Stationer’s Binding Structures: Lacing Patterns, Tacketing Methods, and Leather by Chela Metzger) However, instead of using split leather thong, I used Bristol board. You can see that the supports are longer on only one side. This was traditionally done to allow for the possibility to add more sections to the book at a later time.

Next, I constructed a paper case with large turn-ins and three leather overbands. These cases would normally have been made out of vellum, parchment, or leather, but I only had access to a thick, textured paper (I used Canson Mi Tienes paper). I decided to add cardstock weight paper insets laced onto my supports to strengthen the covers. I’m intending to add an Italian decorative lacing pattern into the overbands once I have the right cord. Simultaneously, I consolidated my spine with a layer of wheat starch paste and added Japanese paper linings to the spine between my sewing stations.

My next step was to start making my tackets. I cut up very thin pieces of parchment and I soaked them in water for about 10 minutes to make sure they had been sufficiently hydrated and were pliable. Once moisturized, I twisted the tackets firmly and let them dry in their new formation. While my tackets dried, I sewed endbands onto my text-block.

Finally, I attempted the tacketing process. I pierced the parchment tackets into the sections of my text-block and out my case’s pre-punched leather overbands. I found securing the tacket ends to be more challenging than I expected.  After an hour or so of adjustments, my tackets ultimately turned out to be a little looser than I would like. Parchment is a beast of a material, and I am relatively inexperienced in coaxing it to do what I want.  However, after I tighten my tackets a bit and add decorative lacing to the overbands, I will consider this model a win.