The global pandemic has affected us all in different ways. For most of us, we’re facing a lot more down-time and time spent indoors. In response to the growing need for boredom mediation, we’re supplying you with this short tutorial on how to make a pamphlet binding along with some brief historical tidbits. Enjoy!

A Very Brief and Noncomprehensive History of the Pamphlet Binding.

The pamphlet binding is a simple structure with a long history in the Western world. In fact, the term pamphlet is derived from the main character of a love poem, Pamphilus seu de Amore, written in the 12th century. The poem rose to popularity, and the term pamphlet came to be associated with small pieces of writing after the character, Pamphilus. (Partridge, 1966) The definition of a pamphlet binding, according to Randy Silverman (1987), is “a thin book composed of between one and three folded sections, linked together by a sewing structure and bound as a permanent enclosure.” Today, pamphlet structures are still used as conservation structures and are commonly found in zines, brochures, music, and other ephemera.

Most ubiquitously throughout history, pamphlet bindings have been used for ephemera because of their economic use of material and ease of assembly. Pamphlet production was likely at a highpoint during the late 18th century in Europe and America. (Silverman, 1987) In early America, pamphlets were a dominant form of information dispensation, and could even be considered as “America’s first social media” (check out the RBML’s awesome blog on the topic here). With just a little digging, you can find evidence of pamphlet structures throughout history.

Here’s an example! As early as 1860, the U.S. Government Publishing Office binders produced every kind of folded, stitched, sewn, or glued pamphlet and book.

Pamphlets were also the common structure for binding serialized novels as they were published. For example, this serialized collection of David Copperfield by Charles Dickens (below) exists as pamphlets!

There are infinite historical variations on the pamphlet binding. One will find that historical example materials run the gamut in sewing supports, endpaper styles, and covering materials. There really is no right or wrong way to make one – so experiment with what you have, and let’s get to it!

Did you know? The University of Illinois had its own “Pamphlet Binding and Book Repair” section of the library, started by William Henderson (Preservation Librarian, 1986-1996) in 1989. This was a critical step towards establishing a conservation department. In its beginnings, 8-10,000 pamphlets were bound per year.

STEP 1: Begin by folding your pieces of paper in half. Fold all your sheets at once, with your cover weight paper on the outside of the fold. Use your fingernail to crease the edge or use a bone folder if you have one. 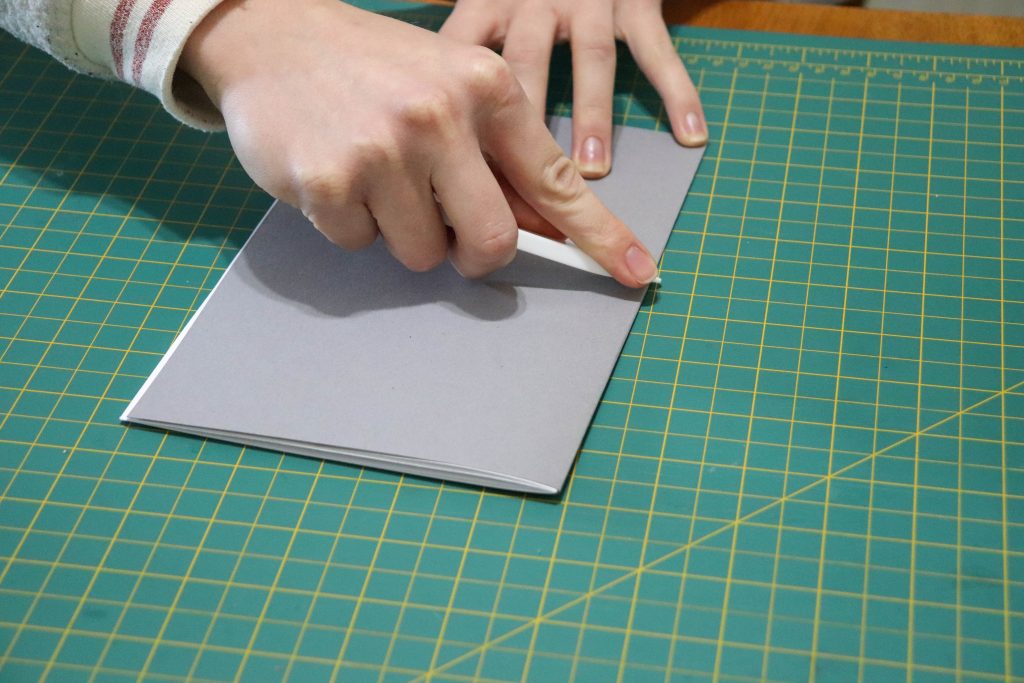 STEP 2: Use your ruler to measure the height of your pamphlet. Make three marks on the inside of the pamphlet, one at the center, and two equidistant from either side of the center mark. 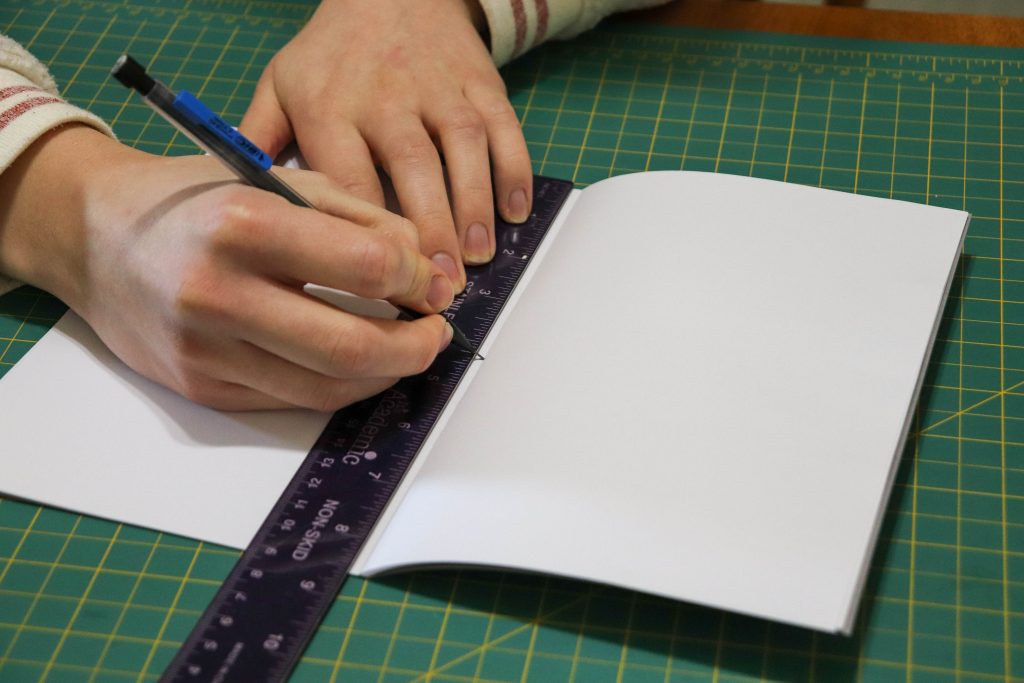 STEP 3: Use your awl to pierce through the marks you made. Aim to go directly through the fold from the interior to the exterior of the pamphlet. 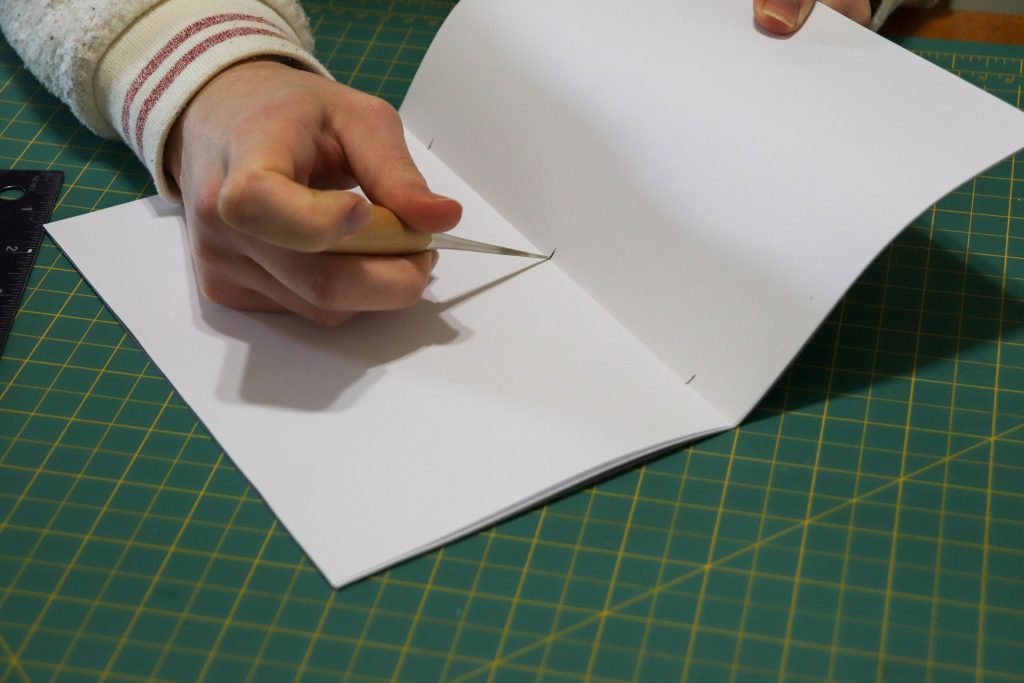 STEP 4: Cut a piece of thread 2 ½ times the height of your pamphlet and thread your needle. 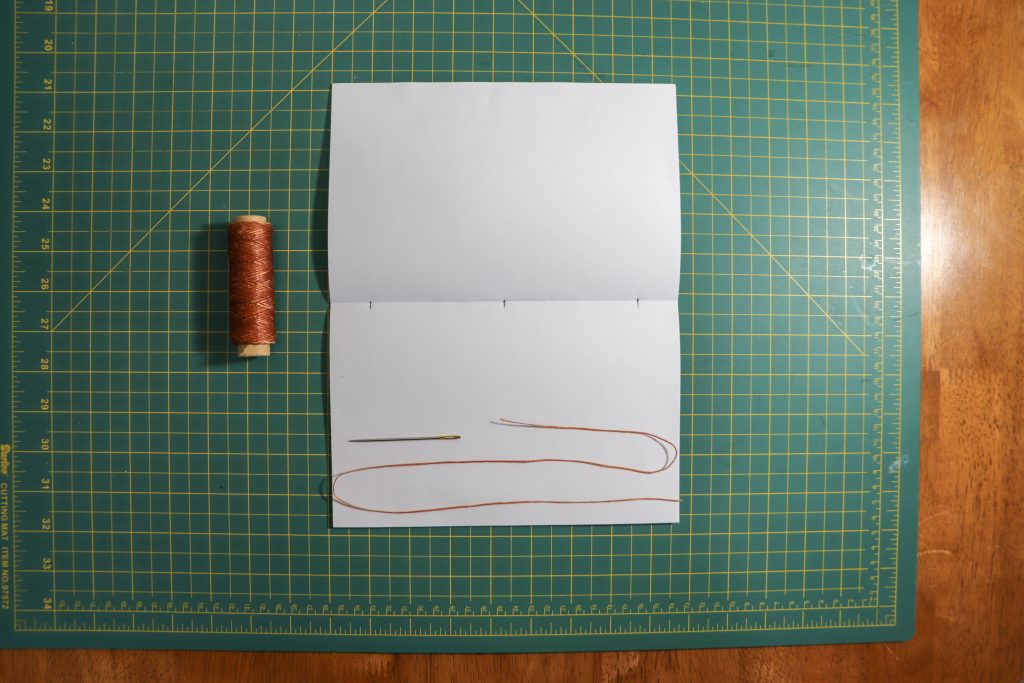 STEP 5: Take your needle and thread through the center hole of the pamphlet leaving a small tail behind. 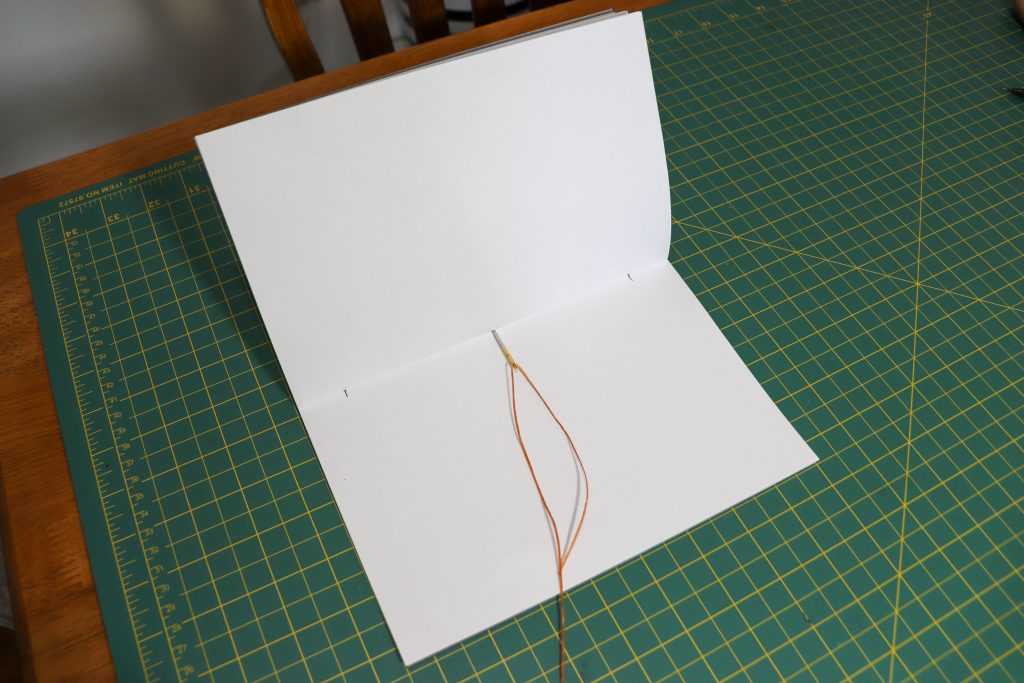 STEP 6: Take the thread from the outside through one of the other holes. It doesn’t matter which one. In this case, I went through the top hole. 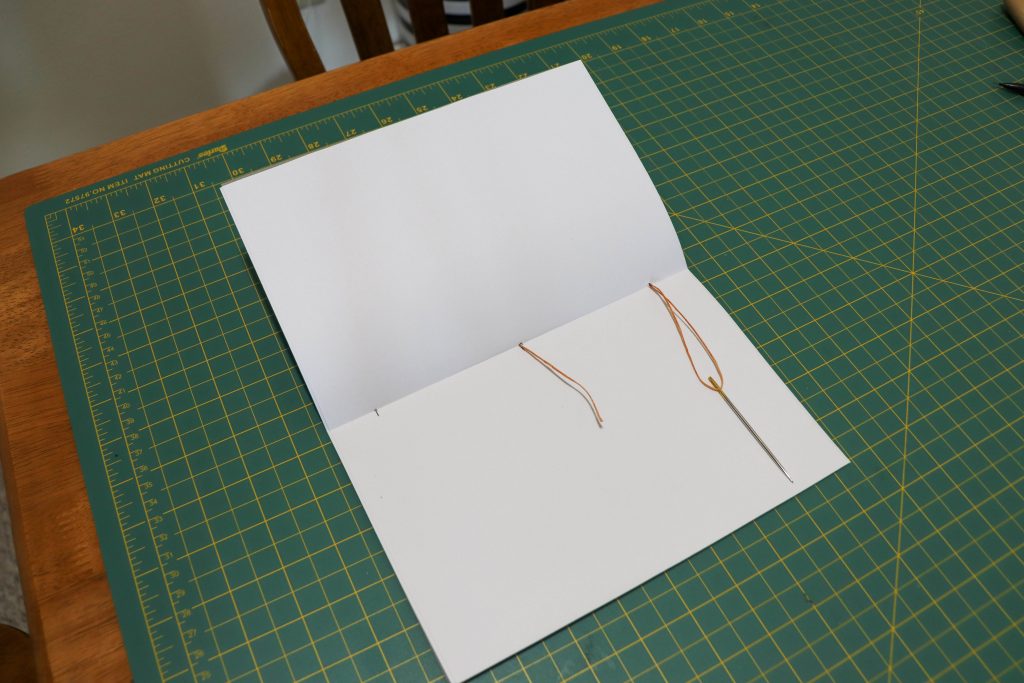 STEP 7: Bring the thread all the way across the interior of the fold, and out the final hole. In this case, I am going from the top hole to the bottom hole. The key is to take the thread through the hole you have not used yet. 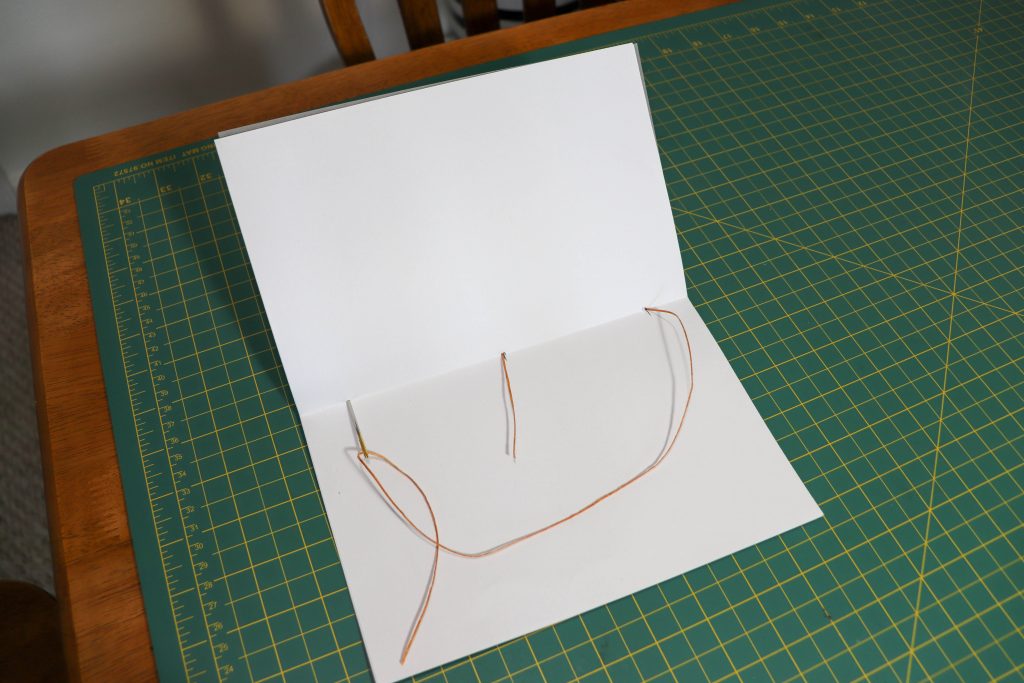 STEP 8: Finally, take the needle back into the center from the outside. This will leave the two ends of your string coming out the center hole on the inside of your pamphlet. 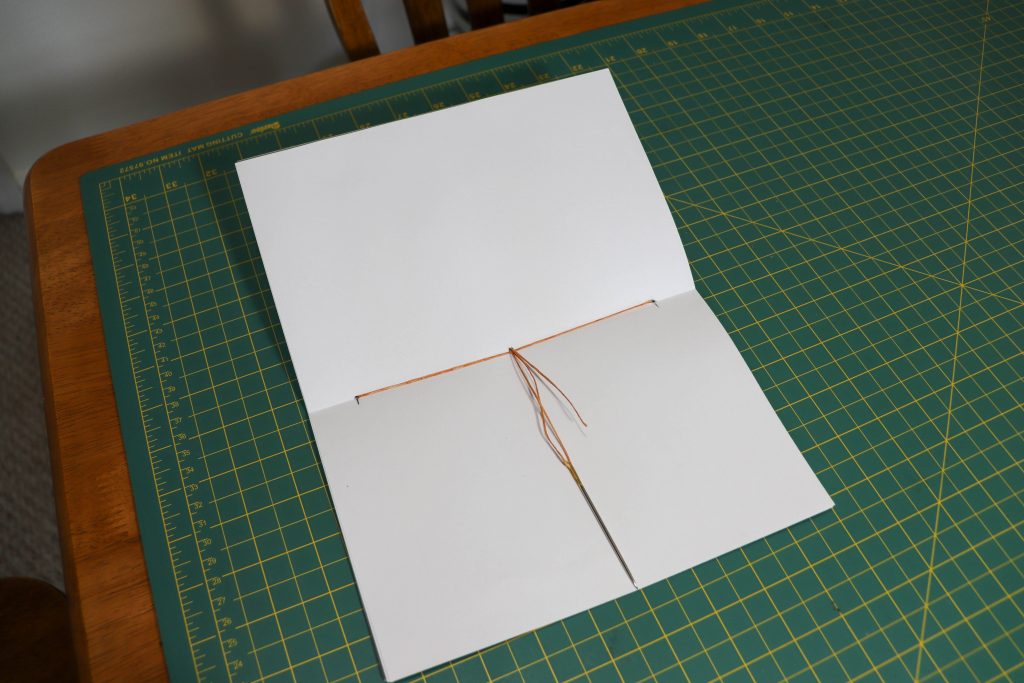 STEP 9: Tie off the strings and trim the ends. 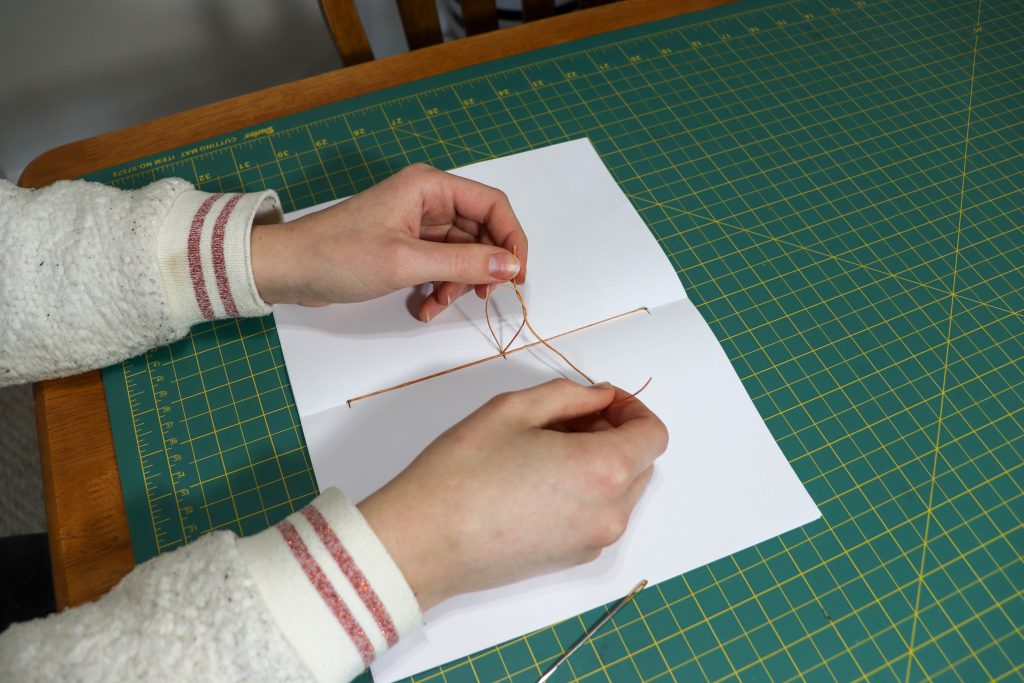 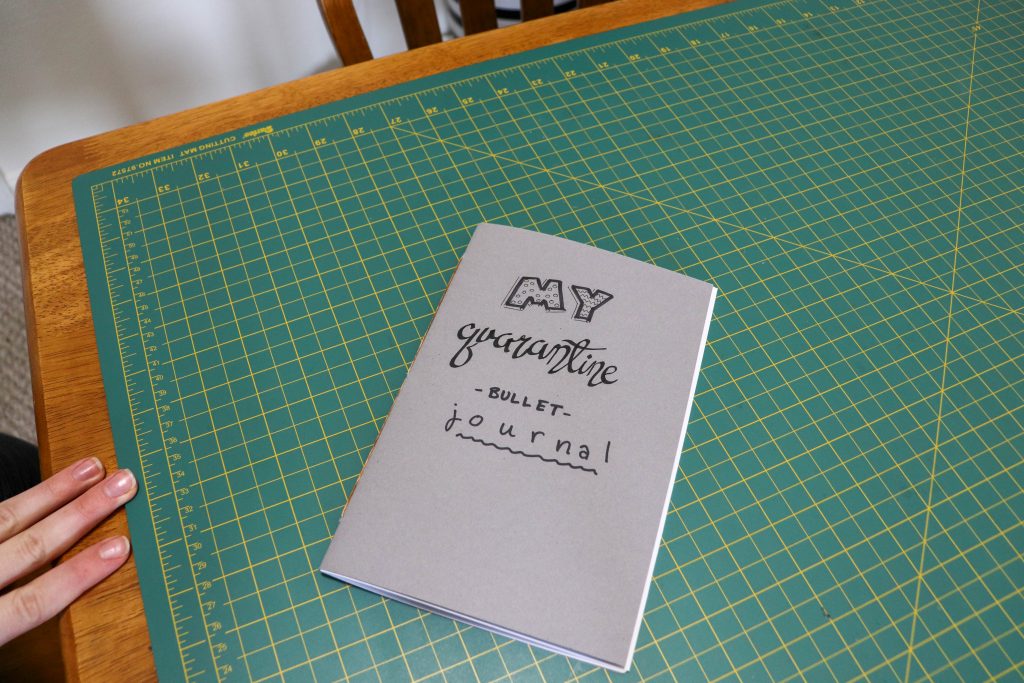 Randy Silverman. “Small, Not Insignificant: a Specification for a Conservation Pamphlet Binding Structure.” The Book and Paper Group Annual Vol. 6 (1987)