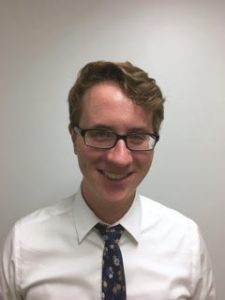 I would call myself a rhetorician. I earned my Bachelor’s degree from Willamette University in Oregon before coming to U of I for my Master’s in Communication, which I received in 2014. I am currently working toward my PhD in Communication. I’ve taught introduction to public speaking and writing, argumentation, and communicating public policy. The courses I teach tend to focus on thinking about how rhetoric intersects with contemporary political discourse and how people use rhetoric to make arguments in that arena.

I study the rhetoric of digital spaces. I’m interested in what changes and what stays the same when we start to think about rhetorical theories in the context of new media and social media. How should our theories change when we think about rhetoric in a digital space? My research here at the Scholarly Commons is about Twitter responses to terrorist events. Some of the questions I’m asking are: How do people on Twitter talk about these events? What are the political communities they’re imagining when they speak about these events? What are the ways of articulating one’s political views in this context?

My favorite work-related duty is talking to the subject specialists at Scholarly Commons. It’s fun to gain insight and new ways of seeing my research by discussing the problems I’m facing to my colleagues. They’re a great resource because their diversity helps me conceptualize my research in new ways.

Savvy Researcher Workshops. The workshops for some of the more obscure topics aren’t heavily attended, but they helped me get a gauge on how other people were working on their projects and showed me what tools I should be using.

I’m cheating and choosing two books, one for rhetoric and one for digital humanities. For rhetoric I’d recommend Still Life with Rhetoric by Laurie Gries. It’s about the digital circulation of images and represents a way of thinking about distributed rhetorical activity in digital contexts. And for digital humanities I’d recommend Reading Machines: Toward an Algorithmic Criticism by Stephen Ramsay. It makes a broader call for “algorithmic criticism” that uses computation as a productive constraint under which humanistic inquiry can take place.

Want to get in touch with Matthew? Send him an email or come visit him at the Scholarly Commons!