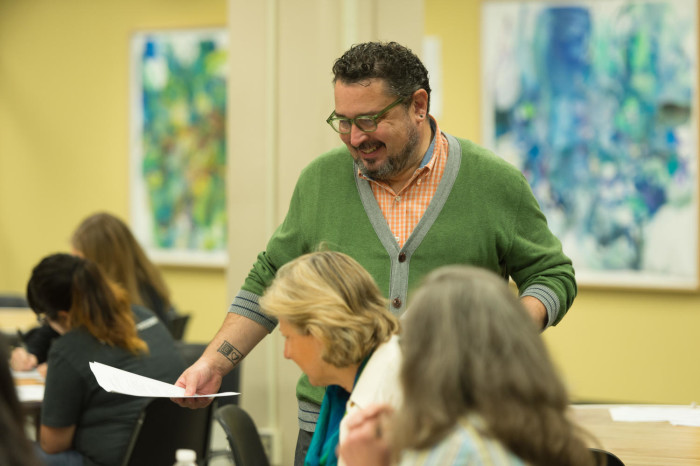 This latest installment of our series of interviews with Scholarly Commons experts and affiliates features one of the newest members of our team, Spencer Keralis, Digital Humanities Librarian.

What is your background and work experience?

I have a Ph.D. in English and American Literature from New York University. I started working in libraries in 2011 as a Council on Library and Information Resources (CLIR) Fellow with the University of North Texas Libraries, doing research on data management policy and practice. This turned into a position as a Research Associate Professor working to catalyze digital scholarship on campus, which led to the development of Digital Frontiers, which is now an independent non-profit corporation. I serve as the Executive Director of the organization and help organize the annual conference. I have previous experience working as a project manager in telecom and non-profits. I’ve also taught in English and Communications at the university level since 2006.

My CLIR Fellowship really sparked the career change from English to libraries, but I had been considering libraries as an alternate career path prior to that. My doctoral research was heavily archives-based, and I initially thought I’d pursue something in rare books or special collections. My interest in digital scholarship evolved later.

My current project explores how the HIV-positive body is reproduced and represented in ephemera and popular culture in the visual culture of the early years of the AIDS epidemic. In American popular culture, representations of the HIV-positive body have largely been defined by Therese Frare’s iconic 1990 photograph of gay activist David Kirby on his deathbed in an Ohio hospital, which was later used for a United Colors of Benetton ad. Against this image, and other representations which medicalized or stigmatized HIV-positive people, people living with AIDS and their allies worked to remediate the HIV-positive body in ephemera including safe sex pamphlets, zines, comics, and propaganda. In my most recent work, I’m considering the reclamation of the erotic body in zines and comics, and how the HIV-positive body is imagined as an object of desire differently in these underground publications than they are in mainstream queer comics representing safer sex. I also consider the preservation and digitization of zines and other ephemera as a form of remediation that requires a specific ethical positioning in relation to these materials and the community that produced them, engaging with the Zine Librarians’ Code of Conduct, folksonomies and other metadata schema, and collection and digitization policies regarding zines from major research libraries. This research feels very timely and urgent given rising rates of new infection among young people, but it’s also really fun because the materials are so eclectic and often provocative. You can check out a bit of this research on the UNT Comics Studies blog.

I think comics and graphic novels are generally underappreciated in both pedagogy and research. There are comics on every topic, and historical comics go back much further than most people realize. I think the intersection of digital scholarship with comics studies has a lot of potential, and a lot of challenges that have yet to be met – the technical challenge of working with images is significant, and there has yet to be significant progress on what digital scholarship in comics might look like. I also think comics belong more in classes – all sorts of classes, there are comics on every topic, from math and physics, to art and literature – than they are now because they reach students differently than other kinds of texts.

If you could recommend one book or resource to beginning researchers in your field, what would you recommend?

I’m kind of obsessed with Liz Losh and Jacque Wernimont’s edited collection Bodies of Information: Intersectional Feminism and Digital Humanities because it’s such an important intervention in the field. I’d rather someone new to DH start there than with some earlier, canonical works because it foregrounds alternative perspectives and methodologies without centering a white, male perspective. Better, I think, to start from the margins and trouble some of the traditional narratives in the discipline right out the gate. I’m way more interested in disrupting monolithic or hegemonic approaches to DH than I am in gatekeeping, and Liz and Jacque’s collection does a great job of constructively disrupting the field.