In my last post, I described the first phase of my research, in which I am attempting to develop an empirically informed definition of ‘conspiracy theory’. In this post, I want to discuss the second focus of my research: why it is that conspiracy theories are so compelling for so many people. 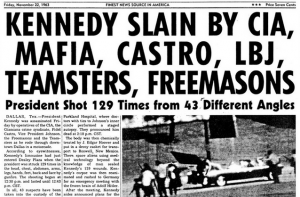 Although the specifics can be debated, it is clear that conspiracy theories are very popular. In a recent survey, 61% of participants claimed belief in some form of a conspiracy theory about the assassination of John F. Kennedy. This could possibly be attributed to increased publicity about the event due to its impending fiftieth anniversary and coverage of the release of some previously classified documents regarding it. But in an even more wide-ranging study four years ago, the number was 51%. At the very least, it looks plausible that more than half of Americans believe in this particular conspiracy theory, and there are plenty of other theories out there. For example, approximately 40% of respondents endorsed the conspiracy theory that the FDA is withholding a natural cancer cure.

My own suspicion is that an important part of the appeal of conspiracy theories is that we tend to find appeals to coincidence unconvincing. This is often perfectly reasonable. If a recently-elected politician installs close friends and family to all important posts, insisting that, by coincidence, their friends and family were the most qualified individuals for the posts, we will be rightly suspicious. It can be a problem, however, when this suspicion transfers over to extraordinarily complex events. For example, there is a long-standing conspiracy theory that Bill Clinton arranged for the assassination of dozens of people with whom he had varying levels of contact. An enormous part of the appeal stems from the seeming unlikelihood of so many deaths that can be linked to Clinton. Of course, a president comes into contact with a staggering number of people, and some small number of these are bound to die in a variety of ways. It is not surprising that a number of people who met Clinton died; it is merely coincidental, and what would really be surprising is if no one who he met died. When a case is sufficiently complex (such as the network of everyone a United States president meets), coincidence will often be the explanation for events. 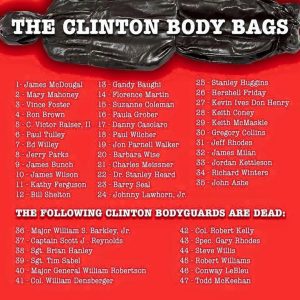 There are other cases where “conspiratorial thinking,” in which we are inclined to suspect agency is the cause of an event rather than coincidence, seems appropriate. It seems appropriate that homicide detectives presume agency was involved rather than coincidence when investigating an unexpected death, and that they ask questions like “Who would benefit from this?” in determining what agency was at work. On the other hand, it seems inappropriate that a voter should presume agency rather than coincidence was involved in explaining why a former member of the president’s staff died in a plane crash, and should not ask questions like “Who would benefit from this?” in order to discover who might have arranged the disaster.

Conspiratorial thinking, utilized in the appropriate circumstances, is a powerful tool that allows us to discount appropriately explanations that are, in other circumstances, much more plausible. When applied in inappropriate circumstances, on the other hand, conspiratorial thinking can metastasize and overwhelm our rational thinking. For instance, someone nearly always benefits from any event, so that asking “Who would benefit from this?” will nearly always yield a suspect. Without compelling reason to suspect agency in the first place, it is important to refrain from asking the question. My hope is to run a series of psychological studies to see whether people who believe in conspiracy theories are also more suspicious of coincidence as an explanation in general.

In my next post, I’ll talk some about some difficulties I’ve had running the initial portion of this study, as well as talk a bit about the digital tools I’m using.