Part of my internship at the Scholarly Commons will be a series of blog posts to describe my research and the different tools that I’ll be using to pursue it. In this first post, I’ll begin to give an account of my overall research project. Future posts will deal with other parts of the research project, what sorts of tools I will be using, the ways I’m gaining facility with those tools, and the progress of the research itself.

What Is a Conspiracy Theory?

In the philosophical literature on conspiracy theories, several definitions have been floated, but there is no agreed upon way of understanding the term. As a result, it can be difficult to know whether there is a connection between what the philosopher in question is discussing and what is commonly taken to be a conspiracy theory. In the psychological and sociological literature on conspiracy theories, much less attention is paid to questions of definition, with certain “paradigmatic” theories normally being presented as conspiracy theories. In these cases, it is reasonable to wonder if the theories presented as “paradigmatic” are actually atypical in some respects, barring some evidence that they actually are typical. In both the philosophical and psychological/sociological cases, I am concerned that choices of particular conspiracy theories might be the result of unintentional “cherry-picking” of examples, which would threaten to skew accounts.

To solve this problem, I am inspired by Paul Thagard’s study presented in “Creative Combination of Representations: Scientific Discovery and Technological Innovation,” in his collection “The Cognitive Science of Science: Explanation, Discovery, and Conceptual Change.” In that study, Thagard investigates two texts, one an anthology of important scientific discoveries, the other an anthology of important inventions. For each text, he goes through each entry, coding for the presence of certain features. This allows him to give an empirically informed account of typical features of both scientific discovery and technological innovation (specifically with regard to their use of representational combination). While there are still reasons to be wary of treating these features as characteristic (e.g., it might be that the most important scientific discoveries are actually atypical cases of scientific discovery), this is at least a good effort at moving away from cherrypicking examples.

In my own study, I have selected an anthology of various conspiracy theories. The text is “Conspiracies and Secret Societies: The Complete Dossier” by Brad and Sherry Steiger. 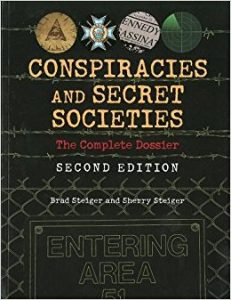 I have selected several features to look for in the entries. In particular, my own hypothesis is that conspiracy theories typically utilize appeals to coincidence in order to motivate their own acceptance. An appeal to coincidence occurs when a theory criticizes an alternative theory for containing an explanation that involves coincidence. For example, some 9/11 conspiracy theories observe that a number of unusual stock market behaviors with regard to the airlines involved were exhibited in the days leading up to the attack, and that this led to a great deal of profit on the part of the investors. One way to explain this would be to say it was a coincidence. The conspiracy theorists insist instead that it is evidence of insider trading among people who had knowledge of the planned attack. This substitution of conspiracy for coincidence is, I predict, typical of conspiracy theories in general.

Two lab assistants and I are working through the book and coding for the presence of the chosen features. The hope is that we will be able to make some empirically informed judgments about what features are typical of conspiracy theories. In addition to this strategy, I will utilize some text mining strategies in order to both check our own conclusions and look for other typical features we may have missed. Although the amount of text in the book is fairly small, the hope is that a meaningful topic model might be developed in order to see if the groupings that we notice ourselves emerge in the model as well. This would give us some additional evidence to be satisfied with our own coding. It could also be the case that the model could reveal certain other groupings based around features we had not coded for that we could then independently check. In the end, the hope is that we will be able to give examples of paradigmatic conspiracy theories and have some empirical backing for our choices.

In my next post, I will discuss the second component of my research project: an investigation into why conspiracy theories are so appealing to people.