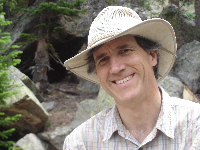 He has been at the University of Illinois since completing doctoral studies in applied economics at the Stanford University Food Research Institute in 1992. His research has been motivated by a desire to understand the relationship between market institutions and poverty in developing countries. Most of this research has related to Eastern and Southern Africa, with some work in other regions of Africa and Latin America. Winter-Nelson has also been active in developing academic programs and has served as graduate program director in the Center for African Studies and the Department of Agricultural and Consumer Economics.