This morning was our last time waking up on Isla Puná. While our luggage was being stacked onto the bike carts, the team looked sad to be leaving. Actually, now that I think about it, the appearance may have been due to waking up before 6 A.M.  Once all the luggage was loaded, we walked along side the carts to the dock. While waiting, Mercedes came out of her home to offer us breakfast sandwiches and coffee with sugar for the ride. Most people fell asleep or came close to it on the boat, then we transferred into the bus and drove back to the Wyndham.

Back at the hotel, breakfast was still being served so we all ate a “brunch.”  Our luggage and equipment were stored since we could not check in yet and we loaded back into the bus to head to a National Park. Isla Santay, un Área Nacional de Recreación, is an island located between Guayaquil and Durán. We had to walk across a very long bridge which we passed under to get to and back from Isla Puná. We walked the Ecoaldea trail which was 1.8 km one way. It was a boardwalk along the edge of the island with beautiful views of marsh and the occasional very large palm trees. The end of the trail was a rest area with drinks and crafts to purchase as well as cabañas to rent. There were also crocodiles in captivity not too far from the rest area. A local told us that the crocodiles are endangered in Ecuador so they are raising as many as they can there. He said there were 15 in captivity in total. And then there was a short trail to el mirador Huaquillas, a lookout at an inlet for el Rio Guayas into the island.

Eventually, we returned to the hotel where we split into two groups. One group worked on lab work while the other group got ready for dinner. The groups switched and then we met in the lobby to head to what was described as a “fancy” dinner with members of Interagua. People wore the best clothes they packed, but no one was expecting what was arranged for us. We were taken to the top floor of the Banker’s Club where we socialized with trainees of Interagua who were a couple years older than us. Once seated, we were welcomed with a speech from an executive member of Interagua as well as a speech and gratitude from Benito Mariñas. Everything was amazing from the food, decor, and spa inside the bathroom, to the Spanglish conversation about our work and theirs. Juan Pablo described it as polar opposites going from Isla Puná to the top floor of the Banker’s Club. We concluded with a photo on a staircase that is famous for taking pictures at the Banker’s Club. Numbers and What’s App info were exchanged before we loaded on the bus to head back to the hotel to end our day. 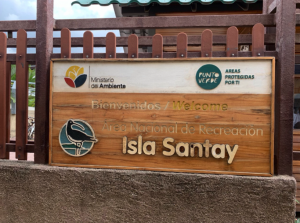 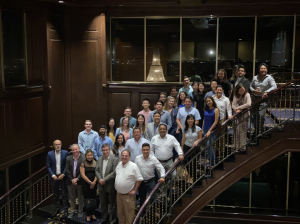