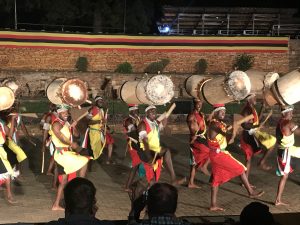 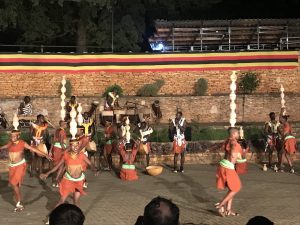 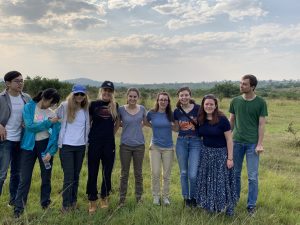 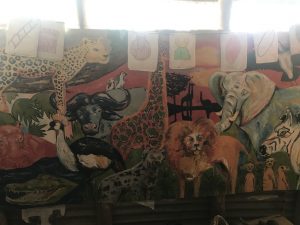 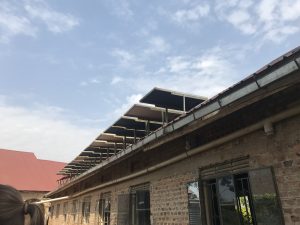 Friday morning we got up early to leave Mbarara and head back to Kampala. We had two stops on the way back at schools! The first school was one of Peter’s projects where we got a tour of all the facilities. The second school was where Peter’s two daughters attended. We ended the day with a surprise performance in Kampala!

Before we arrived at the first school we stopped on the side of the road because we saw zebras! When we arrived at the first school we met Peter’s mother and some of his brothers. Then they and the headmaster showed us around the school and into some classes. We saw that they had a science lab with some chemistry materials and many vocational classrooms for things like sewing and soap making. They also were completing construction to build more classrooms as some of the classes are currently in an old chicken house. They also had lots of food growing on a farm there so we got to see coffee beans up close and some people tried them. We spoke with a crowd of students in the cafeteria and Gabi led us in asking questions and handing out prizes! During this meeting with the students we found out that they were going to name one of the new construction buildings “Benito” after professor Mariñas!

We then went to lunch at an outdoor restaurant in a town nearby. We got a buffet and ate quickly so we could go to the next school. A former CEE449 student, Anjana, who is now working in Uganda met us there and told us about her NGO, Brick by Brick.

The next school we went to was where Peter’s daughters attend, and it was an all girls boarding school. This school had a very beautiful campus and lots of useful facilities including a fairly large computer lab. They had the beginnings of a library for the girls but it needed many more books. We spoke to a group of girls at this school and handed out prizes, although we had to go quick as we were running low on time.

After we got back into the cars, we started to head back to Kampala. We all knew Peter was planning a surprise for us, so we couldn’t wait to find out what it was! As we were running late, we did not have time to stop at the hotel and went straight to the surprise. It turns out it was a performance show of songs and dance of many local cultures in Uganda. Everyone really enjoyed the performance and thought learning about all this culture and history was very interesting. They performed dances and music from many different regions in Uganda. We even got to dance at the end too!

Finally we headed back to the hotel after everyone finished dancing. Most people were very exhausted so everyone fell asleep very easily from our long day and got rested before our last day in Uganda!