(by Meghan Drew and Nicole Loza)

The travel team woke up on March 1st ready to explore different communities in Villalba and interact with the community members. The team gained an additional member today – Adrian, the 12-yr old son of one of the team members, decided to follow in his parents’ footsteps and help the team interact with the community members. After a hardy hotel breakfast, the team travelled to Sierritas and met Esteban – the vice-president of the water board who showed the CEE 449 team around the community: 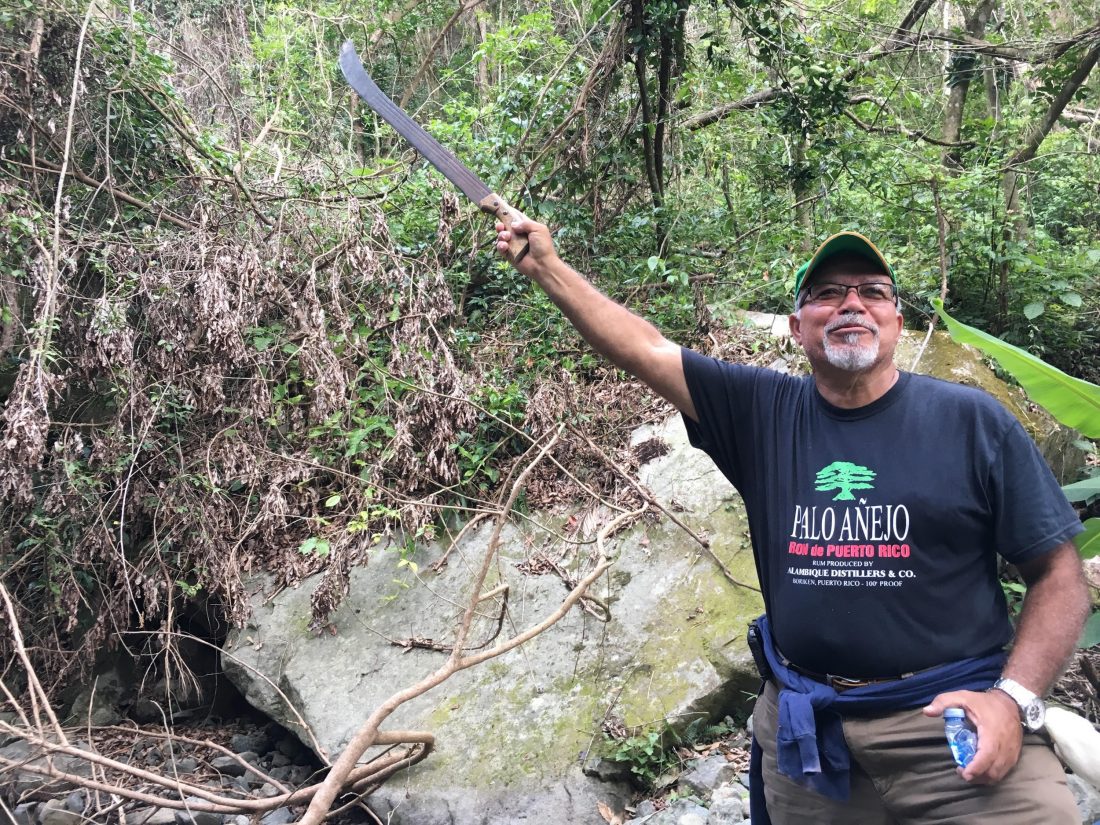 At the first pit stop, the team sampled water from a tank that supplies the water for 150 homes in Sierritas. The tank is gravity fed from a source up the mountain. No treatment is done besides a wide filter at the entrance of the intake pipe to block leaves or other large debris. The only way to sample the water was to climb to the top of the tank. 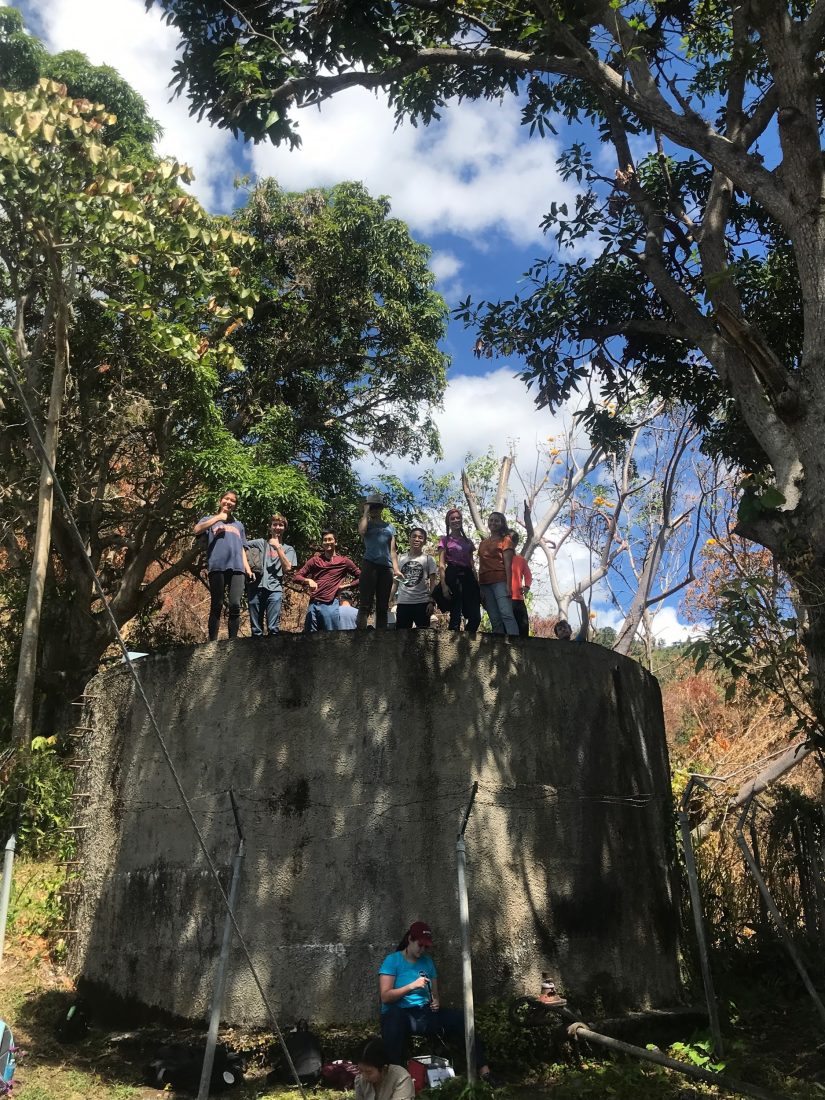 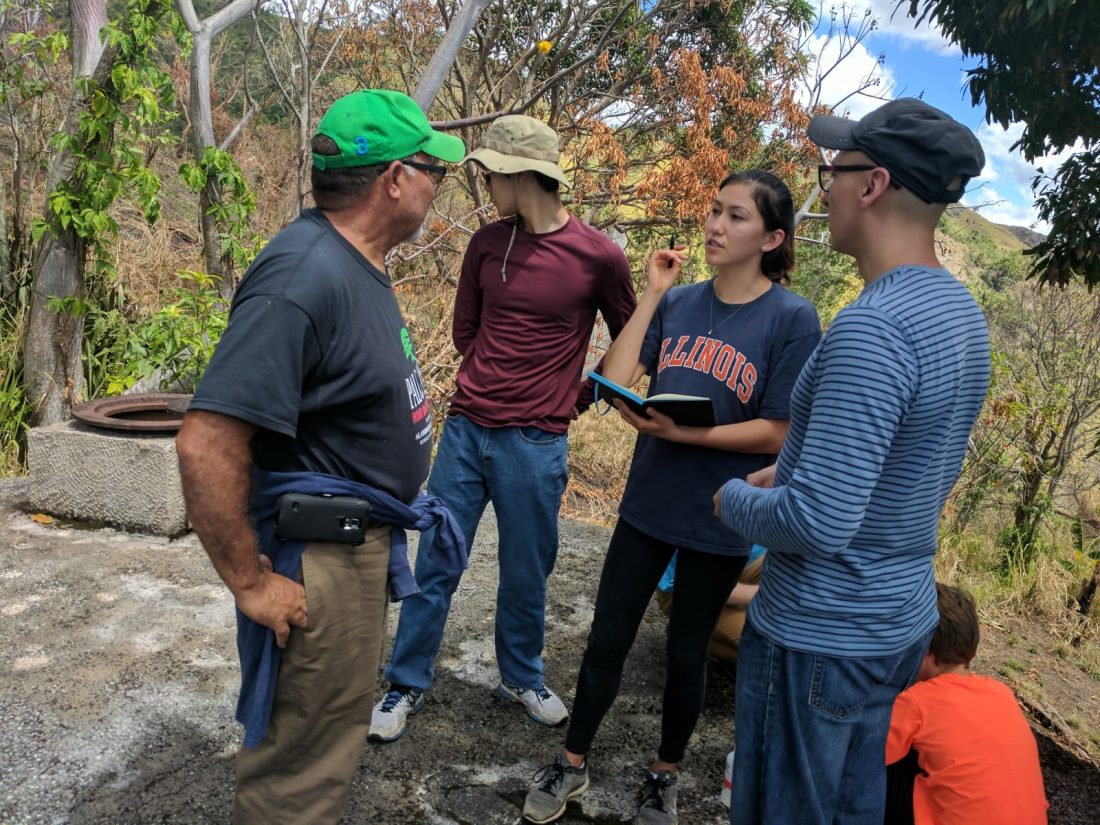 Volume of the tank and flow rate were estimated by Esteban, Kevin, Jacqueline, and Bernardo (pictured in this order). 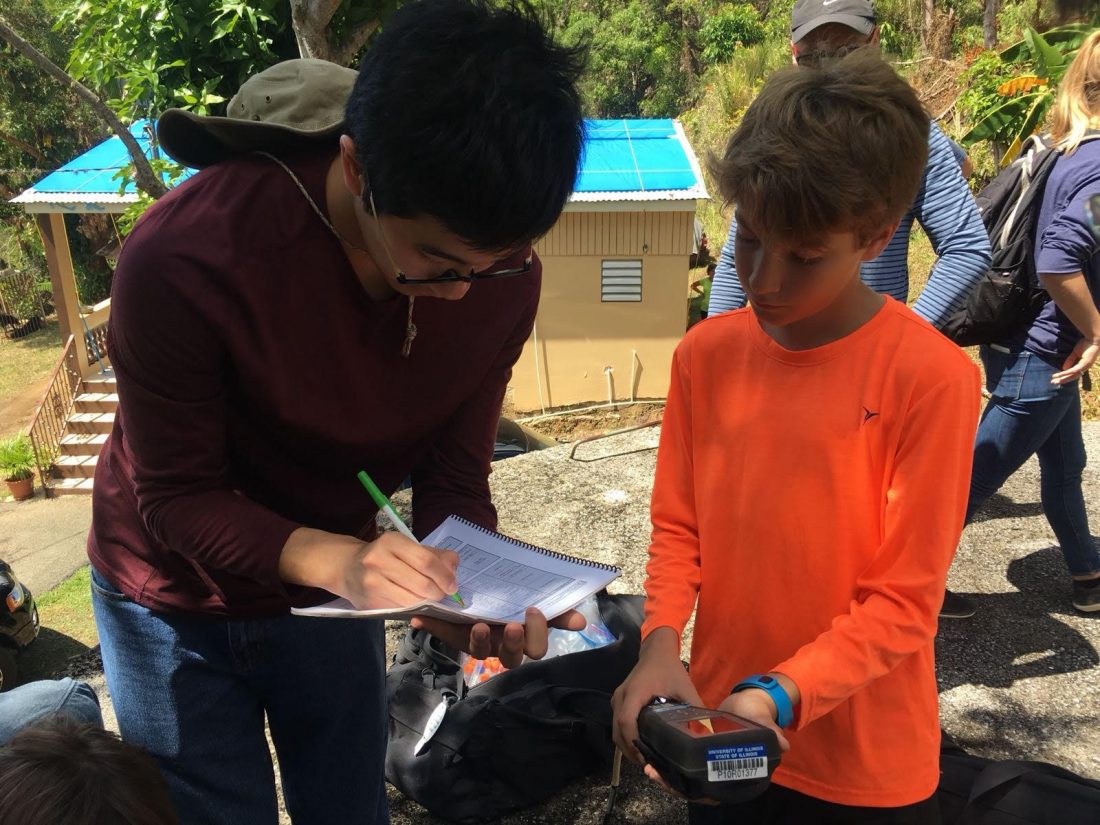 Adrian oversaw Kevin’s data input to make sure the results were recorded accurately and learned how to use an Horiba probe.

The next pit stop on the team’s agenda included a hike up to the Sierritas water source and a few community member interviews. The students split; many hiked while a few with an expertise in Spanish stayed behind to conduct the interviews. The hike featured many physical obstacles for the team, but the guidance of Esteban and a special animal friend helped lead the way. 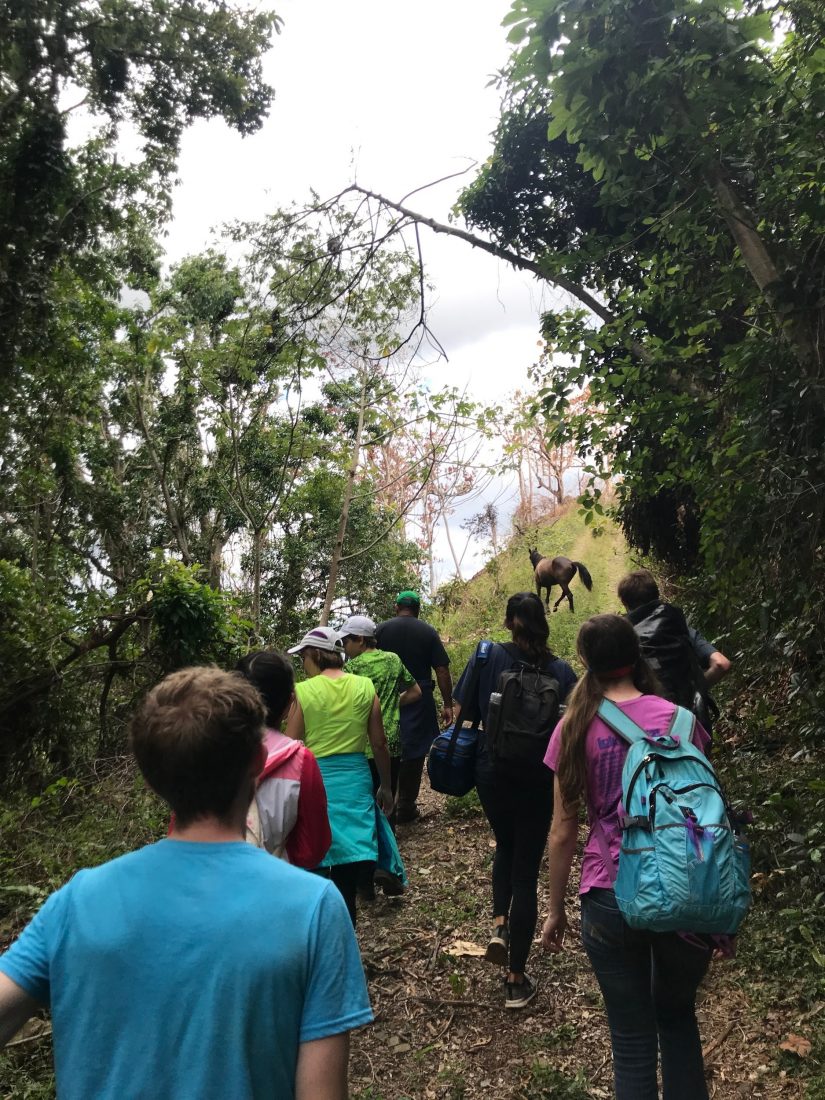 Once making it to the water source, the team took samples and performed on-site tests. The YSI and Horiba probes were used to test pH, dissolved oxygen, chloride, nitrate, and more, while fluoride and ammonia tests were also performed. A surprising discovery was the presence of free chlorine in the source water – the team suspects that the test reading is not in fact a value for chlorine concentration, since the presence of chlorine is unlikely in untreated surface water. Further analysis was required to elucidate these results. 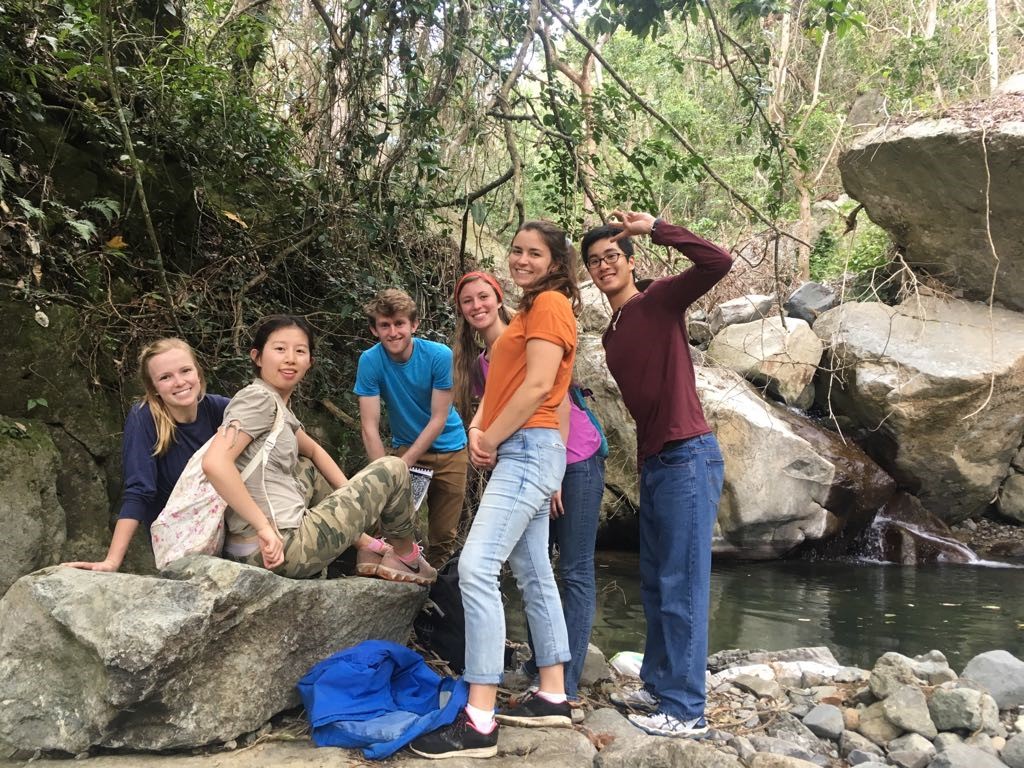 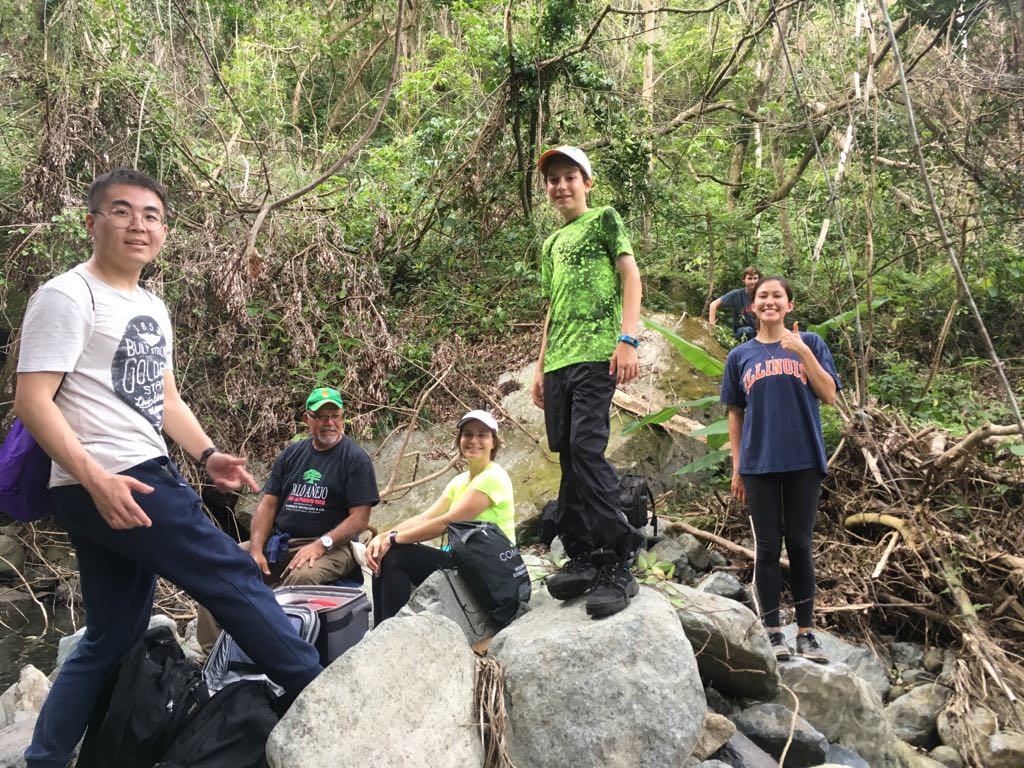 After a successful hike back down to the Sierritas water tank and our cars, the team headed into the community to meet up with the team members who had been conducting interviews.  More water samples were taken at three of the community members’ homes. Interestingly enough, one of the water test results revealed data that varied from the other water samples in the communities. This may indicate that for this  community member the water comes from a different location than the source water (i.e PRASA). 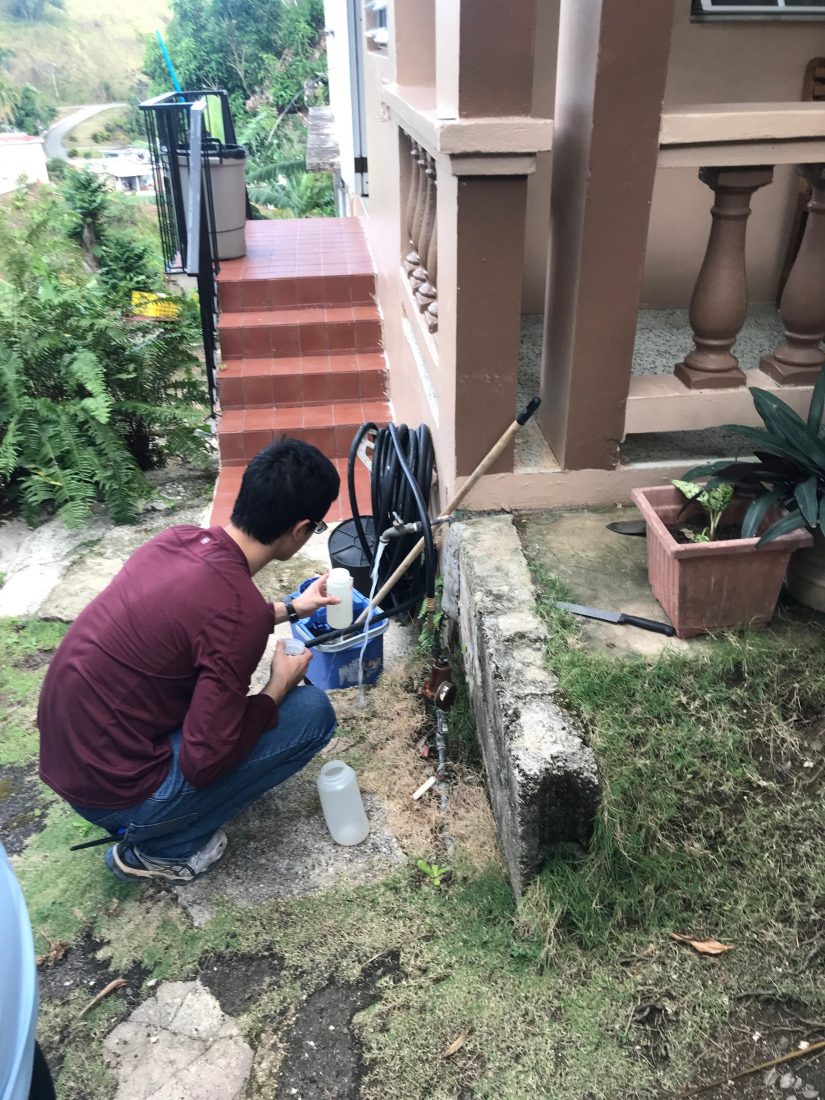 The evening came to a successful close after microbial, metal, and alkalinity and hardness analysis were performed back at the hotel. By day 4, the students worked much more efficiently and were able to test all their collected samples fully within about an hour.