Having had a long two days in the Bweyale area, the team prepared for the penultimate day here. After a sumptuous breakfast highlighted by some juicy pineapple juice, the team convened to plan for our first stop- the Arnold Primary School, which is partly funded by the UNHCR. It was an overwhelming sight to see the students pouring out of their classrooms and surrounding us with curiosity as we stepped into the yard. A hundred handshakes and plenty of pictures later, the team finally proceeded with the teachers to a larger compound for a short presentation on good drinking water practices. The team specifically educated the students on the use of WaterGuard before drinking water drawn from wells, the ill effects of excessive fluoride in water and the invisible transfer of dangerous pathogens through contact.

We learned that the school has a severe shortage of funds, which was evident in a regrettable student-teacher ratio of almost 180. After surveying the compound, it was determined that there was great potential for rainwater harvesting on the large roofs of the school buildings, and for the construction of a storage tank to hold municipal water in times of shortage. Two borewells were also surveyed in close proximity to the school (~100m radius) and the water was found to be turbid in one and with high amounts of chlorine in the other.

The team headed back to the hotel to brainstorm potential projects that could be implemented in the communities visited so far. Following this, part of the team visited the Kiryondongo General Hospital to collect water samples for microbial tests. Also, the hospital administrator gave us a tour of their laboratory, in which approximately 80% of their lab work consists of testing for Malaria. The other part of the team headed to Cluster E in the Kiryondongo Refugee Settlement to interview refugees at their homes where we also collected some water samples. In one of the interviews, the mother informed us that if she gets to the borehole at 7 a.m. then she will return to her home around 1 p.m. Even though the borehole is only about 1 km away from the village, people will get there hours before the well is open just to get their spot in line. Other households told us that the water does not taste good and frequently causes headaches and stomach aches. After the interviews, the team returned to the hotel early to finish up lab work before dinner due to a very early start the next day! 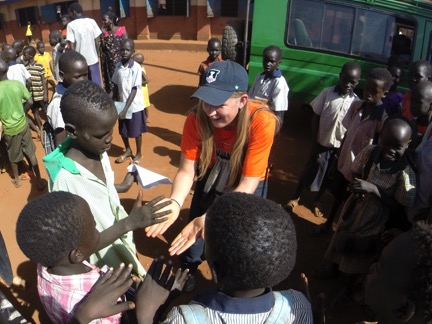 Interacting with young students at the primary school.